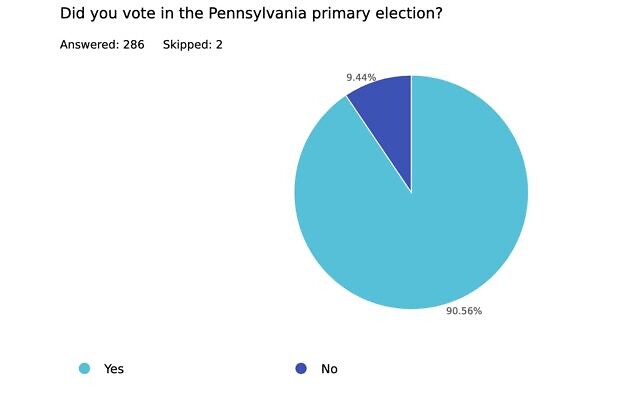 Last week, the Chronicle asked its readers in an electronic poll the following question: “Did you vote in the Pennsylvania primary election?” Of the 288 people who responded, 91% said yes and 9% said no. Comments were submitted by 75 people. A few follow.

There should be a choice for those not affiliated with a political party. If you’re not registered as a Democrat or Republican you are not allowed to vote in the primary.

I voted against a candidate that that negative perceptions about Israel.

I am deeply disappointed that Steve Irwin lost. I believe he would have been a tremendous asset to our area and to the U.S. Congress in general.

I haven’t missed an election since I became eligible, although I more and more think of it as an empty gesture.

I am furious at AIPAC PAC interfering in U.S. elections. I am a proud Democrat and a proud Jew, but this doesn’t mean I support everything done by Israel, or that I think a pro-Israel organization should try to interfere on U.S. domestic issues.

I do not belong to the major parties as they are both corrupt. They do not serve the interest of their constituents, only themselves.

Voting should be a requirement for every citizen.

If you don’t vote, you have no right to complain or criticize.

We are all stake-holders in our society. We have the responsibility and the privilege of voting, and we need to make our voices heard.

Have not missed a primary or general election since 1978.

I voted by mail because I am a senior citizen and would have a hard time doing it in person.

No matter how small a race seems, every election is important. We owe it to ourselves to be informed and to make our voices heard by voting. Every time.

The far right must not be allowed to take over Pennsylvania and the nation. Not now. Not ever. If good people stay on the sidelines it may happen. Silence to the far right is complicity with them.

Voting is our civil responsibility, especially if we want to enact change when it comes to important issues.

Pennsylvania needs a voter information pamphlet to explain each candidate’s position. I’ve seen this done in other states and it is extremely helpful. PJC