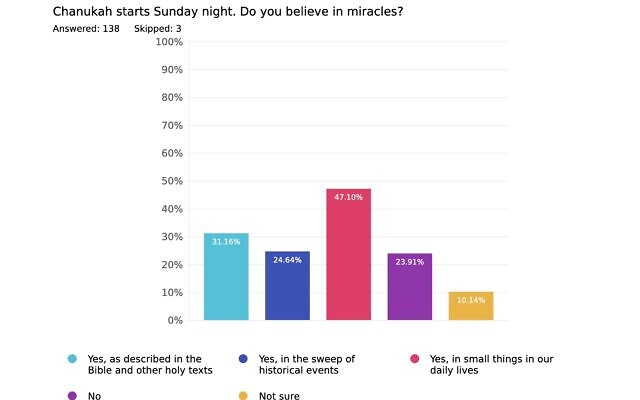 Last week, the Chronicle asked its readers in an electronic poll the following question: “Chanukah starts Sunday night. Do you believe in miracles?” Of the 141 people who responded, 47% said “Yes, in small things in our daily living.” Thirty-one percent said they believed in miracles as described in the Bible and other holy texts, and 25% said they believed in miracles in the sweep of historical events. Twenty-four percent said they did not believe in miracles. Twenty-seven people submitted comments. A few follow.

That Eretz Israel thrives in spite of the legions of hostile, merciless, despicable enemies whose sole raison d’etre is to obliterate it and all Jewish lives can only be described as a miracle. Am Y’Israel Chai!

We sure could use a few.

Since it will be a miracle if our democracy survives, I choose to believe in miracles.

Miracles are real and it’s up to us to recognize and be grateful for them.

Life itself is a miracle.

Belief in miracles is an abdication of responsibility and an example of wishful thinking.

Not everything is in our own human hands. Stuff happens — good and bad — from sources (or A Source) outside our control. Still, that doesn’t excuse us from trying to do our part.

My wife is my miracle

Waking up in the morning and feeling good about life in general; having a wonderful family and a job that I love are miracles in and of themselves. B”H.

Over the years many things have happened that I believe had to be caused by divine intervention. And yet I’m still hesitant to say definitely yes — although I would never say I don’t believe in miracles.

If you believe, really believe, your prayers will be answered. We have to believe there is a power higher than we know.

Miracles small and large abound. How could anyone miss them?

I experienced a miracle while driving through a blizzard on I-70/79 toward Pittsburgh. It was at night and there was no visibility. Suddenly, a truck with a beacon appeared in front of me, going my exact speed. It led me to the intersection of I-70 and I-79. When it veered off onto I-70, another truck with a beacon appeared and let me all the way into Pittsburgh. They were my “guardian angels!” PJC