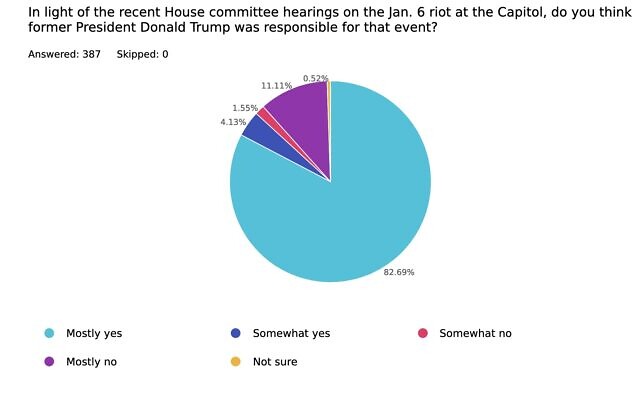 Last week, the Chronicle asked its readers in an electronic poll the following question: “In light of the recent House committee hearings on the Jan. 6 riot at the Capitol, do you think former President Donald Trump was responsible for that event?” Of the 387 people who responded, 83% said “mostly yes”; 4% said “somewhat yes”; 11% said “mostly no”; and 2% said “somewhat no.” Comments were submitted by 119 people. A few follow.

Trump is guilty of treason, as are many of his former aides and officials. They have to be held responsible in order to prevent future attempts to overthrow our democracy.

Absolutely and without question yes, for which he should be prosecuted.

Democrats are destroying our economy and our country — city by city, county by county, state by state. This is all a distraction so that Americans don’t see what they are doing.

Trump is guilty and so is his inner circle, but unfortunately nothing will happen to any of them!

Pathetic how many people still believe The Lie and how many Republicans publicly deny the truth for fear of losing status.

The Dems just want a distraction from high inflation and other present political problems. The House committee is biased and skewed — politically — to distract from the recent Democratic failures in their political agenda.

He should be found guilty of sedition and imprisoned.

He was absolutely responsible and led the charge for the malicious, deadly, unjustified events of Jan. 6. But he does not stand alone. There were many in Congress, the Justice Department, the White House and more who were complicit!

It was obvious from the outset that he was encouraging his people to cause mayhem at the Capitol. I was watching that day and couldn’t believe what I was seeing.

Not “mostly yes”; instead, “completely responsible.”

I can’t understand why the Democrats are all about bringing down Trump. During his four years, our country prospered! He is a competent businessman but all the Dems focused on were his tweets (albeit inappropriate at times). Look what a terrible mess we are in right now! Biden is incompetent and his handlers know it. He can’t even read the teleprompter correctly. Leave Trump alone and fix the mess this administration has created.

Absolutely. I know a fascist megalomaniac when I see one.