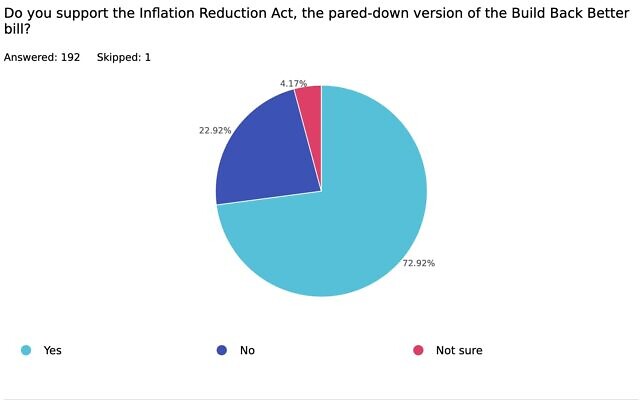 Last week, the Chronicle asked its readers in an electronic poll the following question: “Do you support the Inflation Reduction Act, the pared-down version of the Build Back Better bill?” Of the 193 people who responded, 73% said yes; 23% said n”; and 4% said they weren’t sure. Forty-five people submitted comments. A few follow.

The bill is a once-in-a-generation investment in combating climate change, at a time when we have no more time to waste. Its cap on out-of-pocket prescription medication costs will be life-changing for thousands of seniors. And, it shrinks the deficit at the same time. What is sad is that not a single Senate Republican could put their constituents first and vote for the bill.

I believe people need to sit back and think things through. This will generate jobs — good-paying jobs that people clamor for. It will help the economy and propel the country forward as we move toward a reduction in use of fossil fuel.

It has nothing to do with reducing inflation. It’s just a gimmicky name to pass a political agenda. Giving tax credits to people who can afford a $100,000 electric car does not sound progressive. The ability for Medicare to negotiate drug prices is a good provision and is long overdue.

The bill is not really going to have much effect on inflation but is a major step in the right direction of reducing fossil fuel energy usage over the next decade. It is a good compromise to allow more domestic oil and natural gas production that we need for economic security.

Not as comprehensive as I would have liked. But something is better than nothing! And it includes more positive measures than anything Congress has passed before.

This is a huge win for people: finally allowing Medicare to negotiate (and so, lower) drug costs, moving us away from our reliance on fossil fuels by many strategies, including incentivizing EVs, not raising taxes on individuals or families — but getting more people to pay what they already owe by returning teeth to the IRS and getting wealthy corporations to actually pay their taxes.

The name of this legislation is misleading. Upon reading it, it’s obvious that it will — mostly, actually — increase inflation.

I support climate change legislation. This is not an inflation reduction act and it would be nice for Congress to stop making up false names for bills. PJC