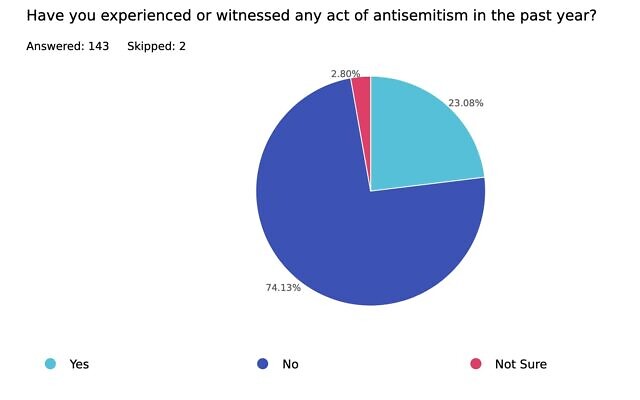 Last week, the Chronicle asked its readers in an electronic poll the following question: “Have you experienced or witnessed any act of antisemitism in the past year?” Of the 145 people who responded, 74% said no and 23% said yes. Three percent said they weren’t sure. Thirty-one submitted comments. A few follow.

What bothered me most about this incident is that the person who said, “I Jewed him down” didn’t even realize she was being antisemitic.

Minor: Someone yelled a bit of an insult about being Jewish over a minor traffic delay I was part of at.

It is more subtle than it used to be at least for Western-looking Jews.

I’ve seen lots of anti-Israel and anti-Zionist sentiment, which, at the end of the day, is the same as antisemitism. Without Israel, we Jews will have no chance of survival. When I see Jews supporting these groups, I think that they must be ignorant of our history.

At my age, antisemitism isn’t new, but the last time I experienced it was at grammar school on Easter when kids from a Catholic school yelled “Jesus killer” when I passed by.

I live in a very cloistered environment where most of my friends and neighbors are Jewish. Given my lifestyle, it would be rare for me to experience antisemitism.

Not directly toward me, but directed at others in my community via social media.

We need to distinguish between personal antisemitism and political differences about Israel. The second is not antisemitism.

I was in an online forum on racism sponsored by a Lutheran church. A minister insisted that Jews were heavily involved in the slave trade and that we were in control of the media.

A construction worker directing traffic on a job in the city told me they started early in the morning only to be halted when the police arrived because the neighbors complained that they did not want their brick street cut up by the sewer repair. She said, “You know how these Jews can be.” I told her that I was a Jew and set her straight about what she had said. She did apologize.

Yes, from the left. PJC