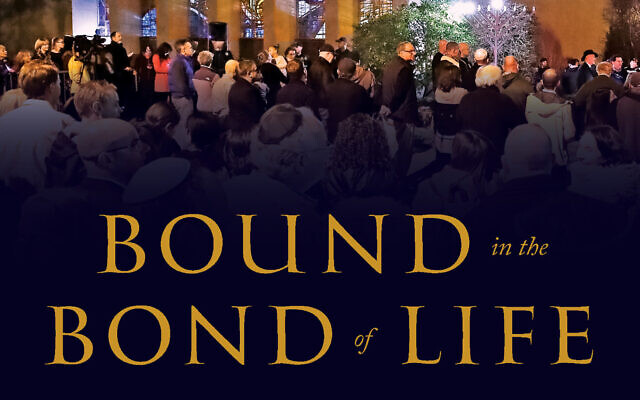 The University of Pittsburgh Press will publish "Bound in the Bond of Life: Pittsburgh Reflect on the Tree of Life Massacre" two years after the tragedy.

Two years after the shooting at the Tree of Life building, “Bound in the Bond of Life: Pittsburgh Writers Reflect on the Tree of Life Tragedy” collects essays from 24 writers as they attempt to make sense of the Oct. 27, 2018, tragedy.

The Pittsburgh journalists, spiritual leaders, historians, writers, poets and academics presented in the collection share their pain, fear, confusion and anger in writings that are scholarly and personal, raw and profound.

Co-editor Beth Kissileff came up with the idea for the book, initially thinking it would be a collaboration with Eric Lidji, director of the Rauh Jewish History Program & Archives at the Senator John Heinz History Center. It was Lidji who initially floated the idea of including other local writers.

“Our prime criteria,” Kissileff said, “was writers, people, that would be able to process the vent through writing. We wanted to be sure that it contained good writing.”

Kissileff is married to Jonathan Perlman, rabbi at New Light Congregation, one of three synagogues that shared the Tree of Life building. Three members of that congregation were murdered during the Oct. 27 attack. Kissileff believed it was important that local voices told their story in the collection.

“We really wanted to elevate the stories and perspectives of local writers. The national media has a certain angle and story and way of framing things,” she said. “A lot of people don’t even realize there were three synagogues involved. So, we made sure there were two writers from each synagogue who wrote for the book. It was really a chance for different perspectives to be heard.”

Lidji explained that the pair originally considered an anthology of previously published pieces but by 2019, the idea evolved to solicit original material from local authors who had unique points of view.

“We feel like this is the beginning of a bigger process,” Lidji said, “allowing people to tell their stories.”

Rather than feature stories by those that were a part of the shooting, “Bound in the Bond of Life” reaches into the broader Jewish and Pittsburgh community. Perlman’s essay in the book, “Eleh Ezkerah, Nusach Pittsburgh,” is the only contribution from someone in the building from the day of the attack. By looking beyond the three synagogues, the geographical limitations of Squirrel Hill and the Jewish faith, Kissileff and Lidji illustrate that, like a pebble dropped into still water, the shooting had effects that rippled throughout Pittsburgh.

In his essay “I Read Somewhere That Pittsburgh is Stronger Than Hate,” Pittsburgh Post-Gazette columnist Tony Norman ties the shooting to others that have captured national attention, including those in Charleston, South Carolina, and Las Vegas, Nevada, and highlights several others, both in the Squirrel Hill neighborhood and the larger city. He ties anti-Semitism to America’s other long simmering hate, racism, illustrating the point with examples from his own life.

Norman said that when first approached, he wasn’t sure what he could add to the anthology. “And then it occurred to me: I’m a member of this community. I was profoundly affected and shocked. You know, I can do this. It will definitely be from a different perspective.”

The columnist said he wrote his essay before George Floyd was murdered while being arrested by Minneapolis Police Officer Derek Chauvin, spurring Black Lives Matter protests.

“There’s an interesting confluence between these things,” Norman said. “And I think people have become much more aware of the fact that there are these tribal hatreds out there. They’re quite primordial and quite deep, and that there needs to be a reckoning. We need to really talk about what this is all about.”

Barbara Burstin teaches courses on the Holocaust and American Jewish history at both the University of Pittsburgh and Carnegie Mellon University. In her essay, “Fall Semester 2018,” she recalls her experience of teaching her first class Tuesday morning following the shooting the previous Shabbat morning.

“Clearly, my experience going into the classroom was pretty dramatic and traumatic,” she said.

Burstin viewed her writing as an opportunity for the community to learn about and celebrate Jewish life and the history of Jewish life. “I wrote to celebrate life and not just death. I think that’s an important message to come out of this,” Burstin said.

Conscious that Jews are often presented as victims in Holocaust lessons, she writes that she tries to underscore the lives Jews led before the Holocaust, talking about their hopes and dreams, accomplishments and disappointments. She worries that because of events like the Tree of Life shooting, American Jews are mired in a swamp of anti-Semitism. When the Tree of Life building is reimagined and rebuilt, she said, “I would hope that a good chunk of that reestablishment would involve the celebration of the Jewish community.”

Historian Laurie Zittrain Eisenberg’s essay “Sharing Their Stories” is unique to the anthology. Instead of addressing her reaction to the shooting, it instead looks at the artifacts left behind by the community to show their grief.

Her writing is accompanied by photos showing both the expected and unusual items people left at the Tree of Life building memorial. In the pictures, there are a pair of tennis shoes next to a menorah surrounded by flowers; a framed leaf from the Raoul Wallenberg Tree on the Righteous Among the Nations Walk in Israel; stones decorated by grieving members of the community; a guitar; and crosses affixed with Jewish stars by a man who has traveled the country leaving white crosses for other shooting victims.

Each of the items shown, and those discussed by Zittrain Eisenberg, are puzzles that the historian and Tree of Life member have attempted to solve by reaching out to the community asking for information about the objects.

“I came up with a project to try and identify the back stories of all the things that people left for us, most of which were left anonymously, or with inadvertent clues as to who the benefactor had been,” she said. “I got over 50 stories that came from people. The essay is kind of my sharing those stories and trying to make sense out of them, trying to find intent and put that in context.”

The historian feels a responsibility to document what she calls the “positive, loving, supportive” response from the community, including those from outside of the Jewish community and Pittsburgh.

In addition to Burstin, Norman and Zittrain Eisenberg, other contributors to the anthology include several current and former writers from the Pittsburgh Post-Gazette including David Shribman, former executive editor of Gazette during the Tree of Life massacre, staff writer Andrew Goldstein and religious editor Peter Smith (the paper won a 2019 Pulitzer Prize for its coverage of the shooting); Pittsburgh Jewish Chronicle Editor Toby Tabachnick; former Director of the Holocaust Center of Pittsburgh Linda F. Hurwitz, Congregation Poale Zedeck Rabbi Daniel Yolkut and author Jane Bernstein.

For Kissileff, serving as a co-editor of a collection of writings trying to comprehend the incomprehensible makes sense.

“There’s not one Jewish way to experience things, but the Talmud is a compilation of ideas,” she said. “Anthology is very much a Jewish genre. We really wanted to put something together that would express and promote a variety of ideas, that there’s just not one way to see the world but you know, that a better comprehension can come from looking at an event from a multiplicity of perspectives.” PJC