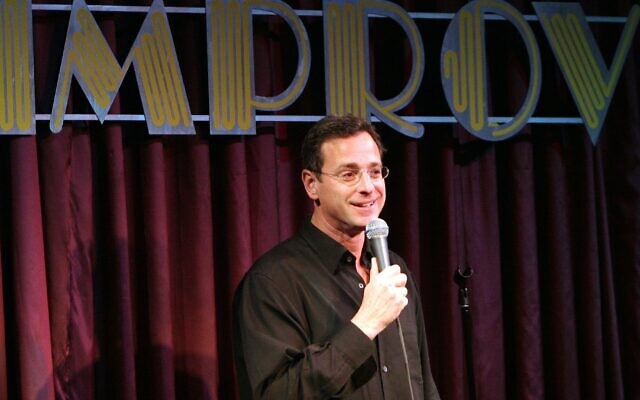 (JTA) — Bob Saget, the comedian and actor famous for playing a wholesome sitcom father figure but who never lost his flair for raunchy comedy, has died at 65.

Saget died shortly after performing in Orlando, where he had delivered a show with his trademark mashup of dark humor and dad jokes that he first developed while misbehaving in Hebrew school.

Saget was found dead in his hotel room in Orlando. The cause of his death is unknown but police do not suspect drugs or foul play.

As a performer, Saget alternated between the raunchy standup comic known for darkly funny bits peppered with curse words and the wholesome dad that he played on the 1990s sitcom “Full House,” bringing together his audiences of children and adults in his role as host of “America’s Funniest Home Videos.”

Even before he got to Hollywood, Saget honed his comedy as a misbehaving Hebrew school student at Temple Israel in Norfolk, Virginia.

“Well, a lot of it was rebellion,” Saget told the Atlanta Jewish Times in 2014. “In my Hebrew school training, I would spend more time trying to impress the girls in the class. I remember the rabbi taking me up to his office and saying ‘Saget, you’re not an entertainer; you have to stop doing this.’ I couldn’t stop.”

After a short stint contributing to CBS’ “The Morning Program,” Saget was cast to play a morning show host on TV. As Danny Tanner on “Full House,” Saget played a widowed dad and morning show host raising three daughters in San Francisco with the help of his brother-in-law and his best friend. Saget played the role until the show ended in 1995 and reprised it in the “Fuller House” reboot that premiered in 2016. In 1989, Saget started hosting “America’s Funniest Home Videos,” which he continued until 1997.

Saget was born in Philadelphia in 1956 to Jewish parents but spent much of his childhood in Norfolk. His father, a supermarket executive, and his mother, a hospital administrator, probably would have preferred to see their son follow through on his original plans to become a doctor. But Saget’s plans changed in high school when his English teacher, Elaine Zimmerman, encouraged him to become a filmmaker. “To the next Groucho-Fellini,” she wrote in his yearbook.

After studying film at Temple University, Saget moved to Los Angeles and became a regular at the Comedy Store, the legendary comedy club famous for launching the careers of comedians like David Letterman and Jay Leno. His comedic role models included Richard Pryor, Rodney Dangerfield and Don Rickles, who, as Saget recalled in 2017, once said of him: “He comes out like a Jewish Clark Kent.”

At the same time that Saget was becoming the most recognizably beloved father in America, he experienced his own share of tragedy within his real family. Saget lost both of his sisters relatively young; Andrea died of a brain aneurysm in 1985 and Gay of systemic scleroderma in 1994. Throughout his career, Saget frequently performed at events to benefit charitable causes and served on the board of the Scleroderma Research Foundation.

In 2021, Saget participated in a Purim spiel, or comedic reading of the Purim story, to benefit the Met Council, in which he played the villain of the story, Haman. “I’m self-loathing, too,” he quipped as he and other members of the cast sounded groggers to drown out Haman’s name.

Saget recalled his Jewish upbringing, including his Hebrew school experience and the Jewish foods his bubbe cooked, in the foreword he wrote for the 2011 book, “Becoming Jewish: The Challenges, Rewards, and Paths to Conversion,” by Rabbi Steven Carr Reuben and Jennifer S. Hanin.

“I was born a Jewish boy. I was circumcised. Thank God by a professional. That is not something you want done by a novice. Or someone doing it for college credit. So I ‘became Jewish’ instantly upon birth,” he wrote.

As a teenager and through college, Saget worked at a deli. Food was an important part of Saget’s Jewish upbringing, especially his bubbe’s stuffed cabbage and mandelbread cookies.

Speaking to Jay Sanderson of the “Jay’s 4 Questions” podcast in 2018, Saget recalled the time he almost got fired from his deli counter job after he stuck a half-smoked cigarette in a carp’s mouth and showed it to a customer who wanted to be sure the carp was fresh. Despite the years he spent grinding carp, Saget never lost his taste for gefilte fish, though he couldn’t stomach the jarred variety. His preferred combination for gefilte fish, he told Sanderson in 2018, was a mix of carp, pike and whitefish.

“The food of the Jewish people stays within me. It is still within me. I am writing this with a matzah ball inside me from 1975. It is next to the kishka,” he wrote in the foreword to “Becoming Jewish.”

Saget did not consider himself to be very observant. But he did feel sense of spirituality on a trip he took to Israel with his parents in the 80s or 90s.

“It was quite a gift and there were many spiritual things that happened throughout and that I think is still the closest I’ve felt, because you can actually see it and feel it in the air in Israel,” he said.

Having lost his sisters and both of his parents — his father in 2007 and his mother in 2014 — at the time of his conversation with Sanderson, Saget talked about the difficulty in feeling spirituality or belief in God after experiencing so much loss.

“I go back and forth with my belief system, by the way. I’m not the best, most observant Jewish person you’ve ever met or talked to, and yet I’m Jewish and proud to be,” he said. PJC