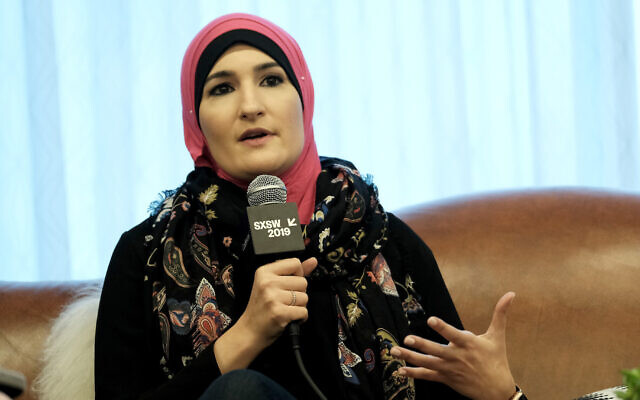 Republicans seized on the forum appearance by Linda Sarsour, shown in 2019, with party officials posting a few seconds on social media. (JTA/Rita Quinn/Getty Images for SXSW)

WASHINGTON (JTA) — Joe Biden, the Democratic presidential nominee, disavowed Palestinian-American activist Linda Sarsour after she appeared at an online meeting of Muslims who will be campaigning for Biden for president.

“Joe Biden has been a strong supporter of Israel and a vehement opponent of anti-Semitism his entire life, and he obviously condemns her views and opposes BDS, as does the Democratic platform,” Andrew Bates, a Biden campaign spokesman, said in a statement Tuesday to CNN, referring to Sarsour’s embrace of the Boycott, Divestment and Sanctions movement targeting Israel. “She has no role in the Biden campaign whatsoever.”

Sarsour had appeared that afternoon at the Democratic National Committee Muslims and Allies virtual assembly. Republicans immediately seized on the appearance, with party officials posting a few seconds on social media.

Sarsour, who was a surrogate for Biden’s primaries rival Bernie Sanders, has been embroiled in multiple controversies over her activism related to Israel, including statements seen as crossing the line into anti-Semitism. Last year she attempted to walk back a recorded statement in which she lambasted progressive Zionists as embracing Jewish supremacy.

“How can you be against white supremacy in America and the idea of being in a state based on race and class, but then you support a state like Israel that is based on supremacy, that is built on the idea that Jews are supreme to everyone else,” Sarsour said at an event. She later said that she was referring specifically to Israel’s recent nation-state law. PJC