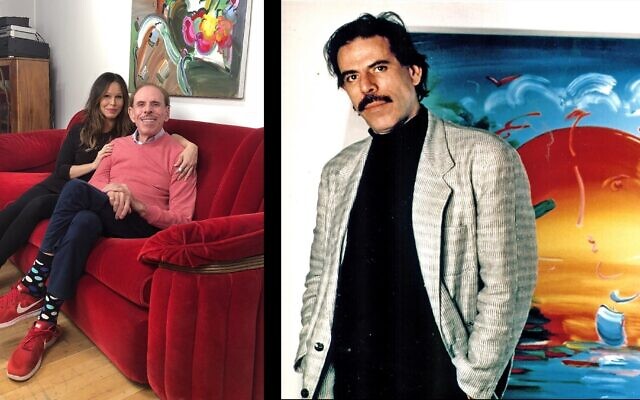 Libra Max, the daughter of famed artist Peter Max, is fighting to free her father from what she claims is an 'irrational' guardianship case. (Courtesy)

(New York Jewish Week) — The latest chapter of the surreal saga over who is making decisions for the aged pop artist Peter Max is pitting two children of Holocaust survivors against each other.

One is Libra Max, Peter Max’s daughter. The other is Barbara Lissner, an attorney who represents Holocaust survivors, including in their efforts to secure restitution. She became Peter Max’s guardian in 2019, shortly after the New York Times first reported alleged abuse by Max’s previous guardian and exploitation by his business associates.

Libra Max is suing Lissner in federal court, saying that Lissner has blocked her access to her father, allowed the artist to be overmedicated, improperly disbursed more than $16 million from Peter’s estate — and even took away his rescue cats.

The protracted saga has been playing out in court for years and reached a new milestone Monday when Peter’s guardianship judge refused Libra’s request to hear medical testimony about Peter’s need for oxygen. According to Libra’s attorney, Jeffrey Eilender, the judge “refused Libra’s request to hold an evidentiary hearing… before the potentially life-and-death decision is made about the removal of [his] oxygen.”

The dizzying allegations allow for little clarity beyond one incontrovertible fact: A 20th-century Jewish artist whose candy-colored psychedelia spoke to hippies and squares alike in the 1960s and ’70s, and who is now 84 and battling severe dementia, appears unable to speak for himself.

Lissner’s law firm, Lissner and Lissner, was started by her husband’s family to provide legal services to Holocaust survivors, according to its web site. Lissner is the daughter of Holocaust survivors, including her father, who was rescued by Oskar Schindler. Among the firm’s services are what it calls Victim of Nazi Persecution Restitution Trusts, through which eligible candidates are able to preserve their assets in the event that they require long-term health care. The firm also offers estate planning, asset protection, Medicaid planning and guardianship proceedings.

After the Times report, Max’s second wife, Mary Balkin — who first sought a guardianship to take over her impaired husband’s business — committed suicide. Within 24 hours, Lissner was appointed by New York State Supreme Court to oversee the artist’s business affairs under a guardianship arrangement that Libra Max at first supported.

Yet Libra soured on Lissner, telling the New York Jewish Week she has not been able to visit her father in his home since June 2019, and that her father’s friends and other family members have not been allowed inside, either. She added that when family and friends have observed Peter via FaceTime, he appears to be sedated.

In 2020, Libra, along with 17 of Peter’s cousins, attempted to remove Lissner as Peter’s guardian in filings submitted to the New York State Supreme Court. She also started a website called Free Peter Max, where thousands of friends, associates and others have signed in support of ending Lissner’s guardianship over the artist.

Libra Max alleges that Lissner has confiscated Peter’s phone, refuses to share medical information with the family and isolated Peter in his Upper West Side apartment, where Libra was born and raised. “The pain of this all for me has been watching my father suffer,” Libra said. “These last three years should have been warm, beautiful and loving. We’ll never get the time back.”

“This is about my father’s human rights,” Libra added. “Why is this man, this beautiful, traditional, Jewish immigrant man, who survived, who came here, who became the American dream, why is he being locked up by the government?”

Peter Max was born Peter Max Finkelstein in 1937, and fled with his family from Berlin to Shanghai in 1939. The family later lived in Haifa and Paris before settling in Bensonhurst, Brooklyn. After attending the Art Students League of New York, he began producing posters, flyers, album covers and even TV commercials featuring kaleidoscopic, counterculture imagery. In 1969 he was featured on the cover of Life magazine, for a profile titled “Portrait of the artist as a very rich man.”

In more recent years he was asked to paint everything from a race car to a cruise ship to a section of the Berlin Wall.

For Libra, her father’s case is an indictment of “abusive” guardianship laws in which elderly or impaired people are isolated from family members and medication is administered as a form of control. In many such cases, she and other critics of the system assert, guardians liquidate their clients’ assets and then intimidate family members and loved ones.

“If you have an ethical person coming in as guardian, even a court-appointed one, the system can actually work,” Libra said. “There were two guardians for a few years [before Lissner] and they did not interfere with our family at all.”

According to Goldfarb Abrand & Salzman, a New York law firm specializing in work with senior citizens, adult guardianships can be an effective legal tool in assisting incapacitated adults who are unable to care for themselves or whose families need assistance to manage their property and financial affairs.

Guardianship cases are brought under the New York Mental Hygiene Law, which is intended to meet the needs of incapacitated adults.

But Libra said that guardianship has been “a welcoming ground for predators,” with the courts and doctors and lawyers all involved.

“It’s a whole money-making process,” Libra said. “They will just put somebody into guardianship. Your estate is completely wiped out, you have less rights than a convicted felon, you can’t even choose your own attorney.”

She now runs the Al Katz Center, based in Florida, which advocates for elders in similar situations nationwide.

The guardianship system, she alleges, is an entire network of guardians, judges, attorneys and service providers working together to prey upon susceptible individuals.

“There is a code of silence,” Katz said. “If you break that code of silence, you will be punished. My dad passed away in 2010 and they are still trying to get his property, still keeping open his estate, which was completely insolvent, and they’re doing that to punish us.”

The Center for Estate Administration Reform has advised on over 3,000 cases nationwide of guardianship abuse since 2014.

“Libra is not just fighting for herself, her father and her family,” Eilender said. “She’s fighting for all the people who are suffering because of an abusive guardianship.”

Meanwhile the legal back and forth goes on. Lissner filed a lawsuit in New York State Supreme Court against Libra for defamation in January 2022, alleging that she has been falsely accused of kidnapping Peter. His son, Adam Max, told the New York Post in January that he backs Lissner in her lawsuit.

Adam Max did not respond to requests for comment.

Now Libra is countersuing in New York State Court: In a filing on June 17, she alleges that Lissner has caused severe emotional distress while lying to the court as well as violating anti-SLAPP laws, which are meant to prevent frivolous lawsuits intended to silence or suppress free speech.

Libra said videos from 2019 show her father in “great health” and saying that he only wants her and her brother making medical decisions for him.

In another video, Peter asks Libra to come upstairs. When she says she cannot because of the guardianship laws, Peter responds saying,“Can I talk to the judge?”

“It’s very clear what his wishes are,” Libra said. PJC