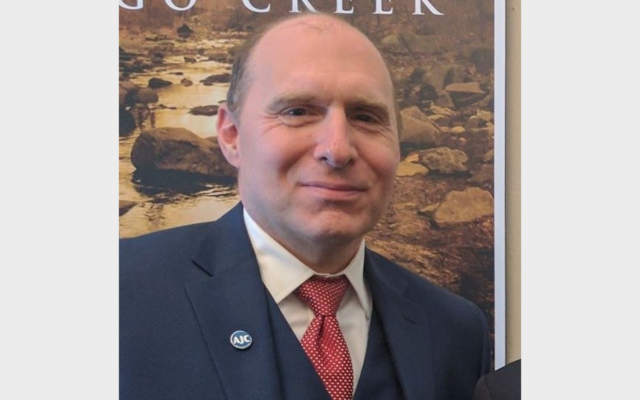 I was just a kid, only 7 or 8. I was walking home from school on a brisk fall day in my kippah and tzitzit, a proud student at Hillel Academy in Bridgeport, Connecticut. With my kippah, I stuck out in my neighborhood. There were no other Jewish kids.

The pennies began to rain down. First a couple and then a torrent. It didn’t last very long, but I could clearly hear the chant of “Jew, Jew, pick up the pennies.”

I ran home confused. That’s when my father explained the concept of anti-Semitism.” You see, he said, some people just hate Jews. They hate us because we are different and sometimes because their religion taught them to. I didn’t fully understand, but I already knew what it meant to feel different. I found myself wearing my baseball cap a lot more.

There were other incidents over the years. Once, an argument ensued about Jesus. I was told that if I didn’t believe in him, I was going to hell. I responded as any good Jewish day school student would, bringing out my chumash (a book containing the Torah) and showing them that they were wrong. It didn’t end well.

We still played at one another’s homes. And some years I even snuck a candy cane home with me at Christmas time. But that is as far as it went.

In American Jewish Committee’s new study on perceptions and experiences of anti-Semitism in the United States, we learned that 21 percent of Americans have never heard the word anti-Semitism and another 25 percent say they had heard it but did not know what it meant.

Much has changed since the pennies fell in 1974.

And yet, 88 percent of American Jews think that anti-Semitism is a problem in our country and 82 percent believe it has been increasing in the last five years, according to the AJC 2020 survey.

Anti-Semitism has taken on new forms. Virulent anti-Zionism — the belief that Israel has no right to exist — has bled into the far left. Violent white supremacy undergirds the xenophobia of the far right. And extremism in the name of Islam has taken hold among religious fanatics around the world. And, still, like my childhood ‘friends,’ ignorance still drives the discussion in many corners of our country. That is probably why only 43% of the general public says anti-Semitism is rising.

In some ways, it would be easy to say, “They just don’t get it.” For most Americans, interacting with Jews is not part of their daily experience. And, for those that do, overt acts of anti-Semitism seem few and often innocuous. An inappropriate joke or stereotype — nothing more.

Thankfully, the attacks in Pittsburgh, Poway, Jersey City and Brooklyn are unusual. Physical violence against Jews is rare. Only 3% report having been attacked in the last five years. But one attack is too many and we must ask, how many do not report? And, in a climate where the average American is thinking about COVID-19 or the economy, these incidents are quickly forgotten.

But anyone who looks at Twitter or other social media platforms can see a different story. Sixty-two percent of American Jews report being targeted by anti-Semites on Facebook, 33% on Twitter. In recent days, following conversations with top AJC officials, Facebook decided to bar Holocaust denial and distortion posts. Anti-Semitic comments, threats to Jewish journalists and public figures are commonplace and they come from all sides. Israel is regularly vilified well beyond criticism of its policies. Social media can sometimes feel like the perfect storm of anti-Semitism.

Sadly, there are no simple answers to root out anti-Semitism. Tech platforms’ codes of conduct, public policy, the courts and the legislative process only go so far. Changing hearts and minds is another matter. Since George Washington’s letter to the Jewish community of Newport in 1790, in which he wrote, “For happily, the Government of the United States gives to bigotry no sanction, to persecution no assistance,” Jews have had good reason to feel secure in our country. But, as we know, America has not always lived up to its ideals. Anti-Semitism persists.

When I was a kid, I had no idea how to stand up to the bullies and fight anti-Semitism head on. A few pennies on their own might not seem like a big deal. But the damage inflicted was. It must stop.

What do we do? What is our role as Jews and American citizens?

We must stand up and call out attacks, physical and otherwise, and demand to be seen and heard. Perpetrators must be held accountable.

In addition, at this time of divisiveness in our country, it is time to stand up for civility and pluralism. When countries thrive, the Jewish community is safer and more secure. No matter what your political affiliation, working to build a more civil and stable America will improve the lives of Jews. By acting as a good citizen, both on and offline, you will lower the temperature in our country. Use your voice to bring people together and watch what happens.

We cannot sit idly by or stay silent. Only by standing up and displaying self-respect will we inspire others to stand with us and eradicate this hatred once and for all. PJC