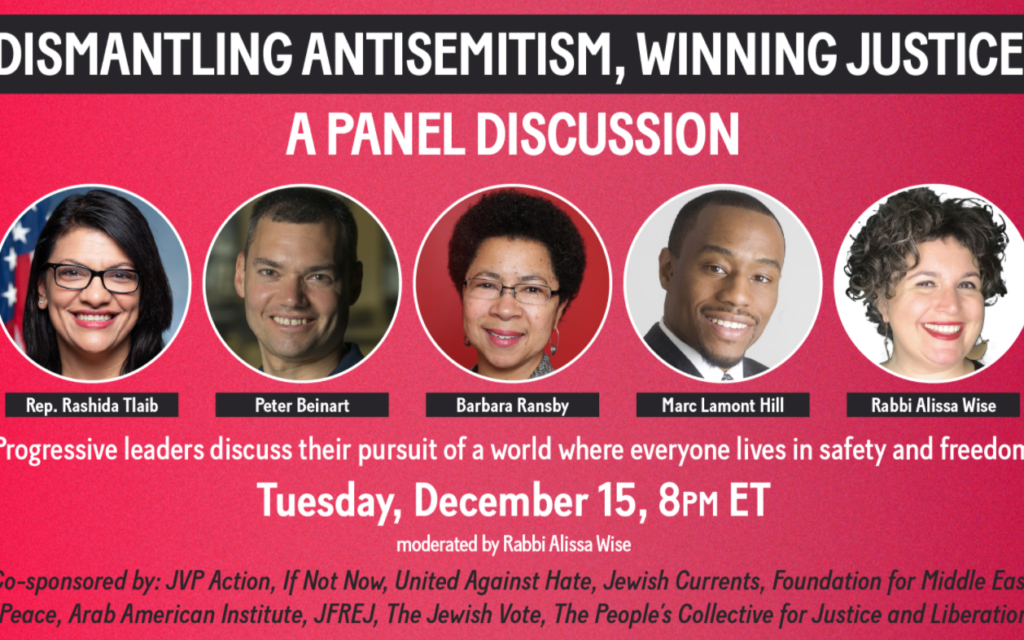 Screenshot of the event information from the JVP Action website

The panel — which will feature figures, such as U.S. Rep. Rashida Tlaib (D-Mich.) and Temple University professor Marc Lamont Hill, who have themselves engaged in anti-Semitic rhetoric, alongside outspoken Israel critic Peter Beinart — has been received with a mixture of shock, dismay and outright bewilderment. The inclusion of these participants in a panel on anti-Semitism is both comically counterproductive and a tacit approval of an intellectual environment in which anti-Semitism is allowed to blossom.

Such an initiative is unsurprising coming from JVP, an organization that openly stated its goal to create a “wedge” within the Jewish community over Israel, and which has long been an ardent supporter of BDS campaigns against the Jewish state. Nor is this the first time that JVP has downplayed the issue of anti-Semitism, stating in 2016, for example, that “anti-Jewish bigotry is not equivalent to the structural oppression” faced by other minority communities.

But even by those standards, the upcoming panel is an especially cynical take on an issue that JVP usually pretends to take seriously.

Indeed, the notion of a panel on anti-Semitism comprised of a non-Jewish majority is emblematic of the increasing hostility towards Jewish voices in academia and civil society. In the current political climate in the United States, it is exceedingly difficult to imagine any other minority group being asked to tolerate such treatment.

A panel on combating racism with little to no representation of people of color, for example, would be met with derision and scorn, let alone the outcry that would rightly ensue were such a panel to include a participant associated with white supremacism. But the same rules don’t seem to apply to discrimination against Jews.

And then there are the panelists themselves. Congresswoman Tlaib, a fervent BDS supporter, openly calls for the end of Israel as a Jewish state and has in the past made comments downplaying Jewish suffering in the Holocaust.

Most recently, she reacted to the nomination of Antony Blinken (a Jew) as secretary of state under the incoming administration of Joe Biden by expressing her hope that he will not “suppress my First Amendment right to speak out against [Israeli Prime Minister Benjamin] Netanyahu’s racist and inhumane policies.” It’s a statement perceived by many to be an anti-Semitic dog whistle.

Hill, an academic, was fired from CNN in 2018 for calling for a free Palestine “from the River to the Sea.” Beinart, the panel’s sole Jew, has recently advocated for the erasure of Israel’s identity as a Jewish state. Barbara Ransby, the panel’s fourth participant and a professor at the University of Illinois at Chicago, has referred to Israel as a “project of apartheid and ethnic cleansing.”

To be clear, criticism of Israel’s policies should not be conflated with anti-Semitism. But calling into question Israel’s right to exist as a Jewish state, a practice in which the panelists engage, undoubtedly should be. The International Holocaust Remembrance Alliance’s working definition of anti-Semitism, adopted by 28 countries, includes denying the Jewish people their right to self-determination.

And even in the absence of such provisions, the choice of JVP and its cosponsors to include figures perceived by a large portion of the Jewish community as openly hostile does little to assuage fears of anti-Semitism in contemporary discourse. In fact, it achieves the opposite.

A telling indicator of this was provided by Beinart himself, who in an interview this week with The Jewish News stated that the panel’s goal was to discuss how “the fight against anti-Semitism has become a way to legitimize bigotry against Palestinians.” In other words, anti-Semitism is not a problem. Rather, accusations of anti-Semitism have made it inconvenient for NGOs to pursue a BDS agenda.

The inability to discuss anti-Semitism without reference to the Palestinian issue betrays a tendency to hold Jews collectively responsible for the actions of the state of Israel, another component of the IHRA working definition.

Anti-Semitism should not be a partisan issue, and conversations about it should not be wielded as political tools. That is a dangerous path, even for the likes of JVP. PJC

David Schiff is deputy editor at NGO Monitor. He grew up in Pittsburgh and lives in Israel. This piece first appeared at JNS.org.