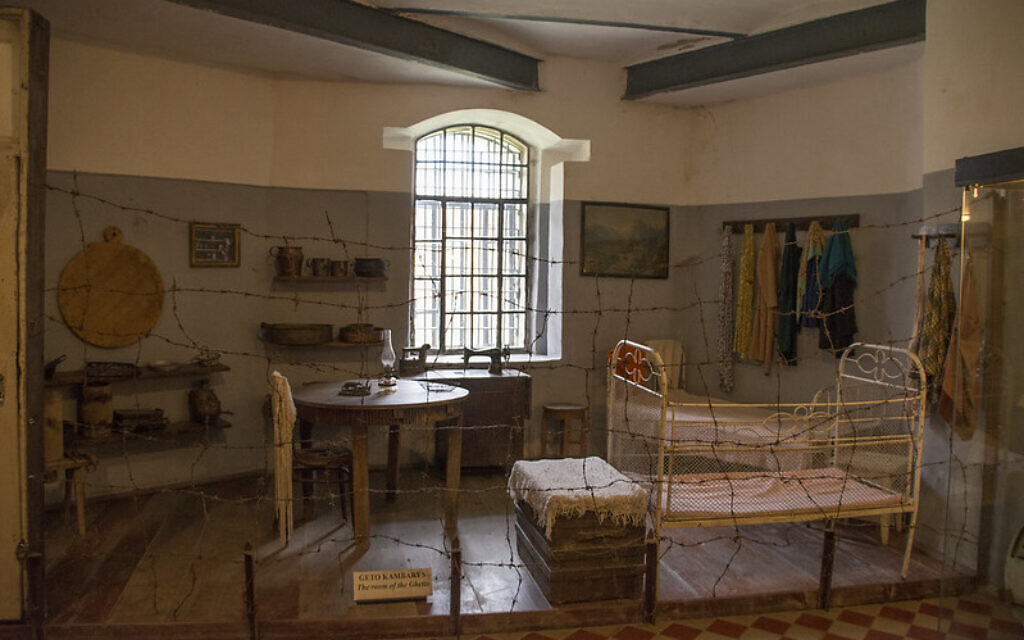 This is a replica of a room in the Kovno ghetto at the museum in the Ninth Fort at Kaunas, Lithuania. Photo by A.Davey courtesy of Flickr.com

This is a story about a Nazi war crimes investigation that began in 1945 and continued intermittently until 2021. It concerns the brutal murder of Jewish infants in Raseiniai (Rasein in Yiddish and Hebrew), Lithuania, and is a good example of why, even today, it is still important to try and achieve justice. This week we observe the International Holocaust Remembrance Day mandated by the United Nations in 2005, and therefore it is an especially appropriate time to share this episode in the ongoing efforts to hold the perpetrators of Holocaust crimes accountable.

In 1945, Leib Kunichowsky, a Lithuanian Jewish survivor of the Kovno (Kaunas) Ghetto, began to record the testimonies of the few Holocaust survivors from the local provincial communities. This was a particularly important mission in view of the extremely high murder rate in those towns and villages. Of the 220,000 Jews who lived in Lithuania under the Nazi occupation, 96.4% (212,000) had been murdered, but most of the survivors were from the large ghettos of Vilna (Vilnius), Kovno (Kaunas), and Shavli (Siauliai). Approximately 100,000 Jews lived in the provincial communities, which had been so terribly decimated at an even higher rate. For the next four years, initially in Lithuania and later in the Displaced Persons camps in Allied-occupied Germany, Kunichowsky sought out the few survivors and recorded their testimonies in Yiddish in longhand, making sure that both he and the survivors personally signed each and every page. The result of this mission was a collection of 1,684 pages of testimony in Yiddish that contained much priceless information about the fate of the provincial Jews.

Kunichowsky’s collection also had another unique aspect, which made it even more valuable. Unlike many other testimony projects conducted at that time, he focused inordinate attention on the identity of the perpetrators, which in Lithuania was of particular significance due to the critical role played by local Nazi collaborators in the murders, especially in the provinces. And since, in almost all those locales, those who participated in the murders were often known to the local Jews, the survivors were able in many cases to identify their tormentors. The result was that Kunichowsky’s collection contained the names of 1,284 Lithuanian perpetrators, a veritable treasure of information of great potential value for prosecutors and investigators.

I first learned of the existence of the testimonies in 1980, while working as a researcher in Israel for the U.S. Justice Department’s Office of Special Investigations, which prosecuted the Nazi war criminals who had immigrated to the United States after World War II. They were very interested in obtaining access to the testimonies. The problem was that Kunichowsky had insisted his collection be published in its entirety, and until that took place, he was not willing to share any of its contents with anybody, for any reason. Thus for 40 years, it remained completely inaccessible. This obstacle was only overcome almost a decade later in late 1989, when Prof. Dov Levin, the leading expert on the Holocaust in the Baltics and, like Kunichowsky, a survivor of the Kovno Ghetto, persuaded him to donate his collection to the Yad Vashem Archives.

Once the collection had been deposited in the archives, I immediately set out, with the help of my father, to extract all the names of perpetrators in the testimonies, a total of 1,284 names, of which only 121 were already known from other sources. My next step was to try and discover whether any of these criminals had emigrated to Western democracies. (By this point, it was common knowledge that thousands of Eastern European Nazi collaborators had immigrated postwar to the U.S., Canada, U.K., Australia, and New Zealand posing as innocent “refugees:”) This was possible by cross-referencing immigration data available in the International Tracing Service (ITS) records (also at Yad Vashem) with the testimonies, and in that manner I was able to find many dozens of suspects who had fled to the West and might still be alive.

The testimonies in the Kunichowsky collection provide vivid details of the implementation of the Final Solution in Lithuania, the exceptionally critical role played by the local collaborators who were by far the majority of the killers, and the incredible cruelty of some of the perpetrators.

One of the testimonies which particularly upset me and clearly reflected the latter phenomenon was that of a woman named Dina Zisa Flum from the town of Rasein (Raseiniai), who survived by hiding in a pile of hay close to the pit where the murders took place in August 1941. In her testimony of April 4, 1945, she related that “While lying on the hay, I clearly saw two women standing near the pit [which the victims fell into after being shot-E.Z.] smashing the skulls of small children with a large rock or hitting the children by smashing their heads together. One of the women was the student K——.”

That image of “the student K.” has not left me ever since. Her family name (which shall remain under wraps for obvious reasons) indicated that she was single, but the witness did not indicate her first name. Even though I did not have her full name, I searched for her in the ITS records and found two possible candidates born two years apart who could fit the description and had fled Lithuania shortly after the war. The names were submitted about 30 years ago to the Nazi war crimes unit established in her emigration destination, but we never received any information on whether the local authorities had been able to ascertain whether either of the two female immigrants might be the infamous “student K.”

Fast forward another 30 years to the present. Our researcher on a different project, Dr. Abbee Corb, comes across my list of potential suspects, which included the two young women who might have been “the student K.,” and finds one of them alive and healthy at 97, residing not that far from her own home. The question then became whether we could verify her first name. In theory, the best solution would have been to send a trustworthy Lithuanian to speak to elderly residents of Raseiniai who may have known “the student K” or her family. But that town is now the COVID-19 capital of Lithuania, so no one is willing to take on the mission. Appeals on social media to find someone with links to Raseiniai residents also failed to produce a solution, but archival research appears to indicate that the elderly woman Abbee found might well be the criminal we have been looking for. Can we confirm it before the pandemic ends or she dies?

I cannot be sure, but I think our efforts, which hopefully will be successful, send an incredibly powerful message: If you brutally murder Jewish babies, there will be Jews, even 80 years later, who will strive to make sure you are held accountable. And that remains an important message in 2021 as well. pjc

Dr. Efraim Zuroff is the chief Nazi-hunter of the Simon Wiesenthal Center and the director of the Center’s Israel Office and Eastern European Affairs. This piece was originally published by JNS.