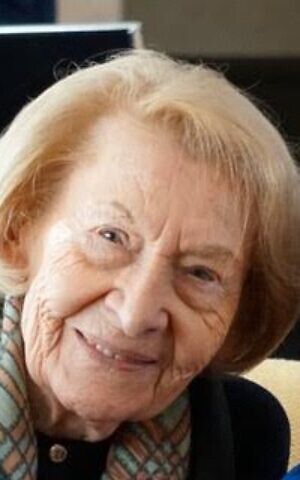 ROCHER: Agnes Rocher, age 94, of Scott Township, Pennsylvania, died on April 11, 2022. She had been a longtime resident of Point Breeze and then Oakland until moving to Providence Point several years ago. Beloved wife of the late George Rocher. She is survived by her son Leslie (Wendy) Rocher and her daughter Veronica (Jonathan) Schmerling; her four grandsons, Benjamin Rocher, Joshua Rocher, Bruce (Ariel) Schmerling and Evan Rocher; and her two great-grandchildren, Isaac and Emma Schmerling. She was also preceded in death by her beloved and talented granddaughter Elizabeth Schmerling. Born in 1928 in what is now Pannonhalma, Hungary, to her late parents, Laszlo and Elizabeth (Fleischmann) Lowy, she enjoyed a happy childhood until World War II. Incarcerated in various concentration and labor camps, she was liberated by the British Army from Bergen-Belsen on April 15, 1945. She was reunited following liberation with her pre-war beau, George, who was incarcerated in the same concentration camp. After George nursed her back to health, they returned to their hometowns in Hungary where they were married in 1946. Leaving Hungary soon thereafter, they worked for ORT to care for and educate Jewish children orphaned by the Holocaust. They settled in Paris in 1947 where their children were born. The family immigrated to the United States in 1960-61, settling in Pittsburgh. Agi, as she was known to her friends, was blessed with a gentle spirit and disposition, but also had the fortitude and strength to address the many challenges that came her way. Elegant and gracious, she brightened any room she entered and put a smile on every face. She enjoyed reading, sewing, gardening, daily walks and spending time with her family. She was famous for her fine European baking that she shared with family, friends and neighbors. She generously supported the Holocaust Center of Pittsburgh’s annual Yom HaShoah program. She was an extraordinary woman who will be missed by family and friends alike. Services at Temple Emanuel of South Hills, 1250 Bower Hill Road, Mt. Lebanon, on Thursday, April 14, 2022, at 10 a.m. Visitation at Temple one hour prior to services (9 – 10 a.m.). Interment Temple Sinai Memorial Park, Plum Boro. Charitable donations may be made in her memory to The Elizabeth S. Schmerling Endowed Scholarship, Attn: Aly Abrams, Washington University in St. Louis, One Brookings Drive, MSC 1202-414-03, St. Louis, MO 63130; the Holocaust Center of Pittsburgh, 0 Woodland Road, Pittsburgh PA 15232; or a charity of one’s choice. Arrangements entrusted to Ralph Schugar Chapel, Inc., family owned and operated. schugar.com. PJC