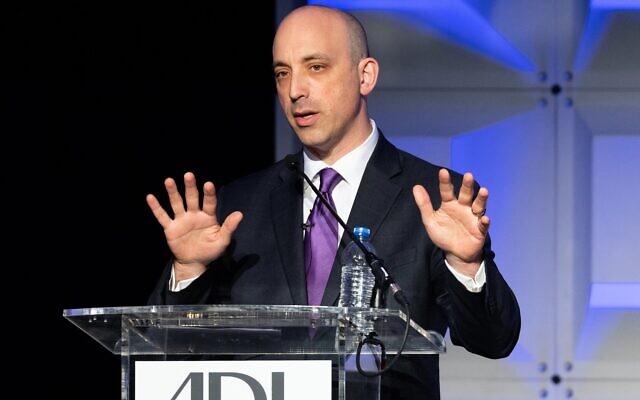 WASHINGTON (JTA) — The Anti-Defamation League CEO, Jonathan Greenblatt, equated anti-Zionism with antisemitism and said its rhetoric runs the same risk of violent outcomes during a speech to the organization’s national leadership summit.

Greenblatt’s speech Sunday, which was held online, comes as both Democrats and Republicans have increasingly charged the other party with tolerating antisemitism. The ADL has appealed to both parties to address antisemitism within their own ranks, but the speech marked a rare moment of the organization unequivocally stating that anti-Zionism is an expression of antisemitism.

Greenblatt in his speech tied the rhetoric from both the right and the left to the spike in antisemitic incidents the ADL reported last week.

“That is why we are seeing this jump in antisemitic incidents — because groups from all sides of the ideological spectrum are using their words to make it OK to hate Jews,” Greenblatt said.

He acknowledged the violence often identified with the far right, but said that did not diminish the risk posed by anti-Zionist rhetoric from the left.

“Unlike their right-wing analogs, these organizations might not have armed themselves or engaged in an insurrection designed to topple our government, but these radical actors indisputably and unapologetically regularly denigrate and dehumanize Jews,” said Greenblatt. He cited attacks on Jews during the Israel-Gaza conflict a year ago.

“Again, I am not diminishing the singular threat of white nationalists; however, as we saw last May, vicious rhetoric is not just an abstract issue,” he said. “No, it is dangerous and destabilizing because it can manifest in the real world and impel individuals to act violently.”

Greenblatt singled out three groups on the left: Jewish Voice for Peace, the Council on American Islamic Relations and Students for Justice in Palestine, for what he said were endorsements of antisemitic conspiracy-mongering and of Palestinian violence in conflict with Israel. He noted the embrace by some of these groups of slogans like “globalize the intifada.”

The term, Greenblatt said, referred to “an armed conflict that ranged from rocks being thrown at soldiers to suicide bombers detonating themselves inside crowded restaurants full of women and children in Jerusalem.” The first and second intifadas were Palestinian uprisings in the 1980s and 1990s and in the early 2000s.

The groups said in reaction that the ADL was marginalizing itself. “What Greenblatt is really announcing is that the ADL is dropping its pretense of dismantling antisemitism and protecting the American Jewish community and is instead solely focused on shielding the Israeli government from accountability,” Jewish Voice for Peace told Jewish Currents.

“The @ADL’s latest unhinged, hypocritical attack on Jewish, Palestinian and Muslim human rights activists is another sign of its isolation and desperation,” CAIR said on Twitter. “The #ADL is increasingly desperate to halt growing support for a #FreePalestine among diverse communities in America.”

The ADL came under fire from Republicans during the Trump administration for its relentless criticisms on former President Donald Trump, criticism Greenblatt once again said was merited. “ADL fought back when candidate Trump leveled slanders against Mexicans and Muslims in 2015… or when President Trump made the preposterous claim that the 2020 election was rigged and that his supporters should ‘fight like hell’,” he said.

His speech Sunday appeared to be a bid by Greenblatt to make clear he would not spare Democrats from criticism.

Calling anti-Zionism an ideology “rooted in rage,” Greenblatt continued, “It is predicated on one concept: the negation of another people, a concept as alien to the modern discourse as white supremacy. It requires a willful denial of even a superficial history of Judaism and the vast history of the Jewish people. And, when an idea is born out of such shocking intolerance, it leads to, well, shocking acts.” PJC