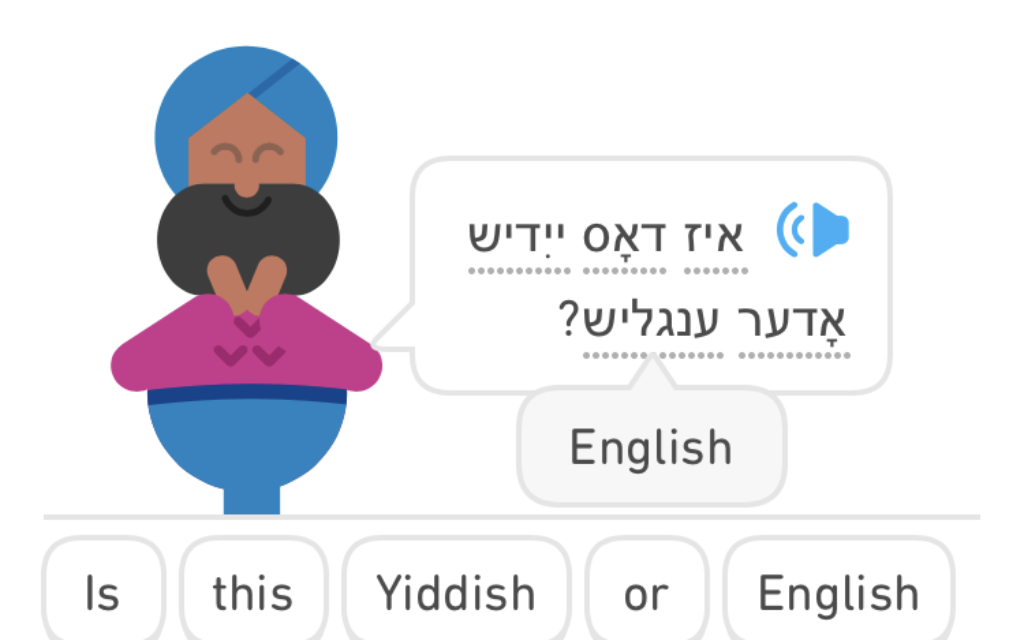 If mastery of Hebrew and Yiddish were required to host a Jewish podcast, I would be out of a job. I butcher Hebrew and my Yiddish is, well, farshtunken. My husband hates it when I “k-vetch” or “k-vell.” It pains him to hear me habitually separate the K and the V.

So the news this week that Yale University will begin offering Yiddish courses and the language learning app Duolingo added Yiddish to its menu was klezmer to my ears. Finally, I can learn to pronounce these words properly. Now there’s even an app for that.

But the study of Yiddish is more than just learning how to enunciate schlep and schmooze and schmutz. It’s about preserving yet another component of European Jewish culture that was almost silenced. It’s a reminder of what we have lost and what we can never allow to happen again.

Experts say there are fewer than a million Yiddish speakers in the world today, down from around 11 million before World War II. More than 85 percent of the six million Jews who died in the Holocaust are believed to have spoken Yiddish, a combination of medieval German that incorporates Hebrew, Polish and Russian. Those who survived and moved to America or Israel assimilated and adopted English or Hebrew.

Yiddish is one of several fading dialects Duolingo has added to its course catalog in recent years. Its Irish course, for example, launched in 2014. (Confession: I didn’t know there was a separate Irish language until last month when American Jewish Committee invited the Irish Consul General and others to recite the Four Questions of Passover.)

To understand the significance of the Yiddish awakening, I reached out to Zalmen Mlotek, the artistic director of the National Yiddish Theater Folksbiene. Mlotek helped create the off-Broadway hit “Fiddler on the Roof” in Yiddish. If any piece of musical theater can tap a trend, “Fidler afn Dakh” certainly did.

Before the pandemic, the production was set to launch an international tour with a cast already selected in Australia, which also became home to a number of Yiddish speakers after World War II.

Mlotek said the American theater was not founded more than a century ago to preserve the language, but to entertain and inform the millions of Jewish immigrants in their lingua franca. It became a staple. The theater was where many immigrants saw plays by William Shakespeare and Leo Tolstoy translated into Yiddish. Now it presents non-Yiddish productions too.
In 2022, it expects to feature the world premiere of “The Garden of the Finzi-Continis,” an English language opera based on the movie about the Holocaust in Italy, and Barry Manilow’s labor of love, “Harmony,” about a vaudeville singing group in 1920s Germany.

The theater offers lessons online and teaches its actors to speak and sing in Yiddish for certain productions, but that’s not the primary purpose, Mlotek said. That’s a byproduct.

He described the revived interest in Yiddish as an arc. Jewish immigrants did everything they could to stop speaking Yiddish and to ensure their children spoke the language of the land. As second, third and fourth generations now seek a connection to their roots, the desire to preserve traditions such as language has gone far beyond nostalgia into full blown revival.
High school and university classes have sprung up in Israel too. Mlotek, who is about to gain a son-in-law in Israel, recently enrolled in Duolingo’s Hebrew classes. Out of curiosity, he will probably enroll in the Yiddish classes too, though he’s already fluent.

I asked him how to conquer my phonetic challenges. He tried to coach me through that KV combination and others. At first it seemed to be working, or as he said, arbetn. “Arbetn,” I repeated, adding that I practically swallowed my tongue to get it right.

Perfect, he kvelled. Maybe there’s hope for me yet. PJC

Manya Brachear Pashman is co-host of People of the Pod, an American Jewish Committee podcast about global affairs through a Jewish lens. This piece is reprinted from The Times of Israel. A version of this piece originally aired on People of the Pod.