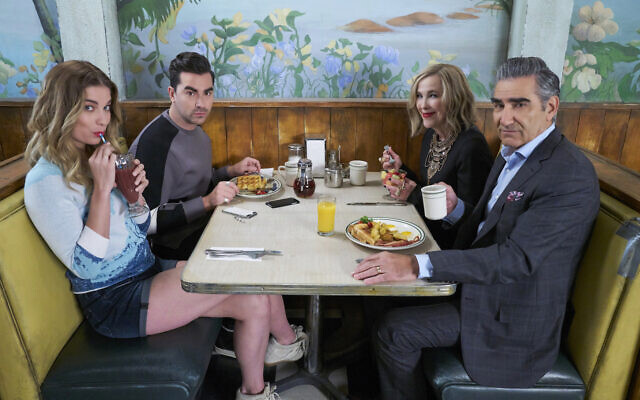 [Editor’s note: This review contains spoilers.]
At this point in 2020, TV audiences have settled on their preferred forms of escapism.

My parents are on what appears to be the 137th season of “The Walking Dead,” engrossed in a zombie dystopia even more gruesome and endless than the one we inhabit. One of my friends, comforted by storylines nestled safely in the past, can’t get enough of historical dramas like “Downton Abbey.”

I gravitate toward lighter fare in my streaming queue. Wholesome reality TV like “Queer Eye,” and hilarious sitcoms like “Parks and Recreation” have graced my laptop screen at some point during the past six months. At a time when so much is uncertain and negative, any show where people are actually decent to each other and the stakes are lower than the average trip to the grocery store strikes the perfect balance between indulgent fantasy and audacious hope.

Pop TV’s beloved comedy “Schitt’s Creek” fits nicely into this comforting lineup. Final Season 6 premiered on its home network on Jan. 7 and hit Netflix on Oct. 3, along with “Best Wishes, Warmest Regards: A Schitt’s Creek Farewell,” a documentary about the making of the show.

The feel-good sitcom follows the Rose family after they lose their fortune and are forced to move into the tiny eponymous rural town Eugene Levy’s Johnny Rose once bought as a joke for his onscreen son David, who is played by Eugene Levy’s real son, Dan Levy. The father and son duo are executive producers and star alongside Catherine O’Hara, who plays Rose family diva matriarch Moira, and Annie Murphy, who portrays socialite daughter Alexis.

After five years on the air, the show has garnered critical acclaim for its emotional depth, dry wit, epic one-liners and creative costume design (Moira Rose has a wig for every occasion). The show won nine Emmys in September.

As far as finales go, Season 6 was exceptionally strong. Each of the Roses got the goodbye they deserved and demonstrated heartwarming emotional growth — particularly regarding their appreciation for family and community — while staying true to the zany quirks that made them so compelling.

Moira makes her triumphant return to show business and learns how to be present for her family. Johnny builds a motel franchise fueled by appreciation for small-town communities and the colorful personalities he clashed with for so long. Alexis transforms her narcissism into healthy independence and sets out to pursue a public relations career in New York. Drama king David finds true love with Noah Reid’s steadfast Patrick Brewer and settles down in the town he was once desperate to flee.

Judaism is not a central theme of the Roses’ story, but the show never lets you forget that David, Alexis and Johnny are Jewish. While Patrick is hopped up on pain meds after his wisdom teeth are removed, he calls David “the Jewish Channing Tatum.” Later, he advises David to stop stress-eating bagels. In a desperate attempt to escape a sex party, the couple excuses themselves to go to their car for their wine.

“It’s just that ours is, um, kosher,” David improvises.

There is even a prayer scene. After Johnny departs for New York with his business partners to pitch their motel franchise to a group of investors, Moira pleads with her children to join her on the floor, join hands and pray for their success.

“To whom it may concern,” she begins reverently. Reader, I shrieked.

David and Patrick’s relationship has been the show’s chief source of cuteness since Patrick serenaded David at an open mic in Season 4, and Season 6 continues that dynamic beautifully. Highlights include Patrick donning his nighttime mouth guard and “nose thing” breathing aid to comfort a humiliated David after he wets the bed, David rallying his reluctant family to attend Patrick’s dream escape room bachelor party and Patrick singing Mariah Carey’s “Always Be My Baby” to David during their wedding vows.

Like all final TV seasons, Season 6 faced the pressure of neatly wrapping up plot and character arcs. It rose to the challenge with countless nods to earlier plot threads.

One particularly successful come-full-circle moment was David and Moira’s trip to Herb Ertlinger Winery, the site of Moira’s glorious drunken train wreck of a fruit wine commercial in Season 1. The pair arrive for a wine tasting and proceed to get accidentally drunk together, much to the irritation of the beleaguered owner. Come for David’s teeth-sucking looks of disgust, stay for Moira tipsily declaring, “Now I’m getting hints of tomato.”

That is not to say the season is without its flaws.

The plotline for Emily Hampshire’s Stevie, David’s best friend and co-owner of Rosebud Motel, felt oddly paced, as she leaves the motel briefly to explore other career options before rapidly returning. Some of the farewells are a little too sickly sweet, such as when Moira’s singing group, the Jazzagals, descend on her for a group hug when she announces she has earned a role on the reboot of her old soap opera.

Some of the gags are more cringeworthy than funny, like Johnny’s discomfort when Alexis starts dating a man who is his age after breaking up with her beloved boyfriend, Dustin Milligan’s Ted.

In the end, these minor issues did not detract from superb storytelling. Moments like David and Patrick’s town hall wedding and Johnny’s last grateful look at the town he called home for three years are just what the doctor ordered to restore our faith in happy endings. PJC

This article was originally published in the Jewish Exponent, an affiliated publication to the Chronicle.