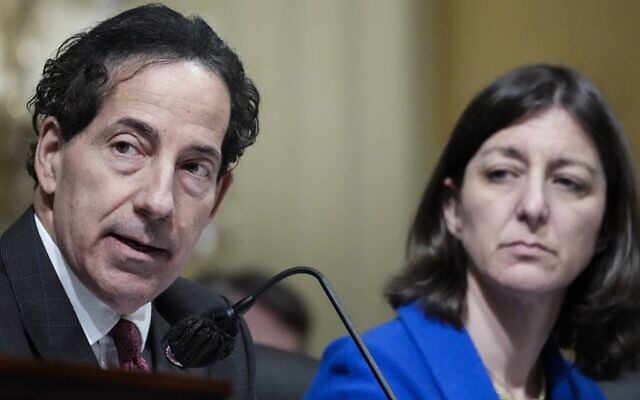 WASHINGTON (JTA) — The U.S. House of Representatives Select Committee investigating the Jan. 6, 2021 riot at the U.S. Capitol is about to tell a story, and it comes with a warning: Some parts might be unsettling to Jews.

The committee, chaired by Rep. Bennie Thompson, a Mississippi Democrat, is launching primetime hearings at 8 p.m. eastern Thursday night. They will be broadcast on ABC, NBC, CBS, MSNBC and CNN. There will be more hearings held intermittently through September.

The goal is to chronicle the events leading up to the riot, and suggest ways for it never to happen again (for Democrats, at least, the goal is also to horrify the public ahead of the fall midterms). The committee has conducted over a thousand interviews and has tens of thousands of pages of documents in hand. Many of their revelations have already leaked to the media.

“People must pay attention,” the committee’s lead Republican, Wyoming Rep. Liz Cheney, told CBS this week. “People must watch, and they must understand how easily our democratic system can unravel if we don’t defend it.”

Cheney has also in recent weeks suggested antisemitism and white supremacy will feature in the committee’s narrative of the plotting. A number of neo-Nazi and conspiracy theory-aligned groups attended the riot.

Cheney, a pro-Israel stalwart, and Adam Kinzinger, the only other Republican on the committee, have effectively been cut off from the rest of the party for agreeing to serve on the commission. Cheney said that the House’s GOP leader, Kevin McCarthy, has resisted the work of the committee because he caters to extremists and antisemites.

Here are five Jewish angles to watch for on Thursday evening as the hearings unfold.

Is antisemitism on the docket?

The first session, Thursday evening, will present a timeline of the events leading up to the riot, and it appears as if the Proud Boys, a far-right organization, will feature prominently. One scheduled witness is Nick Quested, a documentarian who was embedded with the group. Notably, the Justice Department won an indictment against five members of the group for sedition. The charge is rare.

The Proud Boys group — which had members attend the deadly neo-Nazi march in Charlotteville, Virginia in 2017 — has had leaders in the past who have defended Holocaust deniers. Trump appeared to encourage the group’s disruptive tactics in presidential debates.

Watchdogs who track antisemitic and white supremacist extremists warned that the post-election period would likely see expressions of violence from those groups, among others. Some of the rioters openly identified with antisemitic groups and ideas, perhaps most notoriously, the rioter wearing a “Camp Auschwitz” sweatshirt. Prosecutors argued for the continued detention of another rioter in part because his affinity to Hitler made him dangerous to Jews.

Additionally, the actions and statements of a number of Republicans who have become notorious for involvements and comments seen as offensive to Jews could come up during the committee’s presentation. Among them are Georgia’s Marjorie Taylor Greene, Arizona’s Paul Gosar and North Carolina’s Madison Cawthorn.

What about the Jewish rioters, and where are they now?

If the committee succeeds in casting the insurrection as an event spurred in part by bigotry, the decision of those Jews who participated in the riot, in the protests beforehand and in defending Trump — will likely once again draw community scrutiny. Still, these pro-Trump players were relatively marginal and likely will not feature during the hearings.

Nathan Mostofsky, the Jewish judge’s son who wore fur pelts and a bulletproof vest when he joined the raid on the Capitol, pleaded guilty in February and was sentenced last month to eight months in prison for civil disorder and stealing police equipment.

Elliott Resnick said he was at the riot and breached the Capitol in his capacity as editor of The Jewish Press, a politically conservative newspaper aimed at Orthodox readers and based in New York. Except he never filed a report. The paper parted ways with Resnick about a month after his presence at the riot was revealed.

Chaya Raichik, who says she was present during the insurrection, has become a hero to some on the right for her Libs of TikTok Twitter feed, which trolls the LGBTQ community.

David Schoen, the lawyer who defended Trump at his second impeachment trial, drew attention for how he chose to express his Orthodox faith during the proceedings. He has since become the top lay leader at the Zionist Organization of America, and is still involved in Jan. 6 fallout; now he’s representing far-right Trump whisperer Steve Bannon, who faces contempt of Congress charges for failing to head a subpoena issued by House Jan. 6 investigators.

Remember Jared and Ivanka? They’re back in the spotlight.

Washington’s most-talked-about Jewish couple have largely tried to stay out of the public eye since Trump’s 2020 loss, and especially since the Jan. 6 riot. But the public hearings are putting Jared Kushner and Ivanka Trump back in the spotlight.

Kushner, Trump’s Jewish son-in-law and former top adviser, and Ivanka testified to the commission, and there are reports that video excerpts of their testimony will feature.

Most of Trump’s other top former and current advisers have refused to testify. Kushner and Ivanka’s agreement to do so signals their political break with Trump — who says the committee’s work is fraudulent and aimed at keeping him from running in 2024 — looks to be pretty firm.

Kushner also distanced himself from Trump’s post-election maneuvering in part to focus on adding to the Abraham Accords, the normalization agreement between Israel and four Arab countries — Kushner’s and arguably the administration’s most substantive foreign policy achievement.

The hearings come the same week as a New York Times story revealed that Kushner decided to distance himself from the president within days of the election. Kushner’s departure from Trump’s orbit, the article claims, meant that Trump became open to the influence of extreme election deniers like Rudy Giuliani. Ivanka Trump remained close to her father, at least until Jan. 6, when she pleaded with him multiple times to call off the rioters — a circumstance likely to come up in the committee’s presentation.

Are there Jews on the committee?

Of the seven Democrats on the nine-member committee, three are Jewish. Two of them will be reprising their leading roles in Trump’s two impeachments: Adam Schiff of California was the lead prosecutor in impeaching Trump for seeking to solicit election assistance from Ukraine, and Jamie Raskin of Maryland led the impeachment for Trump’s role in the Jan. 6 events.

Also on the committee is Elaine Luria of Virginia, who is up for a tough reelection in a coastal district that often leans Republican. Luria, a Navy veteran, was one of a group of moderate Democrats who in 2019 were instrumental in launching the first Trump impeachment, and faced down angry questions from constituents as a result.

It’s not an exaggeration to say that the Trump presidency and the extremist violence that manifested during it reshaped Jewish organizational priorities. The committee’s findings could consolidate some of the turns organizations have taken. The Anti-Defamation League, for example, is co-counsel in a lawsuit that seeks to cripple the Proud Boys and another extremist group, the Oath Keepers, for their role in planning the insurrection. And Jewish federations, at least in the weeks after the riot, said they would no longer partner with groups on the right that were involved in protesting the election outcome.

Oren Segal, vice president of the ADL’s Center on Extremism, said the insurrection brought home the dangers of the extremism his organization had been tracking and exposing for years.

“What we saw on Jan. 6 was part of a set of activity that we had been warning about for months and years,” he said in an interview. “It wasn’t so much a change of how we view the threat but more of a confirmation.”

He hoped the hearings would convey the breadth of the danger to the viewing public.

“One of the things everybody is going to anticipate is whether these hearings will provide the country with a shared understanding of what happened that day,” Segal said.

The Jewish Federations of North America routinely updates its constituents on best practices on donations. “American Jews understand viscerally that the stability and strength of our democracy are, among other things, prerequisites for the security and safety of our community and other minority communities,” a JFNA spokesman told JTA. ” “As a rule, Jewish Federations do not support any organizations that call for violence, let alone undermine the integrity of our democratic institutions or our free and fair elections.”

The two Jewish Republicans who voted against certifying Joe Biden’s presidential election, even after the violence, are still welcome in Jewish circles.

New York’s Lee Zeldin remains a co-chairman of the bipartisan Congressional Caucus on Black-Jewish Relations, an initiative of the American Jewish Committee, and last month joined Florida Jewish Democrat Debbie Wasserman Schultz in spearheading a resolution condemning antisemitism that passed overwhelmingly. He is running for governor of New York.

Tennessee’s David Kustoff has been endorsed by the political action committee affiliated with the American Israel Public Affairs Committee. The PAC’s decision to endorse dozens of Republicans who voted against Biden’s certification has infuriated Jewish Democrats. PJC