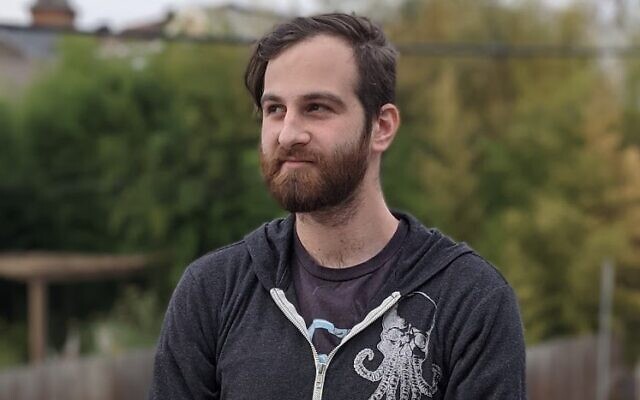 Pittsburgh voters have elected Xander Orenstein, a housing advocate, Carnegie Mellon University alum and passionate Jew, as a city magisterial judge. Orenstein may also be the first out nonbinary person elected to a judicial seat in the United States.

“Any time a candidate makes history, it’s good — and it really signifies another moment showing the full diversity of the LGBTQ community,” said Sean Meloy, vice president of political programs for the LGBTQ Victory Fund, which endorsed Orenstein. “Xander put together a really well-organized campaign, in that they had a clear message that differed from the incumbent and, we feel, spoke to voters.”

“This is a huge honor but also a huge responsibility for our team to take on,” Tasker told the Pittsburgh Current. “We want to make sure we get this right because we’re setting the precedent of how to be openly trans and campaign in this city. Everyone who works on our campaign is LGBTQ, which wasn’t a deliberate choice — it just turns out all the best people for the job happened to be gay. As a trans yinzer, knowing that there would be someone like me in our justice system would be a welcomed radical change.”

Orenstein, 30, of Lawrenceville, beat incumbent Magisterial Court Judge Anthony M. Ceoffe for a six-year term on the bench by just 40 votes out of 2,469 cast in the Lawrenceville area in the spring Democratic primary. Orenstein ran unopposed Nov. 2, after Ceoffe, who won the uncontested Republican primary for the judgeship in the spring, dropped out of the race.

Orenstein’s campaign advocated social justice and more equity in the judicial system, including curtailing the use of cash bails and championing housing rights. That placed them as a real alternative to Ceoffe, who Orenstein said had sided with landlords in housing disputes 97% of the time during the previous 12 years.

“For a judge to prioritize the financial success of a corporate landlord — which, let’s face it, in Pittsburgh a lot of landlords are part of large corporations — over the health of the community is extremely disturbing,” Orenstein told the Current when launching their campaign in February. “My goal in justice is going to ensure compromise and understanding at the center of any decision I make.”

Orenstein, who moved to Pittsburgh 11 years ago, grew up in a modern Orthodox household in suburban Rockville, Maryland, speaks fluent Hebrew and currently observes holidays and enjoys Shabbat dinners at the home of Rabbi Shlomo Silverman, who leads Chabad of Carnegie Mellon University.

Orenstein holds degrees from CMU and Johns Hopkins University. Before working in housing advocacy in Pittsburgh during the COVID-19 pandemic, they were a bench scientist doing disease research, working in cancer and aging labs, and dealing with pharmaceuticals.

“All through my career as a scientist, all I wanted to do was to make the world a better place through my work,” Orenstein told the Chronicle. “I wasn’t able to have the impact I was hoping for.”

Chabad’s Silverman said that since the primary last spring, he has been teaching Orenstein more about the Sanhedrin, assemblies of elders and rabbis who sat on tribunals in every city in ancient Israel, as well as Jewish concepts of law and justice. The lessons are very informal, the rabbi said, and “really are meant to be open discussions and learning.”

“Xander definitely seems passionate,” and “definitely wants to make a difference in the courtroom,” Silverman said. “It’s great whenever I see people going into the community and using their Jewish beliefs to help others.”

Orenstein’s strongest belief when it comes to justice — not law, which they say is different — comes down to treating others with respect and kindness.

The point is illustrated, Orenstein said, by the Talmudic story of a gentile who wanted to convert to Judaism. The man told Rabbi Shammai, a member of the Sanhedrin, that he would accept Judaism only if he would teach him the entire Torah while the prospective convert stood on one foot. Rabbi Shammai would not do it, but Rabbi Hillel, another Sanhedrin member, did, saying, “What is hateful to you, do not do to your neighbor. That is the Torah, the rest is commentary,” Orenstein recounted.

“None of that matters unless the center of who we are as a people is to be kind to others,” Orenstein said. “That’s who I am at my core because I am Jewish.”

They will try to be forgiving as a judge, they said.

“I see justice at its heart as restoration, as making things better across the board,” Orenstein said. “The other approach was focused on punishment, how to reprimand those who had done wrong.”

Orenstein believes those concepts and stances “really resonated with a lot of voters.” The main drive of their campaign was “to treat people kindly, to treat people with respect and to take each case with the seriousness and respect it deserves. We are all people and we all deserve that kind of respect.”

Orenstein, who had three grandparents who survived the Holocaust, said that “Jewish identity is, at its core, a major part of who I am — the idea that I am only here because of the sacrifice of others. That’s just been a part of my family and the center of who we are. Intertwined in this idea is that tikkun olam is the center of what we should be doing as the Jewish people.”

Judaism also taught Orenstein that God is merciful and kind.

Orenstein, though, is quick to note their limitations as well.

“I know I’m not going to solve everything — I’m not going to make the right decision every time,” they said. “But we’re not trying to articulate the ideal of justice, because that’s an impossible thing … But that doesn’t mean we shouldn’t be trying and learning from our mistakes.”

When asked about future plans, Orenstein responded: “Tzedek, tzedek, tirdof,” which translates as “Justice, justice, you shall pursue.”

A law degree is not necessary to be a magisterial judge; one only needs to live in their magisterial district for one year.

“Law is not the same as justice,” Orenstein said. “At the end of the day, the important thing is we that we don’t end up hurting people while we’re getting there.” PJC