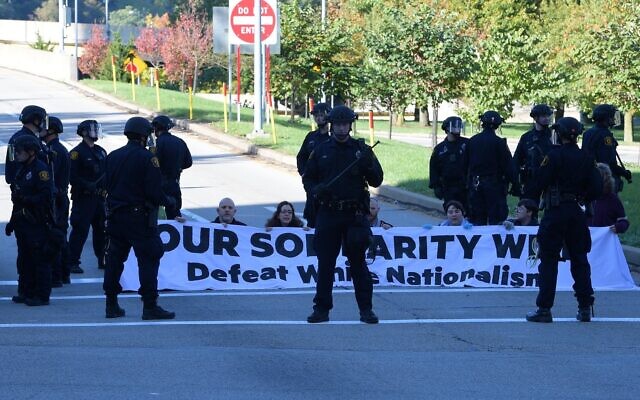 Members of Bend the Arc at a protest against white supremacy in 2019. Photo by Caiolinn Ertel.

On October 23, 2019, a group protesting Donald Trump’s incitement of white nationalism took to the streets of downtown Pittsburgh on the day of his visit.

On June 1, 2020, a group protesting the systemic violence of law enforcement against members of the black and brown community that led to the murders of George Floyd, Breonna Taylor, and Antwon Rose, among so many others, took to the streets of East Liberty.

Both groups were met by police in riot gear. But that’s where the similarities end.

We were two of the protestors against white nationalism. Enlisting the help of a protester on the ground in East Liberty, who requested anonymity, here’s a side-by-side comparison of what our two groups experienced:

Our group sat in the intersection of Liberty Avenue and Commonwealth Place, knowing that we were violating the law and would face arrest.

We, as protesters against police brutality, were marching peacefully on the streets of East Liberty, knowing we might face a harsh police response based on what had happened two days before at downtown protests.

We were told by police, before we even began our protest, that they would “make this go as easily as possible for us.”

We were greeted by the presence of snipers atop buildings right from the start. 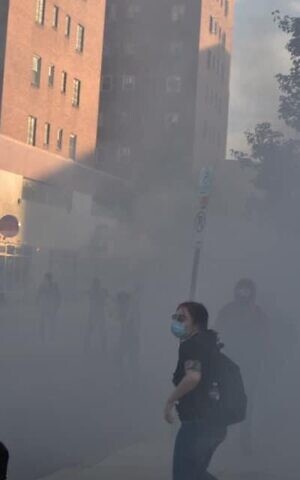 The protest against racism in East Liberty. Photo provided by Jonathan Mayo.

As we sat in the street, riot police assembled and quietly marched into formation in front of us. It seemed as though they were performing an exercise.

The riot police waited until the legal observers left to make any sort of move on us.

We were given three warnings that a failure to disperse would result in arrest. Meanwhile, one officer gave us hand warmers.

The young adults were marching and chanting “this is not a riot” when the first strike by the cops was made.

We were calmly surrounded by officers, asked to stand up, had our hands zip-tied behind our back, and one by one, walked to the police vans.

The police claim they dispersed folks using smoke; they did not. Even I got tear gassed from a block away, that’s how heavy they lit that street up.

Before we were arrested, we received well-spaced warnings, so we retained the choice to leave. After our arrests, officers repeatedly asked us if we were hurt, offering to take us for medical care if needed.

I told everyone to disperse the other way, or they were going to get gassed. But the way the cops assembled, they blocked off every exit one could have taken to get to their respective neighborhoods.

Equal under the law? Hardly. Give whatever excuse you want for this vast disparity in treatment toward peaceful protesters, but the facts are plain: Those of us who blocked traffic last October are white. Those who led the call for justice in East Liberty are black and brown.

It’s really that simple. We experienced it personally, and you’ve seen it with your own eyes. Remember the “re-open” protesters, who gathered at the seat of our local government a few weeks ago to intimidate our local lawmakers? Those protestors were heavily armed, but the police practically ignored them. Why? Because they were white.

Why is it that the Pittsburgh Police Department only deploys tear gas and uses rubber bullets during black-led protests? Used against American citizens. Paid for with our tax dollars.

“Stronger than Hate: Where are you now?” read a startling sign at a protest a week after the police tear gassed the East Liberty protestors. As Jewish Pittsburghers, we must accept and answer this charge.

We must start by naming that Black Lives Matter.

We must recognize and support this Black-led movement to end racism and racial violence. It is not the time nor place for us to insert ourselves at the front, but to flank the black and brown leaders on the frontlines of this fight for justice.

We must hold our city, county, and state officials accountable for how much their budgets contribute to the over-militarization of law enforcement with riot gear equipment, weapons, and tanks. Locally, we must support ordinances recently put forward by County Council members Liv Bennett and Bethany Hallam banning the use of tear gas, rubber bullets, and other militarized weapons by anyone in Allegheny County. At the state level, we must push for similar legislation, like the use of force bill submitted by state Representatives Summer Lee and Ed Gainey.

Many Pittsburghers, Jews and allies, adopted “Stronger than Hate” as a motto in the aftermath of the synagogue massacre. It was a lodestar for what we aspired toward in our grief and anger. If we are truly “Stronger Together,” then the sentiments that healed us must apply equally to all Pittsburghers. Recent events have shown us we have a long way to go before we’re there. PJC

Jonathan Mayo and Tammy Hepps are members of Bend the Arc: Pittsburgh.