The new Tree of Light building as seen from above with the Path of Light. Photo provided by West End Strategy.

For the first time since last year’s announcement that Studio Libeskind would be the lead architect for a reimagined Tree of Life building, community members saw design renderings and were giving the opportunity to ask questions about the project.

Myers opened the meeting, explaining “the why” of the project.

“The mission,” he said, “is to turn the evil of that day into something good. It’s not merely an obligation. That’s how we see ourselves at the Tree of Life — we have an obligation to build upon the horror of that day.”

The aspirations for the new building, he said, are to create something beautiful in the city that will be a point of pride and serve as a place to fight antisemitism and hate.

Bernstein, who, in addition to his work with Tree of Life is also on the steering committee for the Eradicate Hate Global Summit held in Pittsburgh earlier this week, said the mission of the new nonprofit is to inspire, engage and enable people to act against antisemitism.

“We’re going to do that first and foremost,” he said, “by ensuring the continuity of Jewish life on this site.”

To achieve that goal, he said, the core of the building will include a sanctuary and a place for Jewish worship. 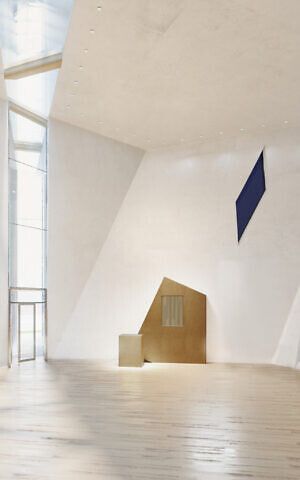 Rendering of the sanctuary at the newly designed Tree of Life building. Photo provided by West End Strategy.

Bernstein said the new Tree of Life organization, the memorial group representing the victims’ families and the three congregations, and the Holocaust Center of Pittsburgh all have an aligned vision of the project. He noted the new building will be a center for light and a place to fight the scourge of hate-fueled violence.

Sketches of the building, renderings of its footprint in the neighborhood and a floor plan were all presented by Swickerath and Rothschild.

The reimagined space will raze all but the original Tree of Life building that houses the Pervin Chapel.

Swickerath said that “bringing lightness to the dark” and “let there be light” were important themes for the building.
To that end, one of the main design elements is a “Path of Light.” 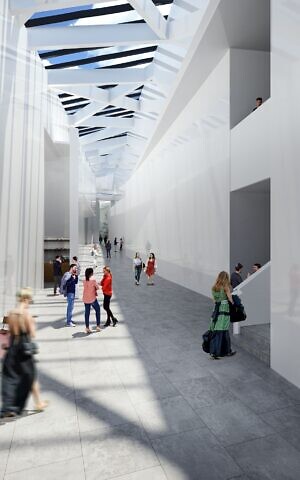 A rendering of the interior of the Path of Light. Photo provided by West End Strategy.

“We’ve created a single entry that will be at the opening of the path welcoming everyone to the building,” Swickerath said. The path will connect all of the various elements of the building, announcing itself on the front of the sanctuary and showing that the essence of the site has changed.

The original stained-glass windows will be included in the design, whose footprint is smaller than the current building: 41,000 square feet compared to 53,000 square feet.

Outside, a garden and memorial are planned, as are 36 parking spaces, the same number that existed at Tree of Life previously. Negotiations are taking place between Tree of Life and the Children’s Institute to secure the use of the Institute’s parking for heavily attended events on evenings and weekends.

The meeting generated one new piece of information when Rothschild, in response to a question, said that the Holocaust Center of Pittsburgh will not be housed in the new building; rather, its staff will be located at Chatham University on Murray Hill Avenue.

Shifting from the holy to the mundane, residents expressed concern about parking, street congestion and the size of the building.

Rothschild reiterated the smaller square footage and that the available parking at the new building and at the Children’s Institute “will take care of most of that burden.”

In response to a question about when the design was expected to be presented to the zoning board, Rothschild expressed hope that it would be before year’s end and that, per zoning board requirements, public notices would go out in advance of the meeting.

The expectation, Rothschild said, is that demolition will begin in the spring of 2023, meaning that construction could start shortly after.

“Boy, that’s going to be a day to celebrate,” he said.

A recording of the meeting will be available at the Squirrel Hill Urban Coalition’s website. PJC