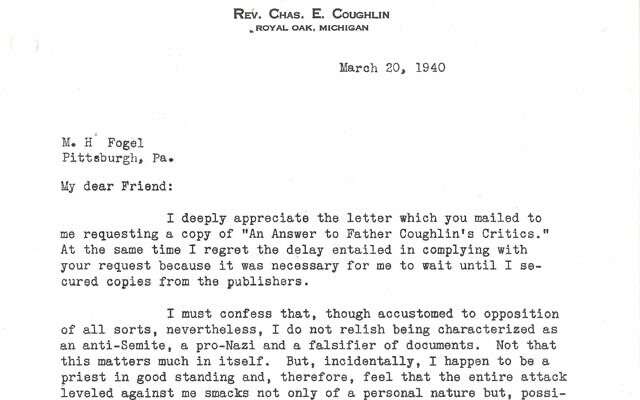 Meyer Fogel received a form reply from Rev. Charles E. Coughlin in 1940, about four years after criticizing the priest in a letter to the Pittsburgh Press. (Image provided by Rauh Jewish Archives)

“I must confess that, though accustomed to opposition of all sorts, nevertheless, I do not relish being characterized as an anti-Semite, a pro-Nazi and a falsifier of documents,” Coughlin insisted. “Not that this matters much in itself. But, incidentally, I happen to be a priest in good standing, and, therefore, feel that the entire attack leveled against me smacks not only of a personal nature but, possibly, of one against the Christian religion.”

Coughlin was a Catholic priest who became a leading media figure of the late 1920s and especially through the 1930s. He initially supported President Franklin D. Roosevelt, and then became one of his loudest opponents. With the turn against FDR came associated attacks on “New Dealers,” “communists” and “international bankers.”

If those words made you wince, know that they made Jewish readers wince then, too. The Jewish press waited for “bankers” to become “the Jews,” and Coughlin obliged.

Speaking in late August 1936, at a convention for the National Union for Social Justice, an organization he had founded to promote his political agenda, Coughlin told followers, “We are a Christian organization in that we believe in the principle of ‘love thy neighbor as thyself.’ With that principle I challenge every Jew in this nation to tell me that he does or does not believe in it. I am not asking the Jews of the United States to accept Christianity and all of its beliefs, but since their system of ‘a tooth for a tooth and an eye for an eye’ has failed, that they accept Christ’s principles of brotherhood.”

A few days later, Fogel received a handwritten note from a Catholic woman in Irwin, Pennsylvania, named Carolyn Marius. She praised his logic and courage. “It pleased me also to hear you condemn Mr. Coughlin’s politics; he has fooled many followers with his talk of ‘justice’ etc., but he cannot fool me. He is using the same tactics that put Der Fuhrer in power. Thank goodness that America is still imbued with the spirit of Paine, Lincoln and the founding fathers — and that a priest as Dictator will not easily be tolerated.”

Coughlin’s ugliness increased with time. He plagiarized Nazi writings, echoed the “Protocols of the Elders of Zion,” defended Kristallnacht, and blamed the Jews for inciting World War II. Some of his followers attacked Jews on the streets of New York.

He also practiced the art of taking cover. Speaking about a German American Bund rally in New York, he said, “Nothing can be gained by linking ourselves with any organization which is engaged in agitating racial animosities or propagating racial hatreds.” His self-protection campaign peaked in 1940 with the book “An Answer to Father Coughlin’s Critics.” Fogel sent for a copy, but he only got the signed form letter.

By denying the consequences of his speeches and articles, Coughlin helped to reinforce them. High winds can extinguish a small fire, but they will fan a large one.

With the advance of World War II, Coughlin’s influence waned. He was undone by quick shifts in public opinion and by the Roosevelt administration, which used many legal mechanisms to prevent him from disseminating his message. With a warning from the Catholic Church, he went quiet and was obscure for the final decades of his life.

Fogel kept the personal letter from Marius and the form letter from Coughlin. He added them to the scrapbooks he compiled throughout his coming of age: work with the local chapter of the Hapoel Hamizrachi, plans to start an Orthodox junior congregation, his religious school lesson plans, letters to the editor, and all the documents of a youth spent in communal service during a time when threats to his people had never felt graver. PJC