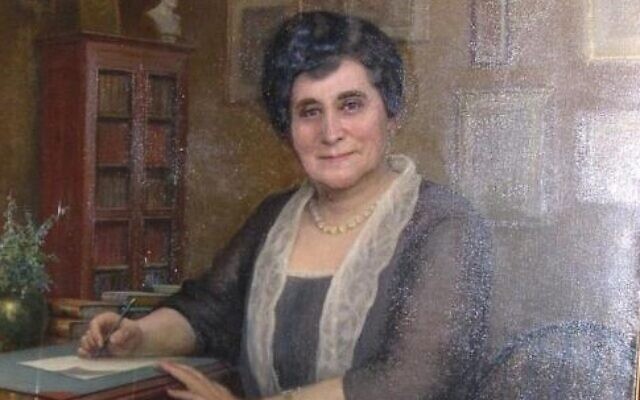 Bertha Rauh had known Martin Leisser for more than 50 years by the time he painted her portrait in 1926. (Image courtesy Rauh Jewish Archives)

The Historical Society of Western Pennsylvania published a wonderful article in 1935 called “Pittsburgh Seventies.” It’s a genre of writing common in the back catalog of our long-running publication: a reminiscence of old Pittsburgh. What makes this article so much better than the usual account of long-forgotten people and place names is its analysis. The author, J. Ernest Wright, deftly identifies the spirit of the city in the 1870s.

Wright notes the soot and grime, of course, but he is able to see beyond it: “A growing, sprawling, awkward, provincial, but pleasant city was Pittsburgh in the seventh decade of the nineteenth century. Active, adolescent, eager as always, confident, too, as always.”

The 1870s followed the hardscrabble frontier-taming flurry of the middle decades of the 19th century and preceded the bloated wealth of the Gilded Age. “It was a decade of widespread physical comforts, of buoyant optimism, an age of correctness and politeness, genteel in behavior and thinking,” Wright explained. “It was an age of social aspiration. People wanted wealth, leisure, and power. And in Pittsburgh they were fast getting it.”

Within that setting, an artistic community finally blossomed in Pittsburgh, after decades of disconnected individual efforts. One of the most important cultural organizations launched during those years was the Art Society, founded in 1873. It arranged some of the first local exhibitions of paintings in Pittsburgh, and it also organized concerts.

A leading figure in the Art Society was Martin B. Leisser (1845-1940), who painted this portrait of Bertha Rauh in 1926. Leisser was the son of non-Jewish German immigrants to the South Side. There were few art classes in Pittsburgh in the 1850s and 1860s, let alone art schools, and so Leisser initially trained in the studios of the few professional artists who were working in the city, most notably the landscape painter George Hetzel.

Leisser traveled throughout Europe, attending the great art academies. He returned to Pittsburgh to teach a beloved life drawing class at the Pittsburgh School for Design.

For a time, his studio was in the same building as Andrew Carnegie’s office. The two men met in an elevator and became friends. Unexpected friendships often yield unexpected benefits. Leisser is credited with convincing the industrialist to include an art school into his plans for the technical college that is now Carnegie Mellon University.

At the time that Leisser painted this portrait of Bertha Rauh, she was 61 years old and approaching her professional peak. She had served 20 years as the president of the local section of the National Council of Jewish Women and had recently become the head of the Department of Public Welfare, where she was revolutionizing social services locally.

This portrait initially struck me as being technically accomplished but a bit bland, perhaps a vanity project. It shows Mrs. Rauh in a well-appointed room, looking up from a letter. We have dozens of those letters at the archives. She sent them to colleagues all over the city in her efforts to create partnerships, launch initiatives, and solve problems.

But once I learned about the connection between artist and subject, I saw this painting through Leisser’s eyes. He captures something of Bertha’s personality—her refinement, determination and approachable warmth. He had known her since her childhood. It was an acquaintanceship of more than 50 years, and it transcended their differences in age, gender and faith. The painting is a testament to a small community of like-minded souls.

This is probably what Wright was referring to when he said that Leisser and his local contemporaries were “not great names, to be sure, but native and sincere and productive of a genuine culture which came not from the outside nor from a pretentious surface, but from the temper of the people, and which gave to the city life of the seventies a light and color and sheen that glowed steadily through the film of industrial soot and scum.” PJC

Eric Lidji is the director of the Rauh Jewish History Program & Archives at the Heinz History Center. He can be reached at eslidji@heinzhistorycenter.org or 412-454-6406.