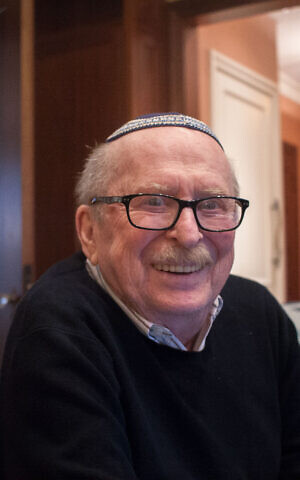 GOLIN: Sanford Golin, 92, sailor, scholar and beloved family patriarch, died on Sept. 22 in Chapel Hill, North Carolina, after a brief stay in hospice.
He was a long-time Mt. Lebanon resident, who had retired to Florida and then moved to North Carolina.
Better known by his nicknames Uncle Sonny, Grandpa Joe, Dad and just plain “Joe,” Sanford was a warm, funny guy with a passion for travel and a wide-ranging interest in human nature. He trained as a psychologist and was known to respond to questions from his children and grandchildren with his own question: What do you think? It was a sincere inquiry — he really did want to know. He was also an avid fan of chocolate ice cream, college basketball, the Pittsburgh Steelers and the Boston Red Sox. But his first love was family.
He was born on July 24, 1929, in Providence, Rhode Island, to Nathan Golin and Sophie (Lecht) Golin. He spent his early years at the center of a large extended family of immigrants and first-generation Americans. Sonny, as he was known then, lived in a multi-family dwelling with his sister Evelyn, his parents, grandparents, many aunts and uncles. The Bubbe and the Zayde, his maternal grandparents, were the heart of this Jewish household. The youngest of the family, Sonny was the darling of his aunts and grandmother. When they wanted him to drink his milk, they would prepare homemade fudge for him as encouragement. He never did lose his sweet tooth, and later in life, his favorite fudge shop was the Candy Manor in Chatham, Massachusetts, where he vacationed for more than 50 years.
Sonny was smart and athletic, earning a spot at Classical High School in Providence, where he also was captain of the basketball team. After high school, he enrolled at Brown University, where he had won a scholarship. He graduated from Brown with a B.A. in psychology in 1951. After college, he volunteered for the Army, and he took the nickname Joe, which stuck with him the rest of his life.
Growing up in an immigrant household, he rejected many of the “Old World” ideas brought by his relatives from the Ukrainian town of Machelik. He believed scientific investigation offered a better path to explaining the world. He earned a Ph.D. in psychology from the University of Iowa and became a professor at the University of Pittsburgh, where he published research on depression and trained generations of young psychologists over a 30-year career.
While in graduate school, he met Anne Keefe and they married in 1957, raising their three children, Carol, Eric and Sarah, in Pittsburgh. The young family spent summers at Cape Cod, a destination that held a special place in his heart, and also spent much time sailing in the Chesapeake Bay on their sloop, The Kathy.
He divorced, and in 1987, he married Jane Berkey, of Pittsburgh. They spent many years in their cherished city, taking vacations with their combined families of five children and 11 grandchildren. Joe had also been close with his son-in-law, Andy Kaplan, Carol’s husband, who died suddenly at the age of 47. Joe and Jane enjoyed traveling extensively together and sailed regularly in the Chesapeake Bay and the Caribbean with a close group of friends.
They retired to West Palm Beach, Florida, and at the age of 80, Joe took the psychologist’s licensing exam in Florida, partly just to see if he could do it. He spent a lot of time studying his index cards and passed the exam. Being fully licensed, he took a job as a consultant in an office in Miami, where he worked two days a week up until age 87.
During the pandemic, he moved in with Carol at her home in Chapel Hill and was able to wait out the quarantine with Carol and her dog, Furby, by his side.
Last month, Joe was at a family reunion in Kure Beach, North Carolina, with his children and many of his grandchildren. It was the first time they had been together since the pandemic, and at dinner, he made a short speech, saying: “I recently had a 92 nd birthday. And I just want to say I am so glad you all are here, and I am here to celebrate, for nothing means more than family.”
Joe is survived by his wife, Jane Berkey, of Delray Beach, Florida; his children, Dr. Carol Golin, of Chapel Hill, North Carolina, Dr. Eric (Marion) Golin, of Newton, Massachusetts, and Sarah (Dan Gerger) Golin, of Maplewood, New Jersey; his stepchildren, Sue (Doug) Sesserman of Denver, Colorado, Paul (Lisa) Berkey, of West Bloomfield, Michigan; his grandchildren, James Golin, Anna Golin, Daniel Kaplan, Emily Kaplan, Jeffrey Gerger, Tommy Gerger and Vanessa Gerger; his step-grandchildren, Georgeta Sesserman, Mariana Sesserman, Sarah Berkey (Moshe) Lencer, Jack Berkey; his sister, Evelyn Baron, of Detroit, Michigan; and his nephews, Jeffrey, Tony and Dan Baron and their wives and children.
Charitable contributions in his memory can be made to a charity of one’s choice. PJC