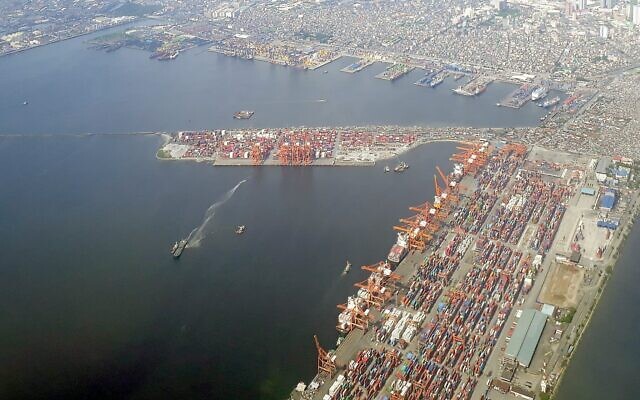 Aerial view of the Port of Manila (© Mosbatho via Wikimedia Commons)

Philippine National Police said Tuesday they had uncovered a Hamas cell that planned to target Israelis in the country, with a top foreign operations member of the terror group aiming to recruit locals to carry out the attacks.

A report from Police Brigadier General Neil Alinsangan of PNP intelligence said the plot was discovered based on information obtained from a Palestinian group’s local contact in the Philippines.

A police statement about the intelligence file, reported by local media, did not say if any arrests were made in the case.

“Our Filipino source identified the Hamas operative as ‘Bashir’ who was reportedly attempting to establish a foothold in the Philippines with pledges of financial support to some local threat groups including militant extremists with links to the international terrorist organizations,” Alinsangan said in the statement.

Alinsangan said there is an Interpol red notice on Shikli, who has been charged with an offense of “terrorism logistic support.” Red notices are issued for fugitives who are wanted for prosecution or to serve a sentence.

The Philippine source made several trips to Malaysia in 2016-2018 where he was in contact with Shikli to discuss attacks against Israelis in the Philippines, the PNP said.

In 2016 Shikli began “grooming” the source to be a local contact and gave him bomb-making training. The following year the two discussed recruiting Filipinos with ties to local militant groups “that will be utilized to kill Jews present in the country, conduct rallies at selected embassies and spread video propaganda in exchange of financial support,” the PNP said.
Advertisement

The statement apparently did not offer any further details but the PNP noted that in 2018 a chemist affiliated with Hamas and described as having a “knowledge of explosives” was arrested in Pampanga and deported to Turkey.

“This is a stern warning to all terroristic groups who plan to conduct recruitment and similar activities in the country, we have a way to know you and you cannot do your plans here,” Alinsangan said. PJC