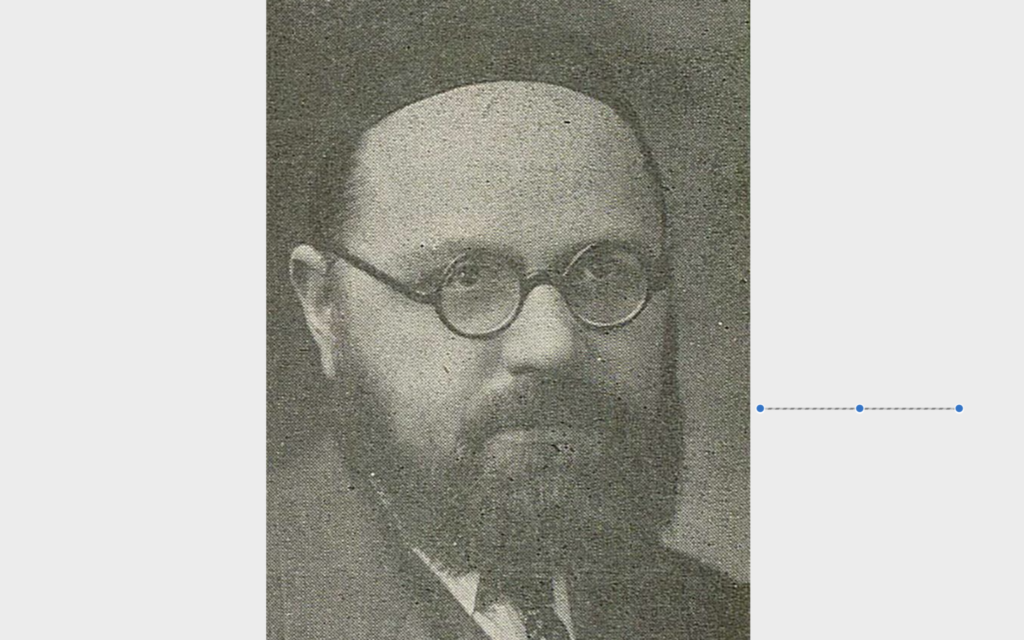 Rabbi Zev Wolf Leiter was one of the leading rabbis of Pittsburgh for decades, and yet few people today remember the details of his intellectual life. (Image provided by Rauh Jewish Archives)

Here are two sermon titles from Rabbi Zev Wolf Leiter, who led Congregation Machsikei Hadas for 50 years and created the Maimonides Institute: “The Significance of Elul in Wartime” (Aug. 8, 1942) and “Abraham and War” (March 25, 1944).

The scriptural references of Rabbi Leiter’s sermons are easy to guess. The former certainly dealt with the laws of war detailed in Deuteronomy, while the latter likely concerned the war between the kings in Genesis. But what Rabbi Leiter did with those verses is unknown. To my knowledge, he never collected his sermons in printed form.

Rabbi Leiter knew the results of war firsthand. He was a prodigy with a long rabbinic lineage who came to the United States in the early 1920s, following the upheavals in European Jewry during World War I. Upon his arrival here in 1923, the Criterion reported, “During the war Rabbi Leiter was very active in bringing relief to the suffering men and women of Austria and Poland. Immediately after the cessation of arms he was appointed by the Jewish communities of Holland to visit the war-stricken countries and bring over the poor and under-fed children of Austria to Holland; he was also organizer of the Society for the Support of Stricken Rabbis and Scholars in Europe.”

This and many other biographical sketches of Rabbi Leiter tend to focus on his accomplishments. He spoke 12 languages. He was an expert on the Jewish laws of divorce. His works were cited hundreds of times. He was one of the few scholars to have his commentaries included in a printed version of the Talmud. He advocated for a kosher kitchen at Montefiore Hospital. He commanded the respect of Dr. Solomon Freehof at Rodef Shalom and Rabbi Herman Hailperin at Tree of Life. He was generous and devout.

None of those articles, though, reckons with his scholarship. A writer who only knows English can only present the surfaces of a career written in Hebrew. To study how biography informs scholarship, you need to review works in their original language.

Such language barriers leave many stories untold. The thousands of pages of local Jewish archival material written in languages other than English are rarely investigated and rarely cited, and therefore the story of our community has been largely limited to the perspective of English speakers. Along the way, a lot of different types of Jews are overlooked. There are the secular socialist Jews who wrote in Yiddish, the Orthodox scholars who wrote in Hebrew, the early reformers who wrote in German, and of course the many life stories that contain snippets of Russian, Polish, Hungarian or Arabic.

Anytime those sources are used, even in little drips, it reveals new worlds to explore. In her new book “Defenders of the Faith: Studies in Nineteenth- and Twentieth-Century Orthodoxy and Reform,” Dr. Judith Bleich of Touro College cites a responsa from Rabbi Leiter’s 1932 collection “She’elot u-Teshuvot Bet David, Volume I.” While analyzing the religious challenges of Jewish military service, Rabbi Leiter wrote: “The obligation devolves upon every God-fearing individual (haredi) to labor on behalf of better world peace in order that innocent blood not be spilled… and that warfare cease.”

In a review of the book in a recent issue of Jewish Action, Rabbi Dr. Moshe Y. Miller paraphrased the translation and made its assertion even bolder: “[C]oncerned about the loss of life that war inevitably entails,” Rabbi Leiter “called upon every God-fearing Jew to engage in activism to bring about world peace and the cessation of all warfare.”

A single sentence, in two translations, provides much richer insights into the specific texture of Rabbi Leiter’s mind and heart than the articles based on his CV. It also makes you wonder what greater treasures might await a deeper dive into these sources. PJC