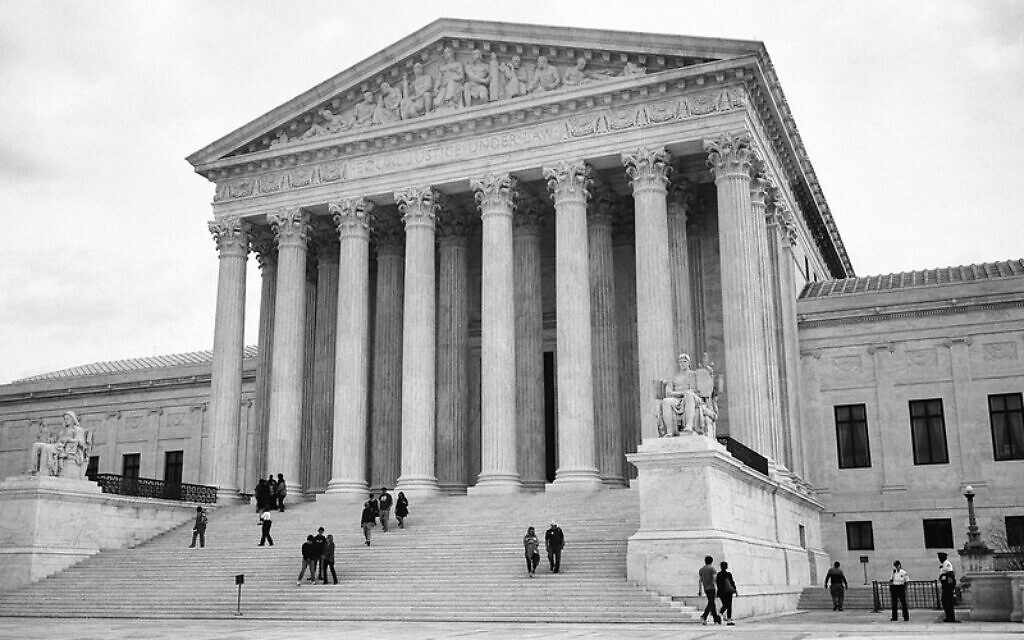 It is tragically fitting that another gun massacre took place in the United States on Independence Day, as the nation marked the 246th anniversary of its founding.

This happened days after the country’s Supreme Court made such massacres more likely by further easing what is the developed world’s most lax gun environment, voting to permit open carry of weapons by basically anyone in one of several rulings.

It happened as part of a June flurry of big decisions. One of them ended 50 years of abortion rights for women in America, sending shock waves through the body politic, and will probably cause women all kinds of grievous harm. Another, making it more difficult for the federal government to regulate emissions, reduces our chances of saving the planet from catastrophic warming.

All these decisions are unpopular among the public. That is something the justices confront with haughtily stoic indifference, which would be somehow laudable if these were tremendously thoughtful sages resisting vulgar popular whims.

But they’re not. The U.S. Supreme Court has a majority of conservative activists, and their recent rulings are political decisions masquerading as jurisprudence.

It is worth taking a moment to consider the gun ruling, which is the absurdest of them all. It is based on insistence that the Second Amendment to the U.S. Constitution, which speaks of arming a “well-regulated militia,” qualifies close to everyone to buy and carry weapons — even assault rifles. The gun cult opposes even basic background checks that might filter out would-be mass murderers. One of them, as said, just killed at least a half dozen people in Illinois.

The abortion ruling violated express promises by several of the justices to view Roe v. Wade, the 1972 ruling that banned abortion bans, as established precedent. Those promises were made at their Senate hearings before their confirmation, which would be a form of perjury.

So it should come as no surprise that a minority of Americans profess faith in the Supreme Court — a historic low of 25% in a recent Gallup poll.

How could it have come to this? The problem originates with the U.S. Constitution — which was written by a bunch of men (many of whom owned slaves) who had never seen a dishwasher and yet are lionized as “framers” whose every thought and intention must be respected centuries later with fanatical devotion.

The Constitution, of course, was one of the first such documents (by some definitions the first), and it has achieved many excellent results over the years. But it contained one grievous error which was at the root of the problem today.

That occurred in Article One, which established the Senate as the upper house of parliament and ordained that each state should be represented by two members.

At the time, the United States had just over a dozen such states, and most were of roughly similar size. It seemed reasonable, in the early years of the country, when the idea of a federal government was new, to give a nod to the states, and treat the whole thing as a confederation.

The result of this today — when there are 50 states with wildly varying population sizes, is an absurdity. A state like Wyoming has almost 70 times fewer people than California, meaning each voter there has 70 times more power in the Senate.

This is the case all across the country with rural states that have small populations that tend to be conservative and traditional.

This basically means that about a quarter to a third of the people can create a majority in the Senate.

And the Senate is no mere chamber, nothing like a quaint House of Lords: it is the body without which not much can happen in America. It can remove the president from power, it can hold up all important legislation, it confirms most important federal appointments and, as we have seen, it similarly in effect appoints the Supreme Court justices.

Changing the way the Senate works would require an amendment to the Constitution. But the bar for amendments is impossibly high — generally requiring ratification by three-quarters of the legislatures of the states (of which half are reliably Republican). The states could not even get it together to pass an Equal Rights Amendment for women (back when what was being asked for was equality and not equity).

In short, the system enables a minority of the people who hold radical conservative positions to impose them on the rest of the country, because of the non-majoritarian aspect of the Senate.

Proponents of all this are exploiting what is a genuine cult of the Constitution in the United States, which in most countries would not be a terrible thing. But they also are insisting on something that is no longer really the case: that the United States is not exactly a country but a collection of states that have their own character and should have the final say on many matters.

They should be careful what they wish for. Some states may be tempted to secede, which is neither allowed for nor barred explicitly by the Constitution.

It seems glib to even mention the possibility today, but imagine the Supreme Court and the Senate dragging the United States a few steps closer to Gilead, the religious dystopia from “A Handmaid’s Tale.” How long will states like California, Illinois, New York and Massachusetts put up with the lunacy? Secession might start looking like the most viable way to avoid violence. In a theoretical split, Blue America would take most of the economy, innovation and globally impactful culture with it.

This is all a terrible tragedy. The United States is not just indeed a country, it remains the world’s indispensable country — not its 50 most indispensable districts. It has the world’s reserve currency, a huge disproportion of its innovation, the strongest military and a role as the planetary good cop should it wish to step up.

The only way to do that is not to despair on Fourth of July, and to vote on the eighth of November. PJC

Dan Perry is the former Cairo-based Middle East editor and London-based Europe/Africa editor of the Associated Press, served as chairman of the Foreign Press Association in Jerusalem and authored two books about Israel. This first appeared on The Times of Israel.