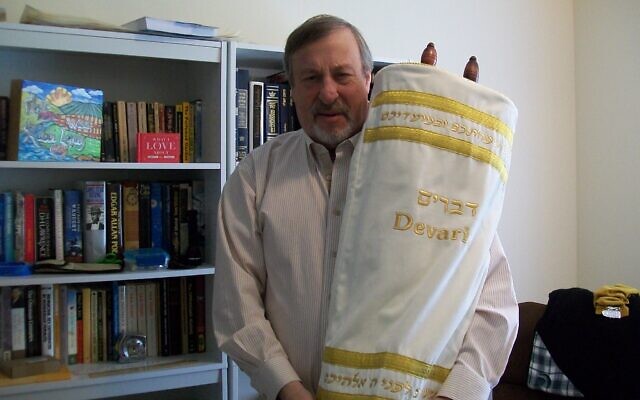 When Rabbi Lenny Sarko lost some of his vision, there was something else he began to see.

About five or six years ago, Sarko, a man with a friendly demeanor who serves as the spiritual leader of Congregation Emanu-El Israel in Greensburg, experienced bleeding in his eyes due to Type II diabetes. The world became a little dimmer — not a good situation for a man so heavily reliant on reading holy texts. He wondered how others managed.
“I was afraid if I ever got that again, I’d be out of a job, so I learned Braille,” Sarko told the Chronicle. “I thought, ‘If there’s Hebrew Braille, there’s got to be a Hebrew Braille Torah’ — but it doesn’t exist.”

So, Sarko created one.

Sarko’s Hebrew Braille Sefer Torah might be the first of its kind in existence. One contemporary parallel came in 2019, when 12-year-old Batya Sperling-Milner became a bat mitzvah in her modern Orthodox community by reading a paper, in Braille, about blind Jews and their relationship to the Torah. The story caught the eye of the Washington Post.

Sarko, in turn, has become a champion for blind and visually impaired Jews, who he estimates number more than 300,000 in the United States alone.

“It doesn’t matter the denomination, blind people are supposed to be full members of the Jewish community,” Sarko said. “That means those who are blind or visually impaired can read from the Torah, right? No. Can they [read the Torah at their] bar mitzvah? No.”

Most customs for creating a Sefer Torah date to the eighth century and come from the text of “Masechet Soferim,” according to the Devarim Institute, an educational nonprofit that Sarko now helps lead. But in the eighth century, Braille did not exist.

“Judaism has always adapted the application of its precepts based on context,” Sarko wrote on the Devarim Institute website. “Today we have the ability to create a Braille sefer scroll and thereby include this segment of Jews in a congregational Torah reading …. The creation of Braille Sefer Torahs will potentially affect hundreds of thousands of Jews nationwide and potentially worldwide.”

Sarko’s Braille Torah scroll is embossed in Hebrew Braille, which was created around the 1950s. 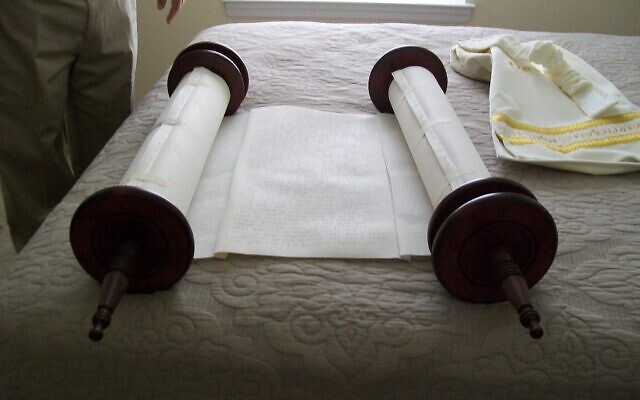 “This is not transliteration,” Sarko stressed. “It’s just being felt instead of read.”

That’s an important distinction, because the Torah is supposed to be read in real time and not recited from memory, Sarko said.

Sarko hopes to make his Braille Torah scroll — and others based on the same slate-and-stylus Braille embossing — widely available by shipping it to congregations when blind or visually impaired Jews have lifecycle ceremonies or want to read from the bima. After the service, they would ship the Torah back to Sarko, who would pass the scroll to another congregation.

“This is an amazing achievement that he’s done here,” said Ed Haines, chief program officer for Hadley, a nonprofit in suburban Chicago that provides support to the visually impaired.

Founded in 1920 by William Hadley, an educator who lost his eyesight later in life, Hadley offers practical help, connection and support free of charge to anyone with a visual impairment, their families and professionals supporting them. Since July 2020, more than 10,000 learners have accessed 50,000 workshops through Hadley, which provides online, large-print, Braille and audio media, reaching all 50 states and 100 countries.

“There are 7 million blind or visually impaired adults in the U.S. — there’s got to be someone in a congregation who wants to stand up and read the Torah, like anyone else,” Haines said. “The fact that [Sarko’s] done this, it’s just fantastic.”

There is, of course, a science to the text — and the task of following through on the work is no small thing. A Braille “cell” consists of six dots of 2 millimeters in diameter, cast in two columns of three, with each mark set 1 millimeter apart, Sarko said. There are about 4,000 marks in each column in Sarko’s Torah — and there are 239 columns in the scroll, which took Sarko more than three years to finance and create using machine-punched slates. 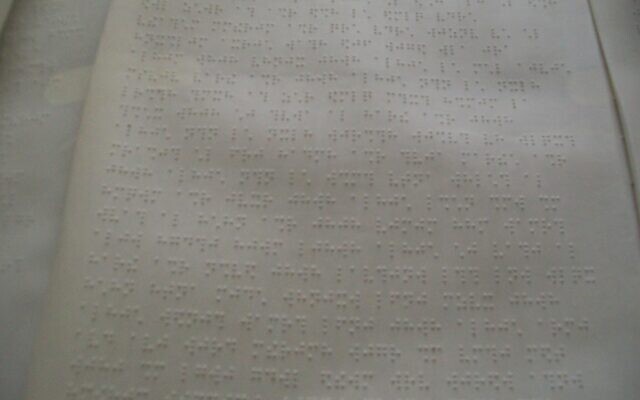 The scroll does have limitations. Though the Braille marks on the scroll do not flatten when the scroll is rolled up or touched, Sarko said it is not kosher because a scribe didn’t “write” it and because Jews have to touch it — without a yad — to read from it.

That’s one limitation for blind individuals like Betty Kane and Judy Meyers, two sisters from Squirrel Hill who are Orthodox Jews.

“We would never read it from the bima,” Meyers told the Chronicle, citing Orthodox prohibitions against women reading from the Torah in public. “It might be interesting to see what it looks like. That’s a nice thing he’s done, nevertheless.”

“I’ve been trying to keep it low-key up til now,” Sarko said. “They all say the same thing: ‘When can I get the scroll?’”