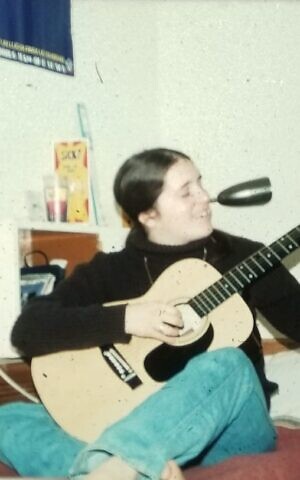 HOZE: Lisa Sara Levenson Hoze — Zichrona L’Vracha — May her memory be for a blessing.
Lisa Sara Levenson Hoze, wife, mother, grandmother, daughter sister, aunt, friend and mentor/madricha to many, passed away on July 11 in Netanya, Israel after a long illness.
The daughter of Pittsburghers Naomi Schwartz Levenson (z”l) and Fred Harvey Levenson (z”l) and sister of Dan Levenson, Lisa was an active member in Pittsburgh Young Judaea, danced in the Rishona Israeli dance troupe, and attended Camp Tel Yehudah. She held regional and national positions and served on the executive boards of both. Lisa graduated from Taylor Allderdice High School, where she played a leading role in “Gypsy” during her senior year. After graduation, Lisa participated in the Young Judaea Year Course in Israel. She had an exceptional experience, which culminated in her decision to make aliyah and build her life in Israel.
As a young immigrant Lisa joined the Israeli Defense Forces. Her exceptional musical abilities and ever-engaging personality were immediately recognized and she was assigned to the special IDF unit responsible for entertainment and cultural performances throughout the country and abroad. Lisa later became a physical therapist, earning her degree from Ben Gurion University and focusing her practice to work with rehabilitation.
Lisa met her husband, Asher Hoze, in Israel and they raised two sons, Itamar and Yoav, in an observant home that blended the heritage of Asher’s Yemenite background with the Ashkenazi traditions in which Lisa was raised. Lisa was a dear and valuable member in their religious community where she was known for her warmth, humor, and ever-positive outlook on life.
Lisa is survived by her husband Asher, sons Itamar Hoze (Liza Roumani) and Yoav Hoze, two grandchildren Maor and Matan Hoze, brother Dan Levenson and nephews Jonathan and Joshua.
The announcement of Lisa’s death brought an outpouring of messages from many old friends throughout the U.S. as well as Israel whose lives had been touched by Lisa’s generosity, compassion and laughter. The family address is: HaRav Moshe Levin Street 12 Aleph, Netanya, Israel. PJC