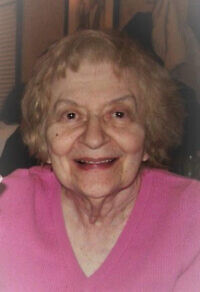 BAYER: Helen (Halina) Bayer, Holocaust survivor. Adored wife of the late James Bayer, Helen died peacefully and painlessly on Nov. 11, 2020, at Weinberg Village, her home for the past three years. Helen was born in Łodz, Poland on May 25, 1925, to Menachem and Rosalia Cymerman (Graff) and had one sister, the late Mary (Maryle) Gale. Her happy childhood ended with the onset of WWII. She survived typhus in the Warsaw Ghetto before her father was able to arrange the family’s escape just before the ghetto uprising in 1943. They were hidden in the apartment of Krystyna Panek, a Christian who risked her life to hide a Jewish family. In August 1944, in retribution for the shooting of a German officer, all men on their street in Warsaw were executed, including Helen’s father. The women were rounded up and taken first to Ravensbrück Concentration camp and then to Buchenwald. Miraculously, Helen, her sister and mother all survived life in the camp and a three-week forced march into Czechoslovakia at the end of the war. Their transition between war and peacetime was spent in a displaced persons camp in Aschaffenburg, where Helen met and married U.S. intelligence officer James Bayer. They moved to Jim’s hometown of Pittsburgh after the war, where they lived a quiet but happy life. Jim worshipped the ground Helen walked on, and they were a loving and devoted couple. Helen was a favorite aunt to her sister’s children, Gershom, Arthur, Christine and Anita, who remember her with great fondness and affection. Visits from Pittsburgh were always looked forward to with much anticipation, and Helen’s mother (who lived with Mary’s family in Canada) would go into a cooking frenzy for weeks before their arrival. Helen took great pride and interest in whatever her nieces and nephews were doing, and in later years, their children, and was always supportive and encouraging. Helen spent her working life as office manager for Lifetime Stainless Steel products, working long past normal retirement age. After retirement she took up hospital volunteering, which she continued well into her 90s. She collected dolls and enjoyed chocolate and shopping. She took pride in her appearance and was a real fashionista with a penchant for jewelry and stylish clothes. She loved her dogs, and they had a heaven-on-earth existence with her and Jim. Our thanks to Weinberg Village for making Helen feel so welcome and at home in her time there. Thanks also to private caregivers Heidi Schloer and Jennifer Seiss. We are forever grateful that Jenn was with Helen 24/7 in her final days. Helen was also very fortunate to make the chance acquaintance of Jon Prince shortly after her move to Weinberg. Visits from Jon, his wife Jennifer Poller, boys Jordan and Julius, and not least of all, Ginger, their dog, brought much joy to Helen in her last years. In Jon’s words, “Helen was a remarkable woman who beat the very worst odds, endured enormous challenges and survived.” Services and interment were held at the Adath Jeshuran Cemetery, Pittsburgh. If desired, memorial donations can be made to the Holocaust Center of Pittsburgh, https://hcofpgh.org/in. Arrangements entrusted to Ralph Schugar Chapel, Inc., family owned and operated. www.schugar.com PJC