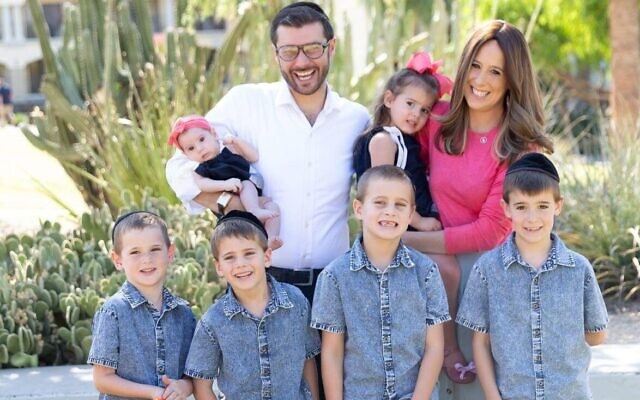 When Rabbi Ariel Shoshan and his wife, Ayala, moved to Phoenix from Baltimore in July 2002, he can only recall a handful of kosher restaurants, four daily minyanim and one K-8 school.

“It is not really possible to put words to the explosive growth of Torah Judaism in the Phoenix area (since),” he said.

The growth mirrors that of the Phoenix metro area overall.

According to the U.S. Census Bureau, Arizona has experienced the third-highest population growth nationally since 2010, and Phoenix is currently the nation’s fastest growing city.

Growth in the Orthodox community has meant that there are now at least 15 daily morning minyanim, many kosher food options and several Jewish schools.

“I think the number of children receiving a Torah education is at least seven times the size it was in 2002,” Shoshan said. “The most amazing element of the growth is the hundreds of families and individuals who have bravely accepted upon themselves the joy and responsibility of an observant life.”

According to the Pew Research Center, 17% of Jews ages 18 to 29 nationally self-identify as Orthodox, while 11% identify as haredi Orthodox, compared with 3%, and 1%, of Jews 65 and older, respectively.

Robin Meyerson, Jeremy Rovinsky and Yisroel Loeb are among thousands of others who have contributed to the growth of the local Orthodox community over the past decade or so by becoming observant, by relocating or both.

Meyerson grew up knowing she was Jewish, but nothing more.

“My mom and dad wanted to show me and my brother the world,” she said. “We traveled to Australia, Malaysia and England and I learned about other cultures, like Buddhism, Hinduism, Islam and Christianity.” But not Judaism.

She didn’t know what it was, but she was always searching for something. Looking back, she believes it was the pintele yid: a spark of Jewishness within every Jew, observant or not.

When she was 11 and living in the United States for a year, she asked her parents to find a synagogue. For one year she went to Sunday school at a small temple in Paducah, Kentucky.

In high school, she played Auguste van Pels in the school play, “The Diary of Anne Frank.”

“And that’s it. That was the extent of my Jewish knowledge,” she said.

Meyerson, who lives in Scottsdale, met her husband when she was 19 studying business at Arizona State University. Coincidentally, he also did not know much about Judaism. After the couple married and had their first child, they began exploring Judaism together.

They began at Temple Chai, a Reform synagogue, then went to Congregation Har Zion, a Conservative synagogue, and ultimately landed at Ahavas Torah, which they helped found. That path mirrored her own practice — she started by adding a mezuzah to her home, then keeping kosher and then observing Shabbat.

“It was a journey, it was not overnight,” she said. Through a free telephone service called Partners in Torah, she learned from a woman in New York over the course of eight years.

“We became really good friends and I met her in person a few times. She taught me almost everything I know,” she said.

Meyerson said becoming Orthodox has been the greatest decision of her life.

“I felt blessed that I found this secret society,” she said.

Rovinsky grew up Reform on Long Island, New York. It wasn’t until he was a preteen that he was introduced to Orthodoxy. And in college, while he studied philosophy and political science at American University in Washington, D.C. in preparation for law school, he learned as much about Judaism as he could.

“I always had questions,” he said. “Some things didn’t make sense to me.”

He became active in Hillel and participated in a program by the Avi Chai Foundation, which exposed him to “the whole spectrum of Jewish ideas.” The program took him to Israel, where he realized he wanted to study abroad. During his second semester of his junior year in 2006, he did.

While in Israel he spent time in different synagogues. “I was looking until something clicked,” he said. That click came when he met Rabbi Beryl Gershenfeld.

“He really spoke to me. He is the most self-actualized person I’ve ever met. When I met him I was in awe. I was like, ‘Wow. Whatever this guy has is what I want.’”

After Rovinsky graduated from American University, he decided to learn from Gershenfeld and applied to Machon Shlomo yeshiva, where Gershenfeld teaches and is dean.

He had already been accepted to George Washington University for law school, but deferred a year to attend yeshiva.

Rovinsky knew the path he was headed down once he made the commitment to go to yeshiva, and he’s grateful he made the choices he did.

Rovinsky, his wife and their young sons came to Arizona in 2013, when he had the opportunity to take a judicial clerkship.

Yisroel Loeb grew up in Far Rockaway, a neighborhood in Queens, New York. He was always aware that being Orthodox is a choice. His parents became religious independently before they got married event though nobody else in their families did.

“I was close with my extended family and none of them are Orthodox Jews or even totally Jewish,” he said. “Nobody else in my family married a Jew.”

He appreciates that about his upbringing, because it allows him to be in “many different worlds” and helps him as a clinical psychologist.

Now as a parent to an 11-year-old daughter and a 14-year-old son, he also wants his kids to know that being Orthodox is a choice.

“I would like them to choose the lifestyle that I have chosen so I can eat in their kitchen,” he joked.

He and his family moved to Phoenix from New York in 2015 for his residency in clinical psychology. People generally move to the Southwest to start over, and to reinvent themselves, he said.

“And that is no different for the Orthodox community,” he said.

Loeb feels the local Orthodox community is warm and welcoming, and not insular.

He noted the local community is one that allows people to explore their own Jewish identity on their own terms.

“Phoenix is a live-and-let-live type of place, more than the East coast.”

In their years in the Phoenix area, Meyerson, Rovinsky, and Loeb have watched the community grow firsthand.

Meyerson recalls when there was only one mikvah. “Now there are three and a few more being built,” she said. “We used to be one of a few families walking to synagogue on Saturdays in Scottsdale, but now the streets are growing so much we have a dedicated traffic light to help the Orthodox Scottsdale community.”

“In one year, it’s like seven years worth of change,” Rovinsky said.

He has helped to represent Phoenix at the Orthodox Union’s annual community fair, geared to people living in the New York area to learn about different Orthodox communities around the country.

But Phoenix hasn’t been represented for several years.

He gets calls all the time from people interested in relocating to Phoenix. He attributes the interest to Phoenix’s cost of living and Jewish schools.

“The schools here are top quality schools if you are looking for an Orthodox school,” he said. “And Arizona is the best for tuition assistance, so it’s very affordable as well.”

Rovinsky and Loeb agree that one of the things that makes the city’s Orthodox community special is that there are still many ways to make a difference.

“The community has infrastructure, but it’s not built up the way that bigger Orthodox communities are,” Rovinsky said. In 2019, he helped to launch the Orthodox Union’s Semichas Chaver Program in Phoenix, for example. The program teaches practical lessons in Jewish law and ethics in six-month intervals.

Shoshan moved to Arizona to become director of the Phoenix Community Kollel.

The founding rabbi of Ahavas Torah in 2004, Shoshan said the community had a strong foundation created by the rabbis and community leaders before him.

“Today, there is a sense of togetherness and mission in an environment of religious sincerity and passion,” he said, “We have great schools and state programs that make school more affordable, and we have excellent shuls and places for Torah learning at every level and for every age.” PJC

Nicole Raz writes for the Jewish News of Phoenix, an affiliated publication where this first appeared.