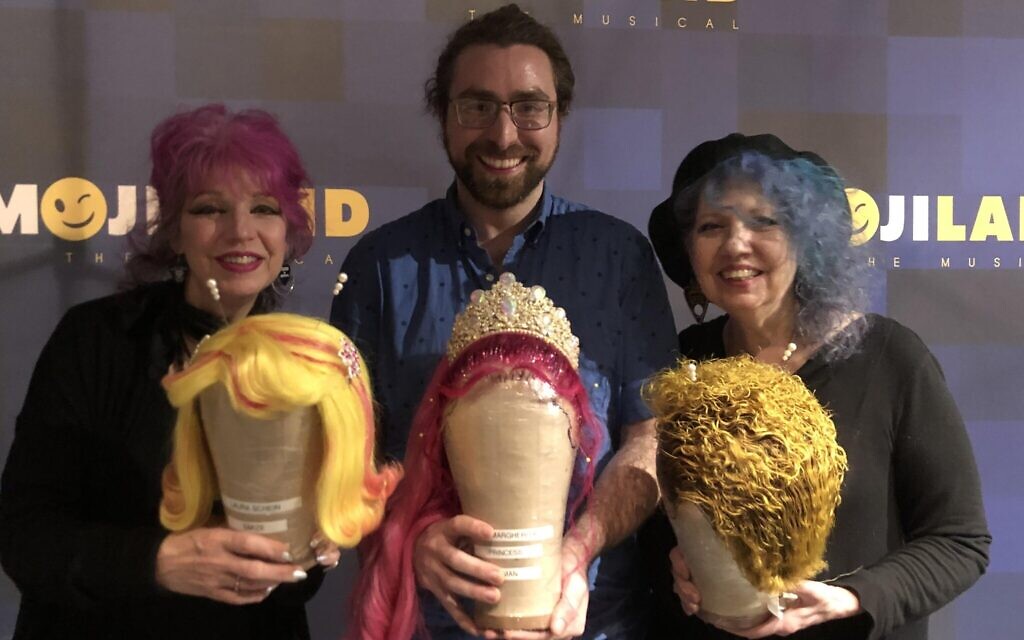 Pittsburgher Bobbie Zlotnik always wanted to work on Broadway — he just couldn’t quite figure out how to do it.

Then, when getting involved in school musicals at Avonworth High School about 15 years ago, he offered to help the female leads with their hair and makeup — and a path was forged. Today, he designs and consults for shows both on and off the Great White Way, films and TV, and runs a successful wig business out of a midtown Manhattan studio.

“It was kind of a natural progression, doing hair in the theater,” Zlotnik told the Chronicle. “I always had loved all aspects of theater. I made these set models out of the tours that came to town. It was crazy — in a good way.”

Zlotnik grew up in Lincoln Place, a neighborhood in the southeast corner of Pittsburgh, before moving to Sewickley during high school. He became a bar mitzvah at Congregation Beth Shalom in Squirrel Hill. Around the time he graduated from Point Park University in 2009, Zlotnik interned with Pittsburgh CLO and learned the art of applying and caring for wigs — as well as how to properly conceal microphones in them. Up until the CLO experience, he joked, “I was kind of just making it up as I went along.”

A year later, he was studying at Aveda Institute in New York City — much closer to the Big Apple’s historic theater scene. At first, hair and wigs were a way to get by while Zlotnik pursued acting. It was “an easier way to make money than waiting tables,” he said.

“But I just ended up booking hair job after job,” Zlotnik said. “I was doing regional theater gigs out of town. So, I started focusing on doing hair full time.”

To date, Zlotnik has served as an understudy, or “hair swing,” on 24 Broadway shows, including working for seven years on “Beautiful: The Carole King Musical.” During that time, he also was designing hair for several off-Broadway shows.

“I love it so much,” Zlotnik said. “My favorite part of it is creating the character. I love seeing the transformation a performer can go through with the right hair and makeup.”

But Zlotnik does more than design or maintain wigs for shows. He’s become a staple for providing dramatic wigs to drag queens on the show “RuPaul’s Drag Race,” and he also runs a side business buying discounted wigs, restyling them then reselling them for profit on eBay and elsewhere.

As an illustration of the scope of his “side job,” during the pandemic, Zlotnik was making three wigs every week from March 2020 until May 2021.

When he’s not busy with theater, Zlotnik works in film and TV on shows like Netflix’s “Halston,” which stars Ewan McGregor, and HBO’s “The Gilded Age,” the much-anticipated historical drama from “Downton Abbey” creator Julian Fellowes.

“Bobbie is my go-to for hair,” Leuck, a Wisconsin native who moved to New York City in 2004, told the Chronicle. “I think he’s amazing. He’s wickedly talented and such a wonderful collaborator. I call him for anything I need a wig for.”

“Emojiland,” oddly enough, featured a plot point where a virus starts to infect its characters; the COVID-19 virus shut down its off-Broadway run last March.

Zlotnik has weathered the pandemic well, but its onset was a bit of a shock for him.

“Within a week or two, I lost everything — it was a major setback to me,” Zlotnik said. “But doing film and TV has taught me how to get a leg up.”

In addition to his wig-making “side job” and his work on “RuPaul’s Drag Race,” Zlotnik has found other ways to stay busy — and is relieved things are returning to a kind of new normal.

Though his parents haven’t seen one of his shows in a while, they remain very supportive, he said, adding, “I think they’re happy that I’m happy and I’m doing what I love — that I’ve found my niche.” PJC