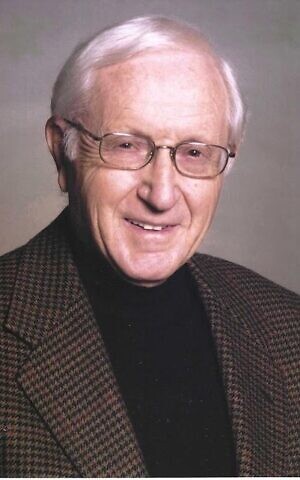 LATTERMAN: Earl Merwin Latterman passed away at the age of 92 on Sept. 20, 2021, in his hometown of Pittsburgh. Our beloved “Poppy” was a life-long learner and self-described “futurist” who lived life with the optimistic belief that mankind is empowered to change the world for the better. Earl was an avid tennis player, golfer, and skier, actively participating is all three sports right up to his death. A graduate of Carnegie Tech and its Graduate School of Industrial Administration, Earl began working at Northern Light Company, his family’s lighting business on the North Side. He joined Tygart Industries, a manufacturer of steel plate products, in the early 60s and served as its president for many years. After selling the business in the mid-80s, Earl moved to his third career as a trusted financial advisor at Advest and Merrill Lynch where he continued to provide caring advice into his 80s. Poppy was actively involved in the community and especially had a deep passion for the Jewish Community Center, serving as its president from 1979 to 1982. With his late brother Bernard and in memory of their parents, they established the Sam and Ida Latterman Volunteer Mitzvah Award, presented annually to an individual whose outstanding achievements contributed to the success of the JCC and the community. Earl loved to read and was always researching a new subject. Whether it was the environment, longevity, technology, or reincarnation, Earl’s shelves were stocked with books, meticulously bookmarked with paper scraps to highlight important passages. He even taught a course on “Exponential Technological Growth and its Impact on the Future” at the Osher Lifelong Learning Institute at Carnegie-Mellon University. Earl would never hesitate to share his opinion on a wide variety of subjects, but he would also listen to others intently and graciously, even though he was rarely swayed. Earl was preceded in death by his parents, Sam and Ida, and his brother, Bernard. He is survived by his wife of 67 years, Marilyn, sister, Vitie Friedman, sister-in-law, Eleanor Feldman (Bruce), children Michael (Jose), Sue Ann, and Steven (Leslie), grandchildren Shelby and Spencer, and numerous nieces, nephews, cousins, and friends. Funeral services were held at Rodef Shalom Congregation. Contributions can be made to the Jewish Community Center of Greater Pittsburgh, 5738 Forbes Avenue, Pittsburgh, PA 15217 or the Jewish Federation of Greater Pittsburgh, 2000 Technology Drive, Pittsburgh, PA 15219. Arrangements entrusted to Ralph Schugar Chapel, Inc. family owned and operated. schugar.com PJC