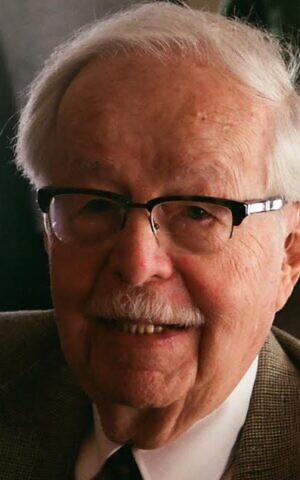 STOLZER: Dr. Bertrand Lubell Stolzer passed away at the age of 95 on Aug. 17, 2021, in Cleveland, Ohio. He was born in New York City to the late Harry and Rose (née Lubell) Stolzer on Sept. 4, 1925. He graduated from The Bronx High School of Science in 1942, earned his B.S. and M.D. from New York University in 1945 and 1947, and completed his residencies at Bellevue and Goldwater Hospitals. He married the late Pearl (née Peterman) in 1949 shortly before his induction as a captain into the United States Air Force.
He completed basic training at Gunter Air Force Base in Huntsville, Alabama, and earned a fellowship to the “Strep Lab” at Francis E. Warren Air Force Base in Cheyenne, Wyoming, where he researched the medicinal applications of penicillin for strep throat and rheumatic fever for which he and his research team earned the Lasker Award for their findings.
In 1955, Bertrand and his growing family moved to Pittsburgh, where he practiced rheumatology for more than 60 years at the H.M. Margolis & Associates Group at St. Margaret Memorial Hospital and the University of Pittsburgh Medical Center. In collaboration with his colleague, the late Dr. Carl Eisenbeis, he helped create the Doris Palmer Arthritis Center, in memorium for the late Arnold Palmer’s mother.
After 29 years of marriage, his wife Pearl passed away in 1978. He married his second wife, the late Shirley (née Zimmerman) Lederman in 1979, adding three more children to his large family. He also cherished his close friendship with the late Dolores Mannix Ryan.
During his lifetime, Bertrand had a passion for music including listening to classical, folk and jazz, notably Pete Seeger, Woody Guthrie and The New Orleans Preservation Hall Jazz Band. He loved animals and visiting the Bronx Zoo in his youth. He supported charities to save whales, chimpanzees, elephants and sea turtles. He enjoyed the stage and film productions of Mel Brooks and Woody Allen. He also savored ice cream, egg creams, Mallomars, pizza, and salami sandwiches.
Bertrand loved his family, friends, practicing medicine, his patients, and each of his 11 dogs throughout his 95 years of life. He was an avid baseball fan who attended New York Yankees games as a youth, seeing Lou Gehrig and Joe DiMaggio from the outfield bleachers at Yankee Stadium, and then a Pittsburgh Pirates fan who watched Roberto Clemente win two championships. For 25 years, he visited Cape Cod each summer with his children and grandchildren.
Bertrand is survived by his children: Janice (late Andrew Morrison) of Cleveland, Susan (late Nathan Fishbach) of Milwaukee, Daniel (Julie) Stolzer of Lancaster, Pennsylvania; stepchildren: Maury (Lynda) Lederman of Boston, Ruth (Tim) Heeren of Boston, and Hal (Sharon Saltzman) Lederman of Pittsburgh; his grandchildren: Dr. Amy Zack, Peter (Kristin) Morrison, Ben Morrison, Jeffrey (Erica) Fishbach, Brian Fishbach, Michael Fishbach, Rachel Stolzer, Hanna Stolzer, Eli (Meg) Lederman, Dr. Molly (Dr. Eli) Miloslavski, Emily Heeren, Aliza Heeren, Craig Lederman, and Matthew Lederman; and many great-grandchildren.
In lieu of flowers, please donate to: The Bert Stolzer Arthritis Fund at UPMC St. Margaret, 815 Freeport Road, Pittsburgh, PA 15215. The Fund was established in his honor by his children, to create the Bertrand Stolzer Arthritis Center at UPMC St. Margaret Hospital, to further their dad’s lifelong passion for medicine and desire to enhance arthritis education in Western Pennsylvania, specifically by helping to make resources available for patient care and resident training at UPMC St. Margaret Hospital. PJC