Running Community Supermarket, a chain of grocery stores with a 94-year history, is a privilege, said Rosenberg, the chain’s owner.

Rosenberg’s grandfather, Louis Rosenberg, opened the first Community Supermarket in Penn Hills in 1927. Since then, other stores were opened across the region, including in Lower Burrell, Natrona Heights and Bloomfield. Howie Rosenberg, 58, began working at the Penn Hills store when he was 15.

Joining the business, he said, not only allowed him to see how his father, Jerry Rosenberg, and uncle, Paul Rosenberg, ran the store, but also provided insights about his grandfather.

Customers frequently recalled how Louis gave out loans during World War II and distributed food during the Depression.

Howie Rosenberg, a Fox Chapel resident and member of Adat Shalom Synagogue, said because his grandfather recognized people’s financial insecurities, often he did not collect on their debts to the store.

Those tales gave Howie Rosenberg a model for customer relations — in recent years, Community Supermarket has given Adat Shalom free food and gift certificates at highly reduced costs — as well as an understanding of family history.

“I knew that my grandfather was well liked and respected, but until I got in here years later, I didn’t know how revered and respected he was,” Rosenberg said. “You would think that people would have forgotten, but they remembered.” 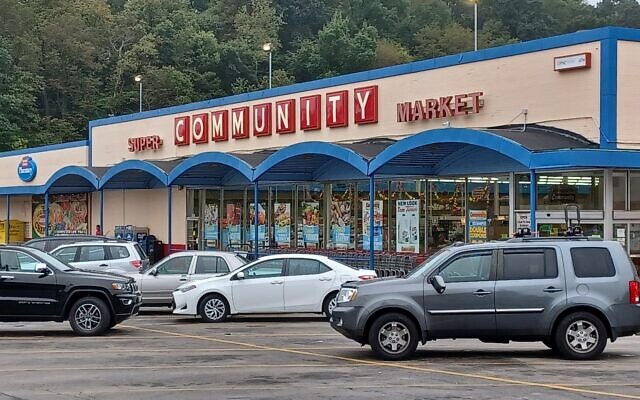 To this day, memory plays a part in the success and longevity of Community Supermarket, Rosenberg said: His staff knows their customers’ names, and their customers know the names of the staff.

“We’re there every day,” he said. “I think that means something.”

Rosenberg credits loyal customers and employees with helping Community Supermarket last nearly a century, but said certain problems have developed due to the pandemic.

“People don’t want to work,” Rosenberg said. “It’s just impossible to get anybody really since COVID. People are getting all these checks from the government.”

He said that Community Supermarket is “better staffed” than many other small businesses, but still many positions — including cashiers, deli workers and even managers — remain open.

“In fairness, we’re better off than most,” Rosenberg said. “Some stores are closing the deli at 4:30 or 5 because they don’t have enough people. We close our deli about an hour before the store closes.” (Community Supermarkets close at 9 p.m.)

Some of Community Supermarkets’ stores have come and gone over the 94 years since Rosenberg’s grandfather opened his first, but the core of the business remains the same, Rosenberg said. Still, there are obvious changes in the way the business functions now compared to how it operated nearly a century ago. For starters, of course, there’s a big difference in the dollar amount of the sales.

And obviously the technological changes, such as self-checkout registers, would be unrecognizable to previous generations.

But despite the new technology, a customer from 1927 and a current-day patron would have a similar shopping experience, as Community Supermarket prides itself on the same things Louis Rosenberg did when he opened the first store in 1927, his grandson told the Chronicle.

“We have a good name and a good reputation,” Rosenberg added. “I’m grateful that we’ve made it for 94 years and proud to be part of something special.” PJC