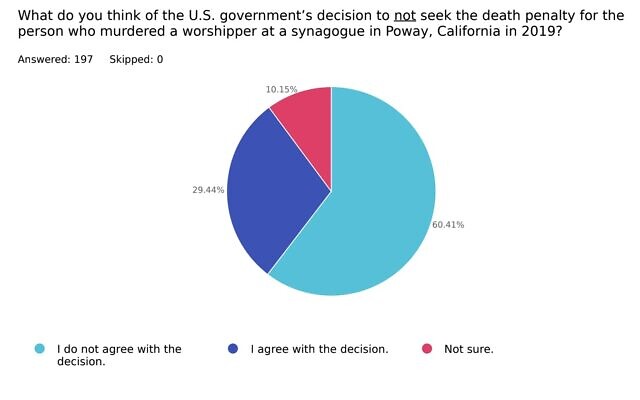 Do not waste resources and energy that will be expended during countless appeals. Just let him rot for a Life Sentence.

The United States is one of the few civilized countries to still have the death penalty. The death penalty is not a deterrent, is racially discriminatory, is more expensive than life imprisonment, is immoral, debases us, and is nothing more than legalized murder. If it`s meant to be a deterrent why isn’t it carried out in public? It would make for great reality TV. Shameful!

I believe that the death penalty should be imposed for heinous crimes such as this, targeting peaceful people at worship for death. It is a moot point, however, because our country rarely executes the worst of the worst. Instead, we provide the criminal decades to pursue appeals during which we foot the bill for their food, housing, medical care, and legal services.

We are too soft on punishment for antisemitic and other hate crimes. It was a planned attack and should be treated as a “terrorist” attack. Therefore he should be tried, found guilty and put to death. Maximum “appeal” time should be no longer than five years.

I think the Tree ofLlife murderer should get the death penalty also.

Death penalty for people who kill people. DNA helps identify the killers so no innocent persons are jailed for years. One appeal is sufficient and then death sentence should be carried out. Murderers should not be in prison for decades.

First of all, he took the life of an innocent person for no reason. Second, it sets a precedent for punishment to those who kill others. Third, it allows the continued expression of anti-Jewish behavior in extreme, unacceptable ways

Accountability seems to be a major issue in California. It also seems to be a broader federal issue. I’m not a legal expert, but a cursory Google search/scan has revealed to me that he pleaded guilty in exchange for the prosecution to not seek the death penalty. If someone were to be sentenced to death, it is my understanding that the decision can be appealed again and again. This comes with a financial cost as well as a potential emotional toll on victims and their families. To me, it feels as though a repetitive appeals process would turn the memory of Lori Gilbert Kaye into an abstraction of legal proceedings. The murderer, as I prefer that he remains nameless, now has all the time in the world to sit and marinate in what it means to feel the consequences of being hateful, misguided, ignorant and violent. He has time to understand that in harming and destroying so much, he destroyed himself. The bigger question is in my mind, how do we make the world safer? Can we truly guide everyone to understand the depths of the sanctity of human life? To understand the sanctity of Jewish life? Can we quell the rage? Can we help people understand that misguided anger is not served by murder? Clearly, our current systems can only manage the deep-rooted and tragically ubiquitous darkness that plagues humanity. Legislation and prosecution can only deter so much. I pray for clarity for us all on this issue, as I suspect this one case and how it was handled only scrapes the surface of the terrors of antisemitism and violence in America. To the memory of Lori Gilbert Kaye, may she be honored and remain in our hearts, always. PJC