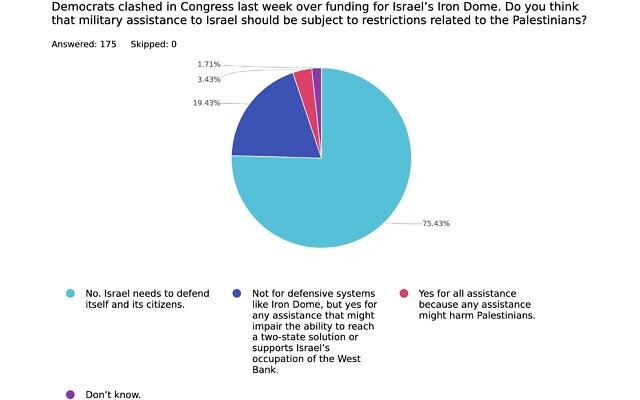 Last week, the Chronicle asked its readers in an electronic poll the following question:
“Democrats clashed in Congress last week over funding for Israel’s Iron Dome. Do you think that military assistance to Israel should be subject to restrictions related to the Palestinians?”
Of the 175 people who responded, a solid majority (76%) said, “No, Israel needs to defend itself and its citizens”; another 20% responded, “Not for defensive systems like Iron Dome, but yes for any assistance that might impair the ability to reach a two-state solution or supports Israel’s occupation of the West Bank.” Six people (4%) responded, “Yes for all assistance because any assistance might harm the Palestinians.” Thirty people submitted comments. A few follow.

Arab citizens of Israel, along with all people, must be protected from Hamas rockets. Hamas needs to stop putting the people of Gaza in danger. They have rights, too.

Be careful of your paper’s democratic bias. The party is becoming more and more anti-Semitic.

At some point the question can expected to be raised, given Israel’s economic strength/success, why does it still need subsidies from the United States? I know there are good answers to this questions, but we must be prepared to articulate them.

Unlimited military aid to Israel serves to maintain the status quo in the West Bank and Gaza. No one can deny that the status quo is leading toward a one-state solution with no citizenship or property rights for Palestinians. If we love Israel we won’t let that happen.

The Iron Dome protects innocent Israel citizens (which includes Christian Arabs and Israeli Muslims). Of course Israel is the only democratic country in the Middle East and should receive all the funding it needs to survive.

All aid should be cut off until Israel ends the occupation. We support the continuing repression of another people by continuing our massive aid to Israel. A country whose standard of living is equal to many European countries does NOT need our aid. If they want to be conquerors let them finance it themselves.

If your neighbors, unprovoked decided to physically attack you or your relatives how would YOU react?

We wouldn’t even be discussing this question if Congress were consistent. We don’t put military assistance restrictions on Saudi Arabia for its horrible human rights abuses, Afghanistan pre-Taliban takeover for its terrible corruption, Jordan for its repression of constitutional rights, Colombia for its tacit support of the drug trade, Nigeria for its environmental destruction, Pakistan for its human rights abuses, or Egypt for its corruption and legislated discrimination. We don’t even discuss limitations on these countries, but Israel is held to an unreasonably high standard at the same time. My only conclusion is that the unreasonable standard is either due to A) a false premise that Israel should be held to a higher standard as a democracy, or B) antisemitism, or C) both. PJC