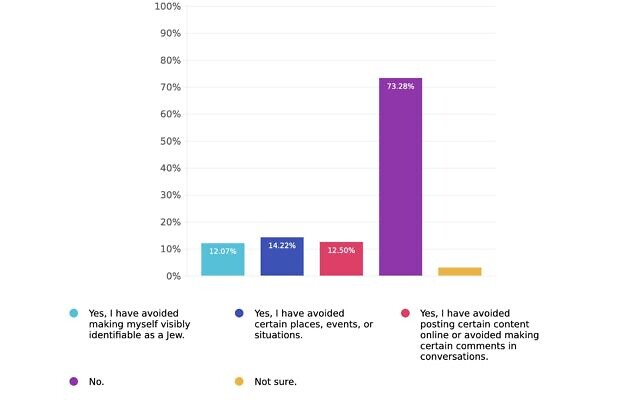 Last week, the Chronicle asked its readers in an electronic poll the following question: “In a survey just released by AJC, 40% of American Jews said that fear of antisemitism spurred them to change their behavior over the past year. Have you changed your behavior in the last year due to fears arising from antisemitism?” Of the 232 people who responded, 73% (170 people) answered “No.” But about a quarter of respondents said they had changed their behavior. Twenty-eight people said they had avoided making themselves visibly identifiable as Jewish, and 33 people said they had avoided certain places, events or situations. Twenty-nine people have avoided posting certain content online or avoided making certain comments in conversation. Fifty-seven people submitted comments. A few follow.

Unfortunately, wearing a kippah puts a target on you these days.

I still wear tzitzit. I still build a sukkah. I still make TikToks about my holidays. I will still put a Hanukkiah menorah in my window. I may or may not decorate for Hanukkah but that is simply to make my life easier. And my Facebook cover pictures still indicate the seasons of the year we are in. Facebook is where I have received the most hate in the past. I just block those people.

Improvement in doing mitzvot (those that you already are doing and/or add another mitzvah to what you are already doing) and/or learning more Torah (join some online classes) will ultimately add merit and protection.

Be more Jewish! Protect yourself and be proud of who you are.

I’ve stopped wearing my Magen David necklace. Though now I think that is cowardly, and I’ll think about resuming.

I have not changed my behavior, but it does sadden me.

Antisemitism needs to be FOUGHT, NOT feared!

I learned as a child to be proud to be a Jew, but not advertise it!

We are not socializing. With limited outings we have had no problem.

Other than purchasing a pistol and getting licensed and trained, no change in my public behavior.

I took my mezuzah off the door of my condo with common hallways. There were attempts to pull it off. At the cemetery I am careful and make sure no one follows to destroy headstones of family members.

It is difficult to live this way but, I am cautious about where I go and what I say to strangers.

The only change in my behavior is that I now feel more compelled to call out antisemitism when/wherever I see it.

I wear a chai necklace instead of a star, since most non-Jews don’t know what it is.

I don’t live in fear. If I come across antisemitism I ignore it or I deal with it, but I don’t change my behavior or appearance.

The is no Jewish future in America. We’re making Aliyah.

There is antisemitism. It does not rise to the level of crisis. The paranoia whipped up by local Federations and other communal agencies is neither helpful nor needed. PJC