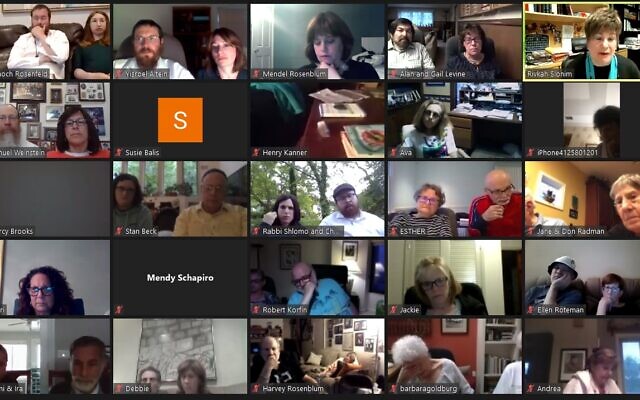 Over 250 members of the Pittsburgh Jewish Community participated in a Zoom Q&A with Rivka Slonim presented in partnership will all of the local Chabad Centers. Screenshot provided by Rabbi Yisroel Altein.

Despite – or perhaps because of – the social distancing mandated during the pandemic, the Chabad centers of Pittsburgh have found new ways to collaborate and bring unique programming to the Greater Pittsburgh Jewish community.

The new virtual events are attracting large numbers of people together from across the region, a scenario that was more difficult to muster when hearing a speaker required crossing a bridge or going through a tunnel.

“We’re trying to do programs that aren’t just another class,” explained Chabad of Squirrel Hill Rabbi Yisroel Altein. “We’re trying things that are out of the ordinary and that we may not have done on our own but that we can join together and offer as a dynamic program for all the different Chabad centers together.”

That type of dynamic programming was on full display Tuesday, May 19 when Chabad of Squirrel Hill, along with partners Chabad of Monroeville, Chabad of the South Hills, Chabad Young Professionals, Chabad of CMU and Chabad House on Campus welcomed Rivkah Slonim for her presentation “What Hollywood Gets Right and Wrong About the Show Unorthodox.”

The Zoom event was viewed on over 250 computers and devices. Since more than one person could watch the presentation on each device, that means that the actual number of attendees could have been closer to 300-350. In fact, so many people tuned into the event, Altein had to subscribe to a higher Zoom plan minutes before the program was scheduled to start to accommodate all of the viewers.

Building on the success of this initial program, Altein’s wife and Chabad of Squirrel Hill co-director, Chani Altein, created the program “Shabbat in an Hour” with cook and author Reyna Simnegar on June 4.

“I was toying with the idea of doing a cooking demo about Persian cooking with Reyna Simnegar,” Chani Altein said. “On the heels of the ‘Unorthodox’ program, I reached out to the other Chabad women and they were all in.”

The rebbetzin sees two advantages in creating these types of virtual programs with the other Chabad centers: cost and egalitarianism.

“It’s a great way to bring costly programs without paying as much, that pulls from all of our different communities,” she explained prior to the event. “At first, I thought the cooking demo was going to be women only, because when I have cooking classes, they are women’s classes, but some of the other Chabad Houses said they preferred to open it to women and men. So, it turns out, this one will probably be mostly women with a sprinkling of men.”

Time and convenience contributed to the success of the first event about “Unorthodox,” said Chabad of Monroeville Rabbi Mendy Schapiro, and that is why it makes sense to continue this type of collaborative programming in the short term.

“When it comes to these types of events, it has to be really interesting for people to put it on their calendar and say, ‘I want to leave my house, take a few hours and go out.’ Even if they are only once a week or once a month. What this does is allow us to bring the joy of Judaism through programming to all of our communities.”

Schapiro is quick to point out that it does not make sense to share all of the programs the various Chabad centers offer.

“There’s a balance,” he said. “On the one hand, every community has their rabbi and rebbetzin that they’re friendly with, there’s a personal connection that brings them to events. When it comes to daily classes and events, it makes sense to keep it local. Then there are larger programs that we can present without the barrier of travel, online, and take advantage of the opportunity.”

In fact, there is one annual program the Chabad centers typically have collaborated on for years, noted Yisroel Altein: the commemoration of the yahrzeit of the Lubavitcher Rebbe, Rabbi Mendel Schneerson. Because of the pandemic, that program, too, will now be offered online by all of the local Chabad centers.

“We’re showing a documentary called ‘The Rabbi Goes West,’ with a colleague in Montana,” Yisroel Altein said. “Following that, we are going to do a Zoom question and answer with him.”

Altein realizes that after three months of social distancing and sheltering at home, there is a chance people are beginning to get “Zoomed out.” He also knows that despite entering the green phase and the lessening of restrictions, “as we move into the real world, it’s going to take time for us to figure out what that means. People are still expecting social distancing and are still struggling with what that looks like.”

Because of that uncertainty, the rabbi ventured “we probably have some more time online.”

With the success of attracting a virtual audience for events presented in partnership with the other Chabad centers, Yisroel Altein is interested in seeing if the same results can be attained in the physical world.

“I’d love to see how these types of events would turn out in the real world and find unique programming we can share,” he said.

Even a rabbi realizes, though, that in Pittsburgh, there are certain limitations that may be too hard to defeat.

“Would you cross a river?” he asked with a laugh. PJC