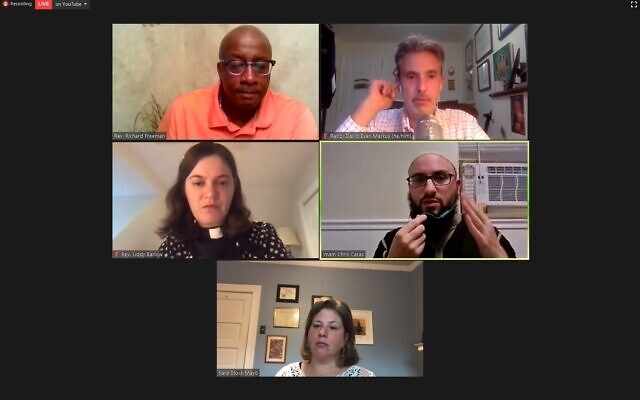 Sarah Stock Mayo moderated a panel discussion of voting as a moral imperative with leaders from Christian, Jewish and Muslim communities. Screenshot by David Rullo

Leaders from various faiths gathered virtually on Sunday, Aug. 17, to examine the obligation to vote through a panel discussion hosted by Bend The Arc Jewish Action Pittsburgh and moderated by Sara Stock Mayo.

The 75-minute Zoom conversation discussed the importance of voting for down-ballot candidates who can affect communities more directly that national candidates, voter disenfranchisement and where the obligation to vote from a moral perspective is found in various faith traditions.

In addition to the moderated discussion, panelists fielded questions from those watching online. Audience members asked about the responsibility of voters after an election and whether religious institutions and public schools should provide voting education.

Markus began by discussing the importance of justice in both religious and civic institutions.

“One of the strongest ways we can exercise the ability to bring about justice is by voting,” he said.

Freeman said he felt voting, as a moral imperative, needed to be filtered through common morality, faith-based morality, and personal morality, meaning his views may not always harmonize with those of different faiths.

Caras pointed out that members of his congregation were often fearful of voting because of the oppressive governments from which they escaped.

Barlow contrasted that fear with white Christian communities where “we have become accustomed to having our needs catered to by political systems, by being in charge of political systems and expecting our desires to be met by the system with no regard for how others function.”

Concluding with a statement addressing his fear of religious institutions becoming entwined in civic education, Markus offered: “We need to do it, but the flip side is that the separation of church and state exists theoretically to protect each from the intrusion, encroachment and capture of the other.” PJC