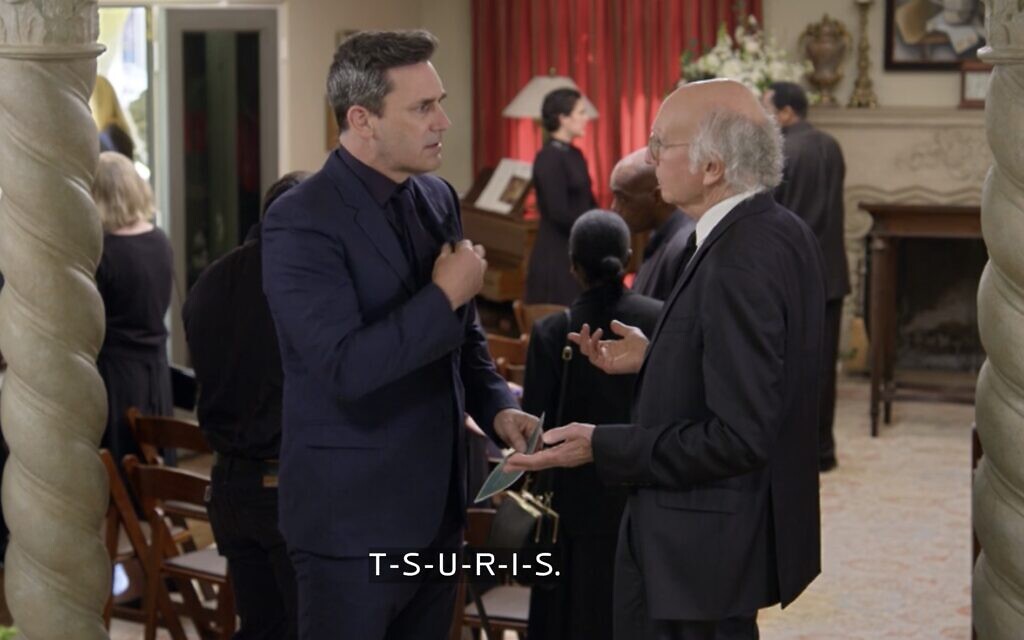 Jon Hamm and Larry David discuss Yiddish words during the first episode of Season 11 of "Curb Your Enthusiasm." (Screenshot from HBO via JTA)

Spoiler alert: This article contains plot details from Episode 1 of Season 11 of “Curb Your Enthusiasm.”

(JTA) — Matzo balls, shiva calls and a Yiddish lesson all played a role in the first episode of the 11th season of “Curb Your Enthusiasm,” which premiered on HBO Sunday night.

The episode offered a case study in why “Curb” has been called “the most Jewish comedy show ever” and suggests that Larry David, its writer, producer and star, has no intention of ceding that mantle.

The episode’s dual storylines each had Jewish elements: In one, David auditions actresses for his new show, using a scene that involves eating a matzah ball at a Passover seder. For his own reasons, he chooses a contender who mispronounces “seder” like “cedar” and “bubbie” as “boobay.”

The other main storyline is about a memorial service that David’s friend Albert Brooks, the famous Jewish actor whose given name is Albert Einstein, throws for himself while he is still alive.

The actor Jon Hamm arrives wearing a torn black ribbon, customarily worn by Jewish mourners to approximate the tradition of rending one’s clothing upon learning of the death of a close family member. David asks why.

“You know, the shiva … the rending of the clothes,” says Hamm, who is not Jewish, using the Hebrew word for the seven-day mourning period that begins after burial.

Hamm then consults with David on the appropriate use of the Yiddish word “bashert,” meaning “destiny.” Can he say, he asks, “I’m feeling a lot of bashert at the loss of our friend Albert”?

David offers an alternative with the Yiddish word “tsuris,” meaning troubles, even spelling it out for Hamm. Hamm deploys the word during his eulogy, shortly before it takes a dramatic turn after a revelation about how Brooks behaved during the pandemic, which in the show’s world is long over. Filming was delayed on the new season, which came as a surprise to the show’s devoted fans, because of COVID-19. PJC