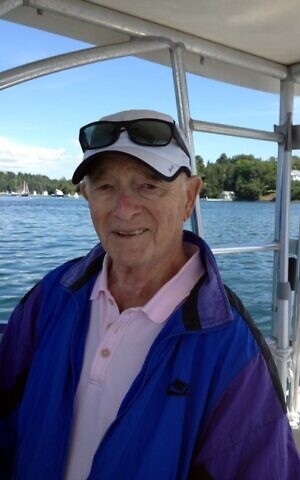 LAMPL: Sanford (“Sandy”) Lampl. After celebrating his 95th birthday at his home in Greenville, South Carolina, and surrounded by his family, Sanford (“Sandy”) Lampl passed away peacefully on Aug. 22, 2021.
Born on Aug. 22, 1926, “Pop” was a beloved husband, father and grandfather survived by his wife Priscilla, daughters Kathy Lampl, Peggy (Dave) Elkind, son David (Dorothy) Lampl, stepson Brian (Lori) Keller and his grandchildren Andrew (Melissa), Michael, Matthew, Sarah and Niko.
Sandy was a first generation American being the only child of the late Al and Irene Lampl. Sandy grew up in Squirrel Hill, attended Taylor Allderdice and went on to study at the University of Pittsburgh, both undergraduate and law school, where he graduated at the top of his class and received the prestigious Order of the Coif award.
Before retiring, Sanford was a prominent lawyer in Pittsburgh and was often referred to as the “Dean” of the bankruptcy bar.
Sandy was an intrepid boater who almost succumbed to the vortex of the Bermuda Triangle but survived that harrowing experience.
Always passionate about the ocean and rugged coastline, Pop and Scilla spent their best years in Nova Scotia at their cottage on Mahone Bay.
Stationed in Treasure Island, California, Sandy served in the Navy in World War II as an instructor of the newly developed technology known as RADAR.
In addition to his legal skills, Sandy possessed an indomitable entrepreneurial spirit and was involved in such diverse ventures as a chain of movie theaters, sporting goods stores, real estate projects in Vail Colorado and a textile operation known as the Quilt Gallery which brought him to South Carolina.
Pop was an avid tennis player up to the age of 88, playing multiple times a week with his good buddies .
A private service will be held at a later date.
Donations may be made to the American Heart Association. PJC