The Greenfield Giant Eagle has increased its kosher offerings in time for Chanukah this year. Photo provided by Yitzchak Goldwasser.

The shlep for Shabbat just a got a little easier for residents of Greenfield.

For years, the kashrut-compliant Jews living in the community would have to make the trek to Murray Avenue Kosher or the Squirrel Hill Giant Eagle to find a robust selection of kosher food products.

That is beginning to change, according to Chabad of Greenfield’s Rabbi Yitzi Goldwasser.

“There’s a joke in the Jewish community,” Goldwasser said, “that we have the whole Friday to get whatever we need, and an hour before Shabbat we remember the 100 things we didn’t buy.”

Community members would have to either travel to Squirrel Hill to purchase those forgotten staples, borrow from friends or neighbors, or go without for their Shabbos meals.

Seeing there was a need in the community, the Greenfield Giant Eagle has expanded its kosher offerings, ending the sundown dash.

The store is now under the supervision of the same manager who oversees Giant Eagle’s Squirrel Hill location and, Goldwasser said, is dedicated to helping the neighborhood.

“He really wants to show that he is here for the Greenfield community,” the rabbi said.

The manager (Giant Eagle did not give permission to the Chronicle to publish his name) is working with Goldwasser and Rabbi Elchonon Friedman of Bnai Emunah Chabad, which is also located in Greenfield, to bring in products needed by the community.

“Now, we can literally go down the block,” Goldwasser said. “Things are coming in. You want to have guests over or have a party or just sit for coffee with someone and have some snacks, you can get some nice, traditional Jewish products. It’s really making a statement that we’re here in the community.”

The expansion is a testament to the emergent Greenfield Jewish community, which has seen steady and substantial growth over the last several years, including the construction of a new mikvah and acquisition of the St. Rosalia Catholic School as the future home of the Yeshiva’s Boy School.

Goldwasser said he is now sending his Chabad of Greenfield magazine to more than 800 families and continues to see growth on social media.

“There are so many people — Orthodox, non-Orthodox — that are there every day, this was something that just had to be done and was a wonderful thing to do,” Goldwasser said. “I can’t walk down the street without getting a ‘shalom,’ even in Giant Eagle or the auto store. That was unheard of 10 years ago.”

The rabbi met with the store’s manager and also helped him select holiday items for Chanukah.

“These things are literally flying off the shelf,” Goldwasser said. “These are things the have not been in Pittsburgh before. It’s almost like Brooklyn.”

And if you aren’t sure of how to celebrate the holiday, Goldwasser, Friedman and Giant Eagle have you covered as well.
Chabad of Greenfield set up a table in the front of the store featuring items for sale, giving away menorahs, holding raffles and offering special giveaways. 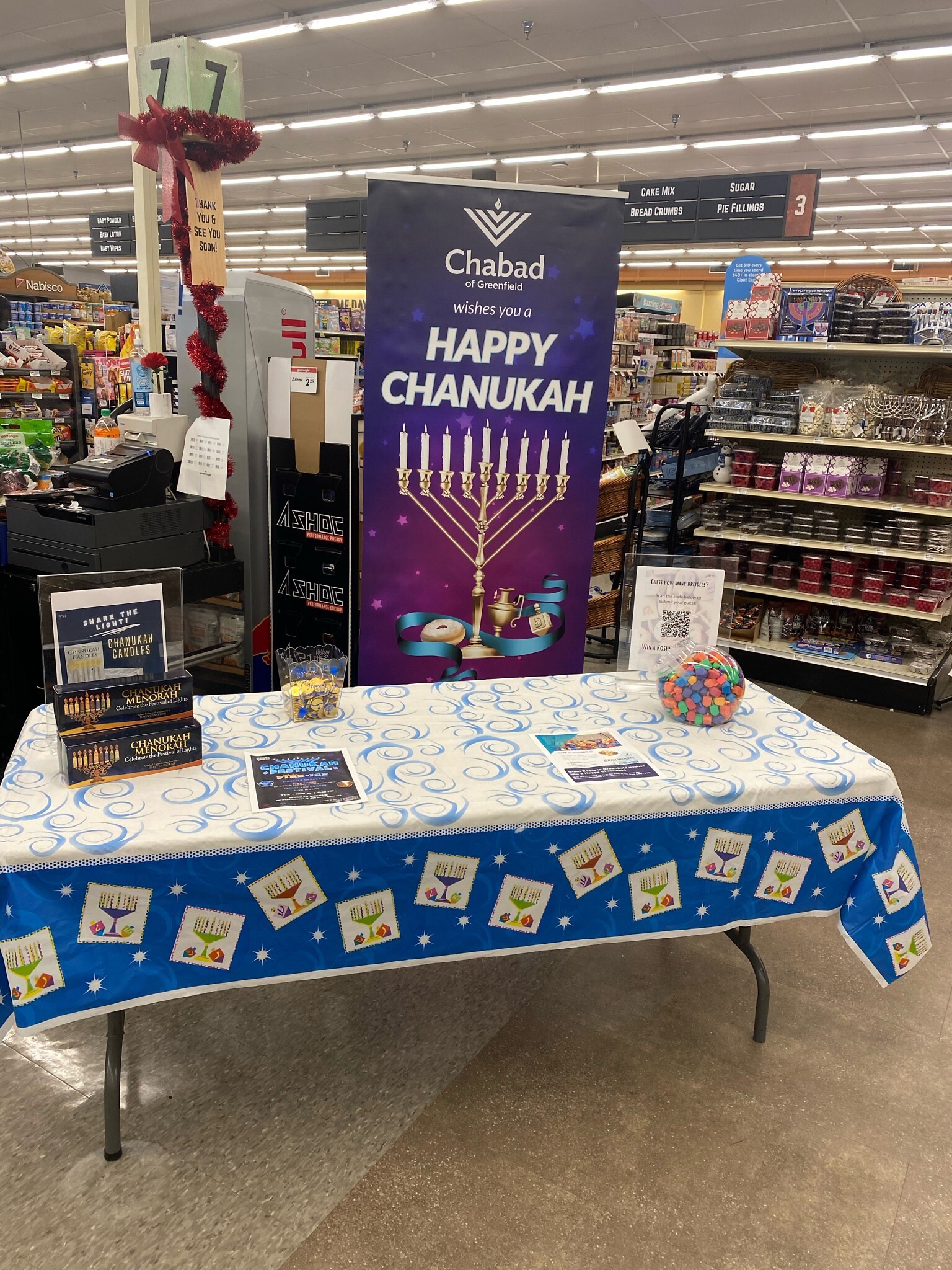 “The community greatly appreciates what we’re doing,” Goldwasser said, adding he expects to organize similar activities at Giant Eagle for other holidays.

The connection to the community is about more than business or money, Goldwasser said. He believes it shows that Greenfield’s Giant Eagle is giving back to its patrons and predicted that the efforts will pay off.
“They’re going to see over the next week, very strongly, how much the community recognizes and appreciates what’s going on,” he said.

The growth of the kosher food section is part of a greater connection to the community at large, Goldwasser said, noting the store is also increasing its selection of gluten-free foods and other specialty items that are in demand.

“The manager is literally going out of his way to accommodate the needs of the community,” Goldwasser said. “It’s a win-win for everyone.”

A spokesperson for Giant Eagle was not available for comment. PJC