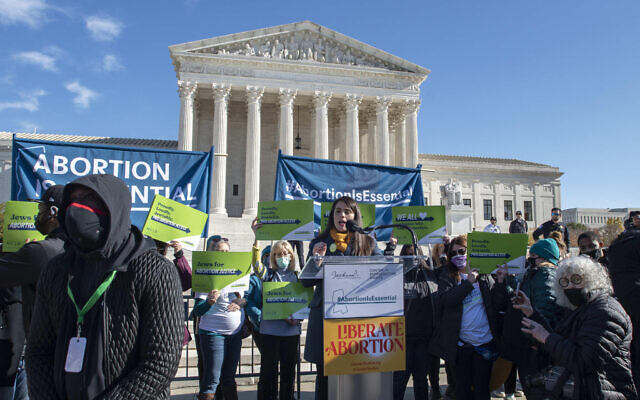 Sheila Katz, CEO of the National Council of Jewish Women, speaks at an abortion rights rally in front of the US Supreme Court in December. (Courtesy of Danya Ruttenberg.)

(JTA) — When the news broke Monday night that the Supreme Court could be on the verge of overturning Roe v. Wade, a major rally planned by Jewish advocates for abortion rights suddenly took on new significance.

The National Council of Jewish Women had announced the “Jewish Rally for Abortion Justice,” set for May 17 in Washington, D.C., last month. The event aimed to build support among Jews for defending abortion rights at a time that the rights were under attack. Now, the stakes would be even clearer.

But Rabbi Danya Ruttenberg, the council’s scholar in residence and a vocal advocate for abortion rights, was already thinking beyond the rally. Could the same rabbis who have organized abortion access-themed events at their synagogues as part of NCJW’s Rabbis for Repro initiative, she wondered, help Americans cut off from abortion access by the Supreme Court?

“We have the national network, and we’re going to give them the resources to be connected more effectively with their mobile networks,” Ruttenberg told the Jewish Telegraphic Agency. “They can be looking up their local reproductive justice organizations and saying, ‘Hi, we have a whole synagogue full of people. How can we help? What do you need? Do you need to fundraise? Do you need us to pick the Thursday shifts?’”

Ruttenberg’s question reflected the mood Tuesday among liberal Jewish groups that have long supported abortion rights and joined the country in being simultaneously blindsided and unsurprised by the leaked copy of the court’s draft published by Politico Monday night. The groups say they are determined to fight back against the court’s abandonment of Roe as settled law — and that doing so is a Jewish imperative.

“Abortion justice is an economic issue, a racial justice issue and yes, it’s a Jewish issue,” tweeted Rabbi Rick Jacobs, head of the Reform movement. “We will fight for abortion rights with all of our strength.”

The Rabbinical Assembly, an international association of Conservative and Masorti rabbis, cited Jewish teachings in its condemnation of the court’s draft.

“Jewish tradition cherishes the sanctity of life, including the potential of life during pregnancy, but does not believe that personhood and human rights begin with conception, but rather with birth as indicated by Exodus 21:22-23,” the group wrote in a statement.

Traditional Jewish law permits abortion in some circumstances and requires it when the life or health of the pregnant person is at stake.

“Hadassah, the Women’s Zionist Organization of America, reaffirms its unwavering support for full and complete access to reproductive health services and a woman’s right to make health decisions according to her own religious, moral, and ethical values,” the Hadassah leaders added.

Orthodox groups, which have grown increasingly aligned with Republican politics in recent years, said little about the Supreme Court news. Many told JTA that they would wait to learn more before expressing an opinion.

But at least one group representing American Jews that does not typically wade into partisan politics issued a statement about the draft opinion. Public opinion polls have found that the vast majority of American Jews support abortion rights, more than among any other religious groups.

For those who have made up their minds on abortion, the weeks ahead — before the Supreme Court’s final decision is expected by the end of June — will be busy indeed.

“This is something that’s really very, very upsetting to people all over the Jewish community and just causing a great deal of anger, upset. And ultimately, I believe that will result in actions in various ways that we still have yet to determine,” Rabbi Hara Person, head of the Reform movement’s Central Conference of American Rabbis, told JTA on Tuesday.

Now, not when the final decision is revealed, is the time to act, Ruttenberg said.

“If in fact Roe is going to fall, it must be with the loudest resistance, the loudest fury, the most thunderous run to the polls in November and the most active engagement around helping the people who are most impacted and taking action to change the future,” she said. “Because if this happens, and we shrug our shoulders like it is no big deal … then we are abandoning every single thing the Torah has been trying to teach us.” PJC