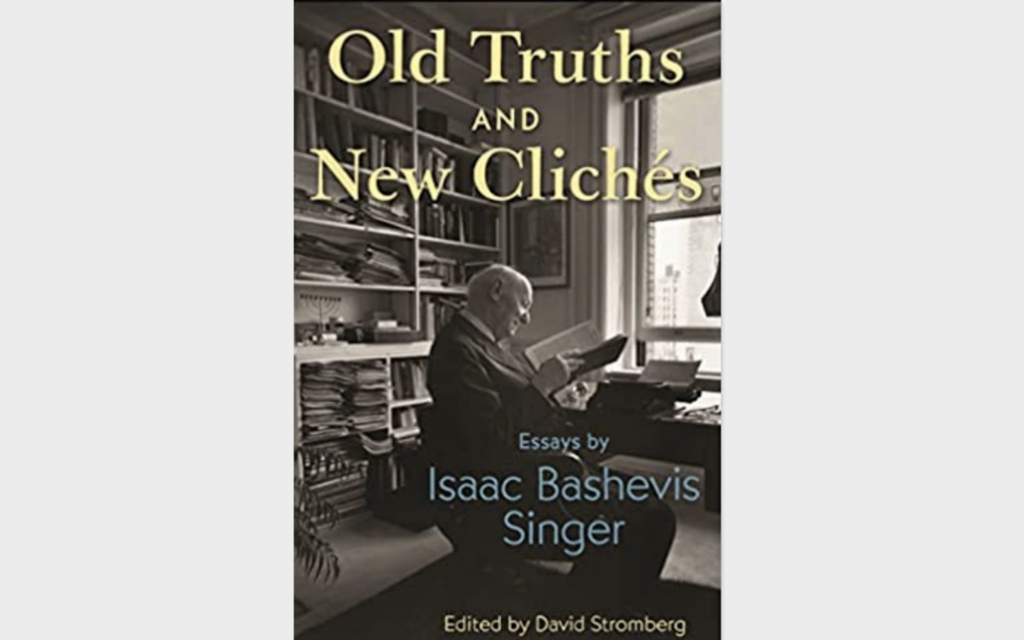 Somewhere in Heaven, Isaac Bashevis Singer must be smiling, or cursing. For years, he wanted to compile and publish a book of his essays. Thank God it finally happened — in my lifetime, at least.

“Old Truths and New Cliches” is a tremendous gift to the Jewish world.

Singer is known first and foremost — and, in some minds, exclusively — as a storyteller. An incredibly great storyteller. But he was also a true intellectual whose essays on literature, the Yiddish language and the Jewish enterprise are treasures that we can now digest and enjoy.

If you love his stories and novels, you will probably find yourself aligned with his views on literature. He allowed his characters’ thoughts and actions to speak for themselves, rather than subjecting the characters to psychoanalysis, which he knew was beyond his limitations as a writer. He also subscribed to the somewhat radical and unfashionable idea that a story should contain, you know, a story. A plot.

His essays on the Yiddish language did not align with my previous, errant thinking. Singer convinced me that Yiddish, in some important ways, is a better vehicle than Hebrew for describing the Jewish experience. I’m not going to reprise his argument here, but I’ll offer one quote that went straight to my heart:

Pausing … to let that sink in.

His perspective on Jewish history is equally valuable.

Our historical exile from Jerusalem had its drawbacks, to put it mildly. But Singer points out that it also enabled Judaism to evolve as a spiritual and ethical enterprise, free from the moral compromises inherent to statehood. Zionism, he notes, emerged only as a last resort, when the very survival of Diaspora Jews was in jeopardy.

The idea that exile has been essential to the ethical elevation of Judaism is not originally Singer’s. But he expresses the idea as well or better than anyone:

“The truth is that a people who must be ever prepared for war cannot live by high religious ideals. The preacher of love and the bearer of the sword are the greatest contrasts the human mind can entertain.”

We can’t quibble too much with editor David Stromberg’s curation here, as he only included essays that Singer himself had translated from Yiddish into English. In other words, these essays may very well have been the ones that Singer had selected for publication in book form.

But this collection does leave readers with an incomplete understanding of Singer’s relationship with God.

In this collection, we find Singer comparing God to a novelist, while we are both the characters and co-writers. Missing is an essay in which Singer presents a much more provocative conception. Addressing God in that essay, he wrote:

“You are consciousness and unconsciousness, cause and effect, faith and doubt, what we call reality and what we call dreams. You are the web of all our fantasies, every will and whim. In You roars the lion and hisses the snake. In You the righteous cries out and the evildoer laughs.”

Looking ahead, Singer believed that a “revitalized Judaism” must take the “form of a great spiritual vision and awakening.”

That vision and awakening, in Singer’s view and mine, includes a reframing of our relationship with animals. He wrote:

“We will never ascend to spiritual heights if we look down on God’s creatures, and if we consider them merely meat to devour, or objects of that bloody game called hunting. I believe that if there is ever to be a religious awakening and a reformulation of the old faith, it will require love and respect not only for people but also for animals. The religion of the future will include vegetarianism.”

I would slightly revise and update that vision: “The religion of the present must include veganism.”

Singer was the Jewish intellectual and ethical voice we needed — and need more than ever today. Thanks to this book, we have his voice at our fingertips, and feel it in our hearts. PJC

Jeffrey Spitz Cohan is the executive director of Jewish Veg, an international nonprofit organization whose mission is to inspire and assist Jews to transition to plant-based diets.