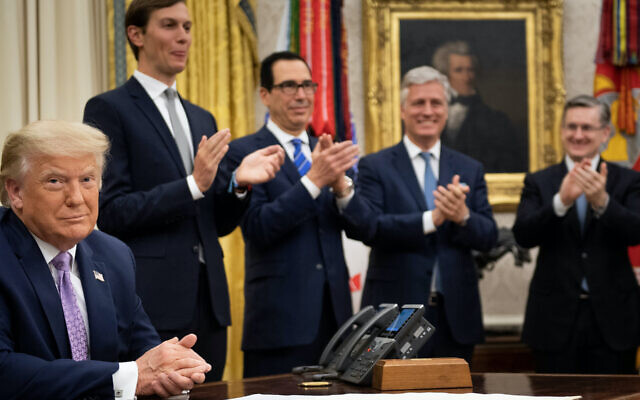 The condemnations in the Iranian media of the nascent Israel-United Arab Emirates peace agreement are hardly surprising. The regime’s leadership is covering its embarrassment and apprehension with a stream of defamation and threats. Iranian Parliament Speaker Muhammad Bakr Qalibaf called the agreement “despicable and a betrayal of human and Islamic values,” while Iranian President Hassan Rouhani warned UAE leaders “not to open their gates” to Israel. (An interesting exception to this pattern was the statement of former Iranian MP Ali Motahari, who tweeted, “Apart from the betrayal of UAE rulers, the blame was also on us for scaring the Arabs and pushing them into Israeli arms.”)

Israel’s rapprochement with the Gulf state is raising concerns in Tehran for a number of reasons. First, the regime fears that an alliance comprising Israel, the Gulf states and other countries, supported by Washington and Riyadh, would be a serious roadblock in the path of Iran’s goal of regional hegemony. A multinational system of that kind would strengthen its constituent members not only on the security level but also on the economic, commercial and cultural levels — a worrisome prospect for Tehran.

The prospect of such an alliance is particularly troubling to the regime at a time when its regional status is declining. Recent events in Iraq, Syria and Lebanon have negatively affected Tehran’s ability to promote its “axis of resistance” in the region. Its status in Iraq has been weakening since the October 2019 uprisings, a pattern that gathered new momentum after the killing of Qassem Soleimani in January 2020. The deep crisis now engulfing Lebanon and the Hague’s conviction of a Hezbollah member for the assassination of Prime Minister Rafiq Hariri do not contribute to Iran’s prestige. On top of all this, air strikes in Syria are severely hampering the regime’s attempts to turn the country into a front line against Israel.

Another element of the Israel-UAE deal that is causing discomfort for the Islamist regime is the problem of how to control discourse on the subject among the Iranian general public. The leadership is finding it difficult to explain the emerging ties between Israel and Muslim countries to its citizens. It is defaulting to the traditional pattern of labeling those states traitors to Islamic values and the Palestinian cause. Both Iran and Turkey are leaning on the Palestinian issue as a propaganda tool to advance their status in the Muslim world.

This message is not getting the traction it once did among ordinary Iranians. The educated social stratum in Iran does not buy the argument that normalization with Israel is a betrayal by definition. Compounding this problem, more and more Iranians are expressing the view that the regime’s investment of resources in Syria, Iraq, Yemen, Lebanon and Gaza comes at their expense. In an indicator of this trend, the slogan “Not for Gaza, not for Lebanon, I’ll sacrifice my life only for Iran” is heard more and more at Iranian protests and online.

The regime has been working since its inception in 1979 to inculcate an adversarial framework in the minds of the Iranian people, but it may have overplayed that hand. A large proportion of Iranian society has come to realize that that framework, promoted at the direction of the Supreme Leader, is intended first and foremost to ensure the survival of the Islamist regime — and the regime’s interest does not coincide with the people’s interest.

From the mullahs’ point of view, the Israel-UAE agreement is a painful blow because it sends a message that Muslim countries not only do not view Israel as an enemy that must be destroyed, but view it as a potential partner for mutual prosperity and security. The Iranian people, unlike their leadership, do not believe Egypt, Jordan and now the UAE are traitors to Islam.

The foreign policy of the Iranian leader- ship is designed to strengthen extremists at the expense of the welfare and prosperity of the country’s own citizens. The regime has no intention of altering this policy and will continue to threaten other countries in the Persian Gulf that might be considering a similar rapprochement with Jerusalem. It is possible that Iran will now concentrate its efforts on harassing oil tankers anchored in UAE ports.

Ever since its establishment, the Islamic regime has worked tirelessly to spread its revolutionary ideology throughout the Muslim world. This has caused tensions with countries across the Persian Gulf, including Saudi Arabia, Bahrain, the UAE and Iraq (during the reign of Saddam Hussein). This rivalry was one of the key factors leading to the formation of the Gulf Cooperation Council (GCC) in 1981. The GCC’s official goal was to strengthen and stabilize the Gulf principalities by tightening their security and economic ties. They were brought together largely by their collective fear of revolutionary Iran.

According to media reports, Bahrain is likely to be one of the next Gulf States to advance its ties with Israel. There too, Iran’s subversion of Bahrain served as a catalyst for the Khalifa family to establish ties with Israel.

Bahrain’s demographic structure is 70 percent Shi’ite, which rendered it, in the eyes of the Iranian regime, fertile ground for the advancement of its revolutionary world- view. As early as December 1981 the “Islamic Front for the Liberation of Bahrain” tried and failed to overthrow the ruling monarchy and establish an Iran-backed theocratic regime, and in 1996 the Bahrain authorities uncovered another attempt by Tehran to overthrow the regime and replace it with a theocracy according to the Velayat-e Faqih (Guardianship of the Islamic Jurist) model. Iran accompanied these subversive activities with “soft power” measures and support for opposition organizations, and it trained militants in the emirate.

The Iranian revolutionary model has been a threatening and destabilizing factor in the Middle East for decades. The greater Iran’s hostility toward the countries in the region, the greater the likelihood that they will eventually come together in some way to oppose it.

The formation of alliances among countries experiencing a common threat is not a new phenomenon in the Middle East. This was true six decades ago, when the Iranian monarchy felt threatened by the spread of Arab nationalism led by Gamal Abdel Nasser, and it is true today. The expression “the enemy of my enemy is my friend” is as valid today as it ever was, despite attempts to throw that realpolitik model into the so-called dustbin of history.

Revolutionary ideology relies on the demonization of the adversary as a means of justifying its values. The survival of a revolutionary regime depends on its ability to sustain such thinking in the minds of its citizens. The Israel-UAE deal makes it much harder for the Iranian regime to justify an imperialist foreign policy that comes at the expense of the Iranian people. PJC