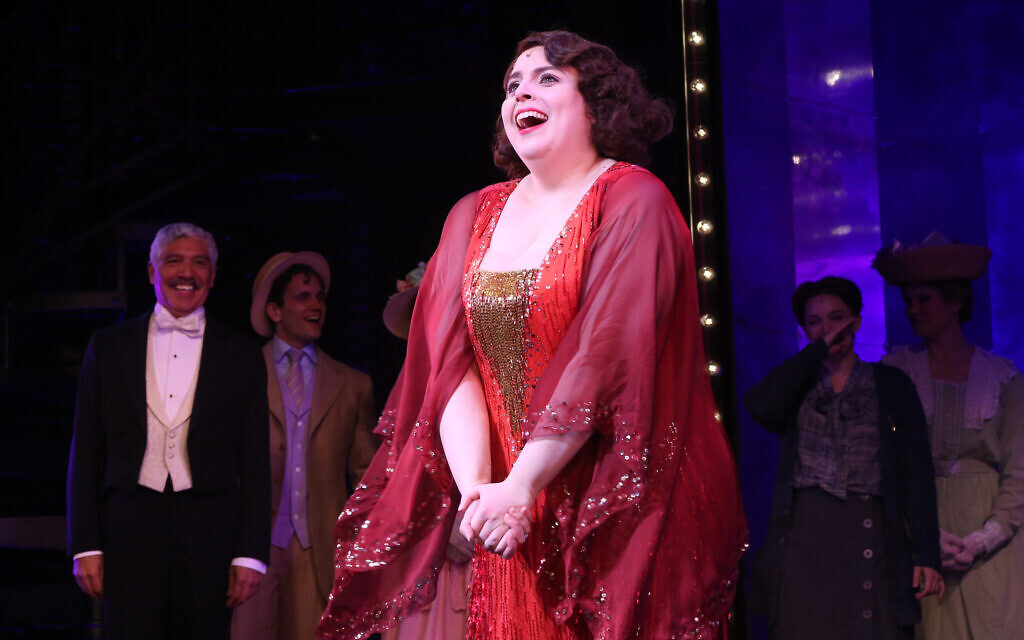 Beanie Feldstein as "Fanny Brice" during the opening night curtain call for the musical "Funny Girl" on Broadway at The August Wilson Theatre in New York City, April 24, 2022. (Bruce Glikas/WireImage)

(JTA) – Some of the biggest Jewish names on Broadway weren’t shining so bright in this year’s Tony nominations.

The much-anticipated revival of “Funny Girl,” with Beanie Feldstein in the Barbra Streisand role as pioneering Jewish comedienne Fanny Brice, came up almost empty-handed, despite Feldstein’s star status and the fact that the book was revised and updated by stage and screen legend Harvey Fierstein.

The show received only one nomination in total, for featured actor Jared Grimes, leaving Feldstein and Fierstein (and other top draws like co-star Jane Lynch) in the cold.

Jews and Jewish-themed shows were more successful elsewhere across the nominees, however. “The Lehman Trilogy,” an epic multi-generational history of the infamous Jewish family of financiers, received eight nominations, including best play; all three lead actors were also nominated, including Adam Godley, who is Jewish.

“Girl from the North Country,” a jukebox-style production built around Bob Dylan’s songbook, received seven nominations, including Best Musical and Best Book of a Musical; the Great Depression-era orchestrations of Dylan’s tunes were also recognized. “North Country” was the second musical to be built around Dylan’s songs, but reviews and ticket sales have indicated it was far more successful than a much-maligned first attempt, “The Times They Are a-Changin.’”

In addition, “North Country” star Mare Winningham was nominated for lead actress. Winningham was raised Catholic, but converted to Judaism in her 40s, writing and performing a “Convert Jig” for the occasion.

“Mr. Saturday Night,” Billy Crystal’s musical comedy based on his 1992 film about a fading TV comic, received five nominations, including best musical and best actor for Crystal. He also co-wrote the nominated book with Jewish writing duo Lowell Ganz and Babaloo Mandel. Featured actress Shoshana Bean, who is Jewish, was also nominated, as were the Jewish writers of the show’s music, composer Jason Robert Brown and lyricist Amanda Green.

While “Funny Girl” failed to light up the revival circuit, several other Jewish-adjacent revivals did. “Company,” a gender-swapped restaging of the Stephen Sondheim classic, scored nine nominations, including best revival of a musical; the show was initially intended to be timed to Sondheim’s 90th birthday, but COVID-19 delays resulted in it not opening until after his death this past November at 91.

“Caroline, or Change,” Tony Kushner’s Civil Rights Era-set musical about a Black maid who works for a Southern Jewish family in 1963, received three nominations, including for best revival of a musical.

And “American Buffalo,” a revival of caustic Jewish playwright David Mamet’s 1975 play about a junk shop, was nominated for four Tonys, including best revival of a play, as was “Take Me Out,” an exploration of a professional baseball player coming out as gay, by Jewish playwright Richard Greenberg.

“How I Learned to Drive,” a revival of the Pulitzer-winning 1997 play dealing with taboo topics such as pedophilia and incest, was nominated for three Tonys, including best revival. Its author, Paula Vogel, had a Jewish father and has also written other Jewish-themed plays.

It’s been a rough year overall for Broadway, which returned after a two-year pandemic hiatus and saw multiple logistical hiccups as some cast members contracted COVID-19. Many shows had scrambled to premiere in time for the Tony deadlines. The 75th annual ceremony will air June 12 on CBS and Paramount Plus. PJC