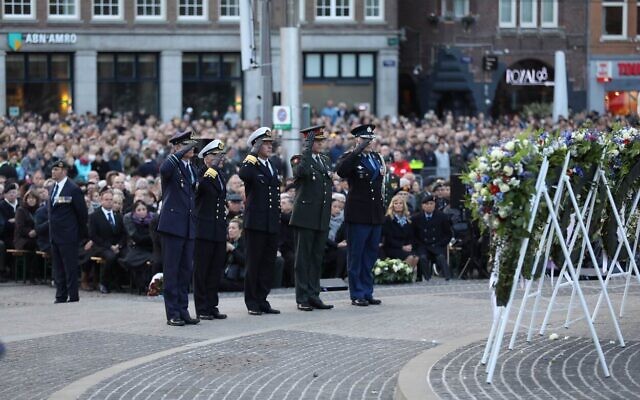 Soldier salute during the official commemoration for Holocaust victims and war casualities in Amsterdam, the Netherlands, on May 4, 2019. (Ministerie van Defensie)

The BIJ1 party, which defines itself as devoted to “antiracism and decolonialization” and advocates for “official apologies for slavery and colonial occupation and bearing of the legal consequences,” made the call in a draft of its program in the March 2022 municipal elections in Amsterdam, the news site Jonet.nl reported last week.

At Amsterdam’s May 4 official memorial commemoration for victims of the Holocaust and Dutch casualties of war, “Indonesian, Surinamese, Korean, Iraqi etc. victims of Dutchmen (or violence supported by the Netherlands) are not commemorated,” the text said, labeling this as “inherently racist.” As long as this is the case, “Amsterdam must not platform” the event, the draft program read.

Reports in the Dutch media about the document by BIJ1, which in the March general elections won one out of 150 seats in the Dutch parliament, generated protest by Jewish groups. Ronny Naftaniel, chairman of the Central Jewish Board of the Netherlands, said it was “astonishing.”

Jazie Veldhuyzen, a BIJ1 party member running for a seat on the city council, said the party has changed its position. It does not really seek to have the event scrapped, but to “make it more inclusive,” he told the RTVNH broadcaster.

The party, led by Sylvana Simons, was one of two movements represented in the Amsterdam city council in 2018 that declined to sign a joint declaration on fighting antisemitism. The reason stated for this was that the definition for antisemitism was that of the International Holocaust Remembrance Alliance, which lists some examples of vitriol against Israel. Critics of the definition say it stifles free speech on Israel.

BIJ1 supports a blanket boycott of Israel, citing its commitment to international law and Palestinian rights. BIJ1 is not on record as calling to boycott any other country. Its website says it is committed to fight antisemitism. PJC