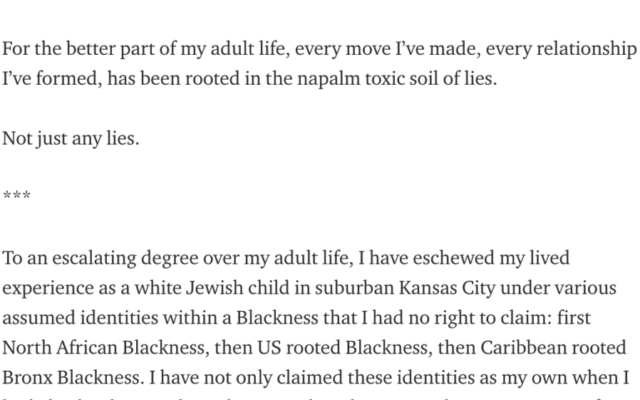 In an online post published Thursday, someone claiming to be George Washington University professor Jessica Krug stated that she had spent her adult life falsely claiming to be Black.

“To an escalating degree over my adult life, I have eschewed my lived experience as a white Jewish child in suburban Kansas City under various assumed identities within a Blackness that I had no right to claim,” the post reads.

Krug, who studies Africa and the African Diaspora, did not immediately respond to requests for comment Thursday confirming whether she was the author of the post.

The post, published on blogging platform Medium, states that Krug has alternately claimed “North African Blackness, then US rooted Blackness, then Caribbean rooted Bronx Blackness.” It cites mental health issues stemming from “severe trauma that marked my early childhood and teen years” as the impetus for assuming false identities.

The post attracted significant attention on social media Thursday, with many users on Twitter connecting the situation to that of Rachel Dolezal, a white woman who claimed to be Black and became a chapter president of the NAACP in Washington state.

“WOW. So a white Jewish woman from Kansas City has been lying her whole adult life by pretending to be black,” Washington Post opinions editor Karen Attiah wrote on Twitter.

Krug’s book “Fugitive Modernities: Kisama and the Politics of Freedom” was a finalist for the 2019 Harriet Tubman Prize from the Lapidus Center for the Historical Analysis of Transatlantic Slavery.

In the introduction, Krug describes the book as a love letter to, “My ancestors, unknown, unnamed, who bled life into a future they had no reason to believe could or should exist.”

“It is a love letter for all of those who have been murdered fighting for freedom, and all of those who stay dying because we have not yet achieved it. It is a love letter for my siblings in solitary, from Rikers to San Quentin, for my cousins being held on gang charges, for my femmes turning tricks. For those who will never be cloaked in the protective veil of innocence woven from five centuries of the and dismemberment,” Krug writes.

The George Washington University did not immediately respond to a request for comment Thursday. PJC

This piece originally appeared in the Washington Jewish Week, an affiliated publication to the Pittsburgh Jewish Chronicle.