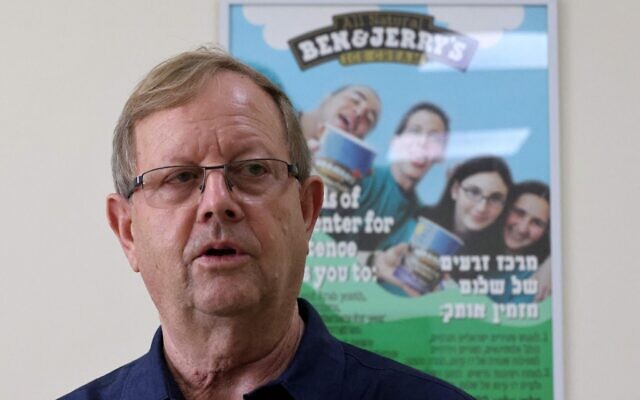 Avi Zinger, who bought the company’s Hebrew and Arabic branding from parent company Unilever last month, recently told an Israeli news outlet that he had the right to do so, and even proposed renaming “Chunky Monkey” to the Biblical name for the West Bank.

And that threat, Ben & Jerry’s lawyers say, is reason enough why the sale shouldn’t legally go through.

“If Ben & Jerry’s wanted to protest the current sale and issue an ice cream flavor that supported Palestinian efforts,” their lawyer said Monday in a court hearing in New York, then they would legally be forced to transfer the ingredients, formula and labeling for the flavor to Zinger, who could then rename it something “supporting Judea and Samaria.”

The ice cream maker’s attorneys cited Zinger’s July interview with Haaretz, in which he declared “I can do what I want” with the brand, in Monday’s hearing as the brand sought an injunction against the sale. Selling “the exact same quality product with the exact opposite social stance” in Israel and the Palestinian territories, lawyers said, would constitute a breach of the company’s unique agreement allowing its board to dictate its social mission.

The suit follows more than a year of controversy and legal wrangling since Ben & Jerry’s announced it would no longer sell ice cream in “occupied Palestinian territories.” In late June, facing several lawsuits and pressure from the pro-Israel community, Unilever said it would sell the brand’s Israeli business interests to Zinger’s company, American Quality Products, Ltd., which intends to use the same intellectual property to sell its products in Israel and the Palestinian territories under Hebrew and Arabic labels.

But Ben & Jerry’s is now suing to block the sale.

Unilever’s 2000 acquisition agreement with Ben & Jerry’s gives the company’s board wide discretion over the brand’s “social mission,” which its lawyer, Joseph Ahmad, said Monday was being jeopardized by Unilever’s sale agreement with Zinger. Ben & Jerry’s has a history of making ice cream that promotes its Jewish founders’ progressive politics, such as a flavor supporting a bill from “Squad” member Rep. Cori Bush. The Israeli licensee, the company’s counsel said, now had the right to make “the exact same quality product with the exact opposite social stance.”

“Instead of ‘peace pops,’ they could make ‘hate pops,’” the counsel offered as another example.

In response, David Marriott, the attorney for Unilever’s U.S. entity, Conopco, said the company’s deal with Zinger had already closed and that the Ben & Jerry’s board lacked the authority to challenge it. In addition, Marriott questioned the argument that the sale would compromise the company’s social mission, saying, “Perceptions of unidentified third parties are not irreparable harm.”

The hearing lasted just over 30 minutes, and ended with U.S. District Judge Andrew Carter Jr. saying he would consider the arguments and render a decision at a later time.

The hearing took place a week after mediation attempts between the two parties broke down. Tensions remain high: In the lead-up to the hearing, Ben & Jerry’s accused Unilever of freezing the salaries of its board of directors last month as a pressure tactic ahead of planned mediation.

During the hearing, Ahmad said that, during the failed mediation, Unilever CEO Alan Jope had said that “Ben & Jerry’s should stay out of geopolitics,” which Ahmad compared to Fox News host Laura Ingraham telling NBA superstar LeBron James to “shut up and dribble” in 2018. Ingraham’s remarks were widely condemned, with some commentators saying she was employing a racist dog whistle. PJC