After 20 years of constant play, the past 15 months were particularly difficult for David Vatz. Without the chance to suit up, strategize field position, chase down discs and compete for a championship, Vatz, a decorated player of ultimate (or, as it’s colloquially known, “ultimate frisbee”), found himself itching to get back on the field.

Between high school, college, club teams and professionally, “it’s been a part of my life since 2001,” said Vatz, 35. “It’s weird not to have a year with it.”

That pandemic-induced drought will end on June 5 when the Pittsburgh Thunderbirds, of the American Ultimate Disc League, open their 12-game season against the Boston Glory at J.C. Stone Field in North Park.

Vatz, a Thunderbirds assistant coach and the team’s all-time leading scorer, is counting down the days until ultimate begins again.

For the uninitiated, ultimate is similar to football, soccer or rugby: Players move down a field attempting to outscore their opponents by, like football, passing a disc to teammates around the field until they reach the opposing end zone. Unlike football, however, ultimate players may not take steps while holding the disc.

Turnovers are committed after an interception, an incomplete pass is made or the disc is tossed out of bounds.

The biggest differentiator between ultimate and similar sports may be that there are rarely referees; players call their own fouls and abide by a code of mutual respect and trust, or “Spirit of the Game.”

Ultimate has a “lot of representation in the Jewish community,” said Vatz, a Greenfield resident who celebrated his bar mitzvah at Temple Emanuel of South Hills.

Vatz isn’t sure why so many Jews play the game, but speculated it may be connected to being introduced to the sport at overnight camps — although Vatz doesn’t recall sprinting for lofted frisbees during his time at URJ Camp Harlam in Kunkletown. He began playing ultimate as a student at Mt. Lebanon High School and continued at the University of Pittsburgh, joining an Oakland-based squad that competed for a national championship. After college, Vatz played for several teams, including the Thunderbirds.

He said that there’s been a fair number of Jews suiting up beside him at every stop. 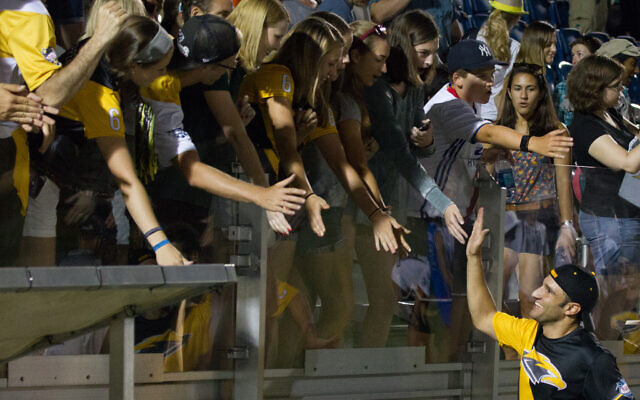 Having been a part of the sport for the past two decades, Vatz has noticed its popularity grow and that players are treated better, and he noted that concussion protocols have advanced significantly over the years.

For most athletes — regardless of sport — practice, training and travel is a part of life, and it’s no different with ultimate. But unlike those employed by the Steelers, Penguins or Pirates, players at the highest level of ultimate are usually competing for small change, explained Vatz.

“It’s definitely not enough money to pay the bills,” he said. “You get a small check each game. For the most part, teams are paying for your travel and your uniforms. People are usually doing it because it’s fun.”

In addition to loving the game itself, Vatz appreciates the feeling of being part of a team.

“Part of the magic of team sports is that you’re trying to accomplish something with a group of people,” he said. “In 2005, when we made nationals for the first time with Pitt, we were a team of 14 guys.” The squad was smaller than most, but “banded together as a group and decided we’re going to do whatever was necessary.”

Battling against better clubs and eking out close games “was something I did with this group of guys,” said Vatz. “And to this day those people feel like my family, my brothers.” PJC